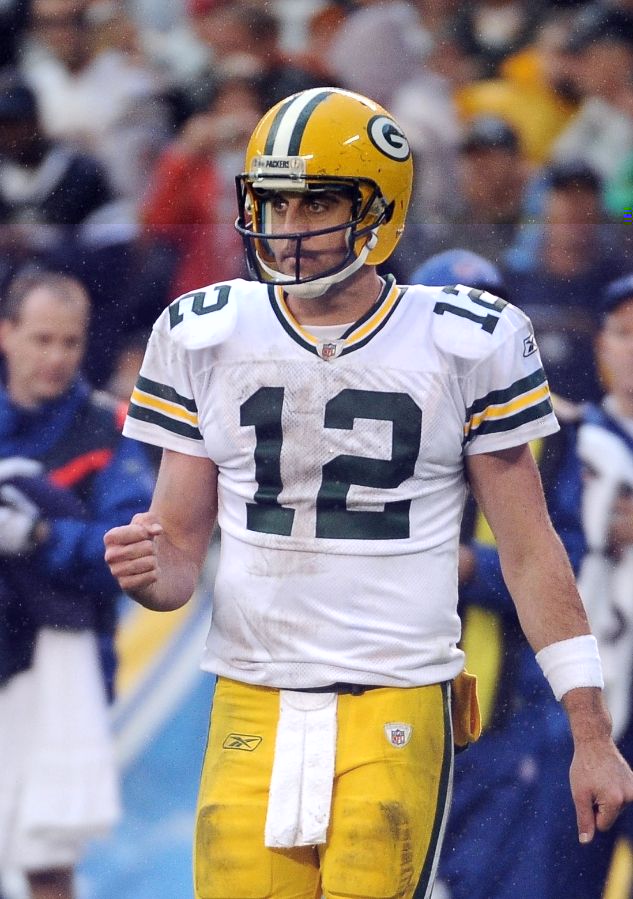 Photo: Aaron Rodgers and the Packers are 8-0 and looking to repeat as Super Bowl champions. They face the Vikings in week ten.

Photo: Aaron Rodgers and the Packers are 8-0 and looking to repeat as Super Bowl champions. They face the Vikings in week ten.

The defending champion Packers are rolling. Green Bay beat the Chargers last week to remain perfect at 8-0, and it doesn't seem like Aaron Rodgers & co. are slowing down anytime soon.

On Thursday night, the Raiders upset the Chargers in a 24-17 win highlighted by 147 yards on the ground from Oakland running back Michael Bush.

Week ten offers a bunch of interesting divisional matchups. Like always, our experts are back to dissect the week's games and predict the outcomes.

Eli says:
Hmm. I'm tempted to go with the Bears because they won when I took them against the Eagles last week. But Detroit is coming off a bye and should be plenty rested. Detroit escapes a close one at Soldier Field.
Langston says:
Lovie Smith was probably right in saying that the Bears have been underrated so far this year. The Lions are still better, though. If Matthew Stafford throws anything, anywhere near Megatron, Detroit will be fine.
Jacob says:
Stafford should be fully healthy and the Lions should come off the bye week strong.
Molly says:
I have no idea what to do with this pick because both teams are playing very well this season. Guess I'll just go with the team with the better record…

Eli says:
I still think it's crazy how much of a difference the injury of one player can make...
Langston says:
Indianapolis could be the next team to join the Big 12. At least they'll have more even competition there...
Jacob says:
The Colts might be the worst team that I have ever seen play. Their -155 point differential is twice as bad as any other team's in the NFL except for the Rams. They are giving up over 30 points a game, enough to make even the Jaguars offense look good.
Molly says:
A winless season is where the Colts are headed at this point.

Eli says:
We got a look at the good Tim Tebow last week. If he can have a repeat performance, the Broncos win easily.
Langston says:
Last week's loss demonstrated how inflated the Chiefs' record has been. Their wins have been either close, lucky, or against the Colts, and their losses have been bloodbaths. I'm still not sold on Tim Tebow, but the Broncos will pull this one out.
Jacob says:
The Broncos are not a serious playoff threat, but it's not out of the question; any team that plays in the AFC West has a chance at reaching the post-season. That is, other than the Chiefs. Don't pay attention to the 4-4 record. Kansas City is awful in almost every way.
Molly says:
The Chiefs had a crushing loss to the Dolphins last week, so they are probably feeling a comeback week against the Broncos. Plus, Tim Tebow seems to be hitting or missing so far.

Eli says:
Another tough matchup. It's hard to believe that the Bengals are as good as their record suggests, but then again, I haven't sat down and watched them play a full game. I'll go with the Steelers based purely on gut instinct.
Langston says:
Not many people could have predicted that, going into their week ten matchup, the Bengals would be ahead of the Steelers. Cincinnati has played incredibly well so far, but the Steelers will be extra motivated by last week's last-minute loss to Baltimore.
Jacob says:
The Bengals aren't that good, are they? They've had one of the easiest schedules so far, which might be the only explanation for their 6-2 record. This is their first game of two against the Steelers, and I'm betting they don't win either one.
Molly says:
The Steelers are coming off a tough loss to the Ravens, but they are sure to beat the Bengals.

Eli says:
The Cowboys won in convincing fashion last week, 23-13; the Bills failed to get going offensively and fell to the Jets 27-11. Expect a heavy dose of rookie running back DeMarco Murray. Dallas wins.
Langston says:
The Bills have been struggling lately, but they'll do fine in Dallas.
Jacob says:
Both teams have been great at home so far, while sub-par on the road. Both teams have a lot to fight for as wild card contenders, and a win for either team will be huge.
Molly says:
I refuse to pick the Cowboys two weeks in a row; it only helps that the Bills are playing well this season.

Eli says:
Atlanta is one of the most balanced teams in the league. After struggling a bit at the start of the season, the Falcons have been on a tear as of late. It'll be close, but expect Atlanta to pull this one out to grab a quality win.
Langston says:
The Saints' loss in St. Louis was a fluke; New Orleans is still one of the best teams in the NFC.
Jacob says:
The Saints bounced back strong after a loss to the Rams, and I still think they have the best chance in the NFC at dethroning the Packers. The Falcons aren't bad, either, but no team is going to stop Drew Brees.
Molly says:
Unless the Saints want another upset like the one against the Rams (yes, we're still talking about that), they will work hard to defeat the Falcons.

Eli says:
Feed Steven Jackson. The man's a tank.
Langston says:
In the last three weeks, Colt McCoy has thrown more interceptions than touchdowns. Then again, so has Sam Bradford, who hasn't thrown a TD since week four. McCoy will play slightly less badly this week.
Jacob says:
The Rams lost in overtime to the Cardinals last week, but it was not a bad game. The St. Louis D held very strong and the Browns will have trouble scoring points.
Molly says:
Toss-up between two average teams.

Eli says:
Nothing is more frustrating than watching the Redskins play each Sunday. Nothing.
Langston says:
The Dolphins' efforts finally paid off last week, and they will keep their momentum going Sunday in Miami.
Jacob says:
The Redskins are plummeting. They are averaging 11 points a game in their last four games, all of them losses. The Dolphins finally got their first win and can gain a little momentum at home against the 'Skins.
Molly says:
I probably won't be picking the Redskins for the rest of the season. Sorry 'Skins fans!

Eli says:
Arian Foster rushed for 124 yards and a score against Cleveland in week nine. Look for Foster to have a field day against the Bucs' D. Houston wins and improves to 7-3.
Langston says:
The Texans have played well as of late and should be able to beat the Bucs.
Jacob says:
Both teams have a realistic shot at the playoffs, but the Texans, on top of the AFC South, are almost a sure bet. The Buccaneers on the other hand have played very badly for a 4-4 team.
Molly says:
The Texans have been running the ball extremely well lately, and their defense continues to climb the charts.

Eli says:
Both of these teams have looked good at times and terrible at times. I'll go with the rookie QB and pick the 2-6 Panthers.
Langston says:
Chris Johnson is overpaid and the Titans are overrated. The Panthers, on the other hand, will run all over Tennessee's weak D.
Jacob says:
I have not been impressed by anything the Titans have done so far. The Panthers meanwhile have been able to squander multiple 400 yard passing games but this time they will pull it out.
Molly says:
I have faith in Cam Newton. Go, rookie, because you don't have the defense to back you up.

Eli says:
Philly struggled on Monday night against Chicago, but Mike Vick and the Eagles should be able to turn things around against the Cardinals. It's hard to pick a team led by John Skelton.
Langston says:
Don't let the one-game difference between these two teams' records fool you – Philadelphia is a much better team. The Eagles pick up a much-needed win at home.
Jacob says:
The Eagles couldn't pull it out against Chicago, but the Cardinals are nowhere near as good as the Bears. Philly is on the upswing and Arizona should not be a problem for the solid Eagles.
Molly says:
The Cardinals' have a horrible secondary, and the Eagles need to recover after that crushing loss against the Bears.

Eli says:
Unless Marshawn Lynch puts the team on his back, Baltimore should cruise to its seventh win of the season.
Langston says:
This is a no-brainer. Then again, everyone expected Baltimore to win its games against Jacksonville and Arizona. If the Ravens start playing well against bad teams, they will be the best team in the AFC.
Jacob says:
It will be close. The Ravens will manage to make their fans forget everything that they just did in Pittsburgh with a tight game against the Seahawks.
Molly says:
It's the Ravens... against the Seahawks… pretty self-explanatory.

Eli says:
The 49ers looked a bit out of sync last week, only dropping 19 points on the lowly 'Skins. The Giants beat New England 24-20 thanks to a solid effort from Eli Manning.
Langston says:
I have no reason or explanation for this – I never pick Giants games right, anyway.
Jacob says:
This is part two of the five-game hell that is the Giants' schedule, but the win against New England last week says good things about New York.
Molly says:
This is definitely going to be a good game, and it's hard to pick against the 49ers because of the spectacular season they are having.

Eli says:
I completely buy into the "a good defense beats a good offense" theory. Jets win at home.
Langston says:
Dropping Albert Haynesworth won't help the Pats' defense that much – he only played a few snaps a game anyway – but New England will score enough points to win and take first place in the AFC East.
Jacob says:
Last week, my NYJ pick worked out and I'm doing it again. I will absolutely ignore the stats and go with my Jets.
Molly says:
The Patriots' defense is not keeping up their half of the deal right now, and Tom Brady threw way too many picks last game, so the Jets' defense will be able to take advantage of the Patriots' mistakes.

Eli says:
Need I explain myself?
Langston says:
Maybe A-Rod will teach Christian Ponder a thing or two. Like how to be the best quarterback in the NFL. Or how to do the "Discount Doublecheck” dance.
Jacob says:
It's not going to be pretty.
Molly says:
Undefeated season for the Packers? Maybe, but they will have to get through the Vikings first, which shouldn't be hard considering they're 2-6.