Turkey and football: the perfect combo 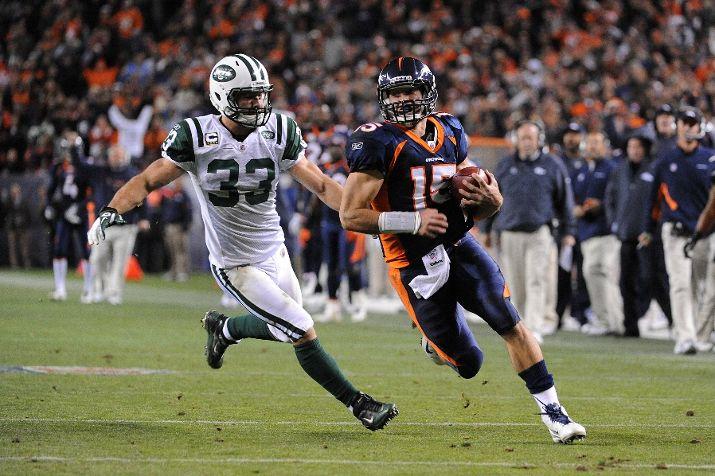 In week eleven, Tim Tebow ran wild on the Jets' defense, the Lions dropped 49 on Carolina, and the Cowboys beat out the 'Skins in overtime – another solid week of football in the books.

It's Thanksgiving time, and here at SCO we're thankful for another week of great NFL action. But before you stuff your face, make sure to check out our week 12 predictions. The Packers and the Lions kick off at 12:30 on Thursday, the first of three matchups on Turkey Day. This Thanksgiving, we recommend you kick back, relax, huddle around the TV with your family and watch some pigskin. Gobble gobble!

Eli says:
The Lions will have a lot on their plate on Thursday when they face the 10-0 Packers. Gotta love Thanksgiving jokes.
Langston says:
I'm really looking forward to this Thanksgiving Day game. Though the Lions could use a big win at home, Aaron Rodgers isn't about to let that happen.
Jacob says:
Matthew Stafford was exposed early last week against the Panthers, but he recovered well and finished with a five-touchdown game. Regardless, he definitely has weaknesses and the Packers secondary can hold him in check, while Rodgers does his thing like always.
Molly says:
I think the Lions are going to give the Packers a run for their money, but I'm not ready to see the Packers lose yet.

Eli says:
Both of these teams are on three-game win streaks, but Dallas is the better team. Expect a heavy dose of rookie running back DeMarco Murray. Cowboys improve to 7-4.
Langston says:
Upset! Dallas looked a bit shaky last week, and Miami has been on a roll. Expect to see some upset Cowboys fans on Monday.
Jacob says:
Both teams have won three in a row, but the Dolphins are still a 3-7 team and I won't pick them against the division-leading Cowboys.
Molly says:
The Cowboys can definitely have off-days, but because they're playing Miami, I'm sure they can pull out a win.

Eli says:
The San Francisco 49ers are the second-best team in the NFL. Is this real life?
Langston says:
Between the sibling coaching rivalry, Thanksgiving Day, and two great defenses, this game is too good to be shown on NFL Network. The Ravens will continue their trend of playing to the level of their opponents and come away with the win in Baltimore.
Jacob says:
The Ravens haven't lost at home all year and the 49ers haven't lost on the road all year. Based on schedule strength, I think the Ravens are the better team and can take this Thanksgiving showdown.
Molly says:
Maybe I should pick the 49ers, but I have full faith in my team (why else would my family choose to wear all purple for Thanksgiving?). This is no doubt going to be a great game, and both teams are going to bring it. I have a feeling the Ravens are going to feel it more.

Eli says:
Minnesota needs more talent than Adrian Peterson to compete in the toughest division in the NFL. The Vikings are 1-4 over their last five games and they'll have a hard time against the 6-4 Falcons.
Langston says:
Poor Vikings. Adrian Peterson can run all he wants, but the Minnesota defense isn't going to win them any tough games.
Jacob says:
The Falcons have had some consistency problems but a win against the last place Vikings should be no problem.
Molly says:
Toss-up.

Eli says:
Even without Matt Schaub at QB, the Texans are still far and away the better football team. Arian Foster gets 30+ carries; Houston wins big. Lock it up.
Langston says:
The Texans' week 11 bye won't wreck their recent winning ways. One of Jacksonville's three wins has been over the Colts – the other was over the Ravens, who play awfully against bad teams – so the Jaguars might as well be 1-9.
Jacob says:
Houston is going to take a hit without Schaub and I'm not really sure why Matt Leinart is an NFL quarterback, but the Jaguars are unlikely to score more than ten points against the strong Houston defense.
Molly says:
The Texans are going to be able to deliver against the Jaguars thanks to plenty of scoring opportunities.

Eli says:
Tennessee has the better record, but Tampa Bay displayed an improved offense against Green Bay in week 11, so I'm picking the Bucs in a slight upset. Josh Freeman threw for 342 yards and two scores, while running back LaGarette Blount went beastmode on the Packers' defense.
Langston says:
Yes, the Bucs are on a four-game losing streak, but remember: those losses were against the Bears, Saints, Texans, and Packers. Not exactly the easiest schedule.
Jacob says:
The Bucs have been extremely disappointing this season, while at .500 the Titans are in a great position to seize the division. Hasselbeck can propel them at home.
Molly:
The Titans should have an opportunity to move to the top of their division, and they will have to battle hard against the Buccaneers.

Eli says:
Both of these teams are pretty terrible. I'll go with the Cardinals, who are slightly less terrible.
Langston says:
The Cardinals have won two out of their last three, one of which was over this Rams team. If John Skelton can limit his interceptions, Arizona will be able to hold off the awful Rams.
Jacob says:
The Rams' mediocre defense will look great, as every defense does, when playing John Skelton and the Cardinals. The game is meaningless with the division almost clinched for the 49ers, but the Rams can at least win a few to avoid utter embarrassment.
Molly says:
The Cardinals still have a lot to improve on, but they make progress every game. The Rams have been disappointing the last couple weeks.

Eli says:
Cincinnati took a step back in the AFC North standings last week, falling to Baltimore 31-24. But don't sleep on the Bengals. They're still a good team, and they'll only continue to improve with a rookie QB under center.
Langston says:
Cincinnati needs this win to stay in the race for the AFC North, but given that the Bengals will need to overtake the Steelers and Ravens, I don't anticipate them making the playoffs.
Jacob says:
The Bengals schedule has started to toughen up, and their two game losing streak is proof. The Browns, however, will be a nice break and an important win if the Bengals want to stay in the playoff picture.
Molly says:
The Bengals played a great game last week, and will be able to pull out an important division win this week.

Eli says:
New York is struggling. The Jets have lost two straight games and are sitting at 5-5. Look for them to turn things around when they face another .500 team, the Bills, who fell 35-8 to the Dolphins in week 11.
Langston says:
The Bills' week nine loss to the Jets started their losing streak; their week 12 victory will end it.
Jacob says:
The Bills are done. Three losses in a row by a combined scored of 106-26 has officially returned them to their place as a pathetic team and easy win.
Molly says:
The Bills are playing pretty terribly after a solid start to the season.

Eli says:
Choosing the Colts' opposition is always the easiest pick of the week.
Langston says:
I'm most excited for this game because I have Cam Newton on my fantasy team. Get ready for a blowout.
Jacob says:
The Colts are going winless.
Molly says:
I feel like I'm constantly repeating myself here, but sorry Indy…

Eli says:
I'm fed up with the Redskins. They're a joke.
Langston says:
Washington looked much better last week against Dallas. If the 'Skins keep up their play, and make a couple field goals, they'll take care of the Seahawks.
Jacob says:
The last time I picked the Redskins to win a game was week two against the Cardinals, but they are playing an NFC West team not named the 49ers, so why not.
Molly says:
I honestly think the Redskins have a chance to win this game, but then I realized that this game will be played at Seattle, and there's no way Rex Grossman can handle the atmosphere there. Sorry 'Skins fans.

Eli says:
Where did Chicago come from? It seems like everyone was sleeping on the Bears, and now here they are, five straight wins and putting pressure on the Lions and Packers in the NFC North. And then tragedy strikes for the Bears' season. Jay Cutler is out six to eight weeks with a broken thumb. Raiders win.
Langston says:
Caleb Hanie has a career QB rating of a measly 39.6; he can't be expected to fill Jay Cutler's absence successfully.
Jacob says:
The Raiders are really bad. The Bears are playing without their starting QB. Bears I guess…?
Molly says:
Since Jay Cutler won't be returning, which is extremely unfortunate for the Bears, I have to give this one to the Raiders.

Eli says:
Without Tom Brady, the Patriots are a .500 team at best. Good thing they have Tom Brady.
Langston says:
New England has won a couple in a row, but I'm betting on Vince Young, Michael Vick, or both of them playing well this week in Philadelphia.
Jacob says:
If Vince Young starts, the Eagles will lose. If Michael Vick starts, the Eagles will still lose.
Molly says:
This is going to be a good game, but I have to go with the Patriots because I feel that they are making a comeback after a few bad games.

Eli says:
I'm so confused. Is Tim Tebow good or bad? Stop playing mind games!
Langston says:
The only thing Tim Tebow is good at is winning. Somehow, he just gets the job done.
Jacob says:
Tebow is a winner and the Chargers have an uncanny knack of finding a way to lose. The Broncos will move into first with a win.
Molly says:
Denver's passing game is too good, and the Chargers' secondary won't be able to keep up.

Eli says:
The Chiefs picked up former Bronco Kyle Orton to replace injured Matt Cassel, but that won't make any difference against the Steelers. Pittsburgh improves to 8-3.
Langston says:
It looked like the Chiefs had a chance last week, until their awful second half. Pittsburgh will win this easily.
Jacob says:
The Chiefs got smashed by the Patriots on Monday night, and now they'll get smashed by the Steelers on national television for the second week in a row.
Molly says:
This matchup is kind of a joke. I think it's pretty obvious that the Steelers are going to take this one.

Eli says:
New Orleans has won two straight and just had a bye week, while the Giants lost to the 4-6 Eagles in week 11. As long as Drew Brees airs it out, as he usually does, the Saints should take care of the G-Men.
Langston says:
Breesy's got it. This loss, with the Cowboys' loss and Eagles' and Redskins' wins, will make the NFC a lot closer, making for a very interesting month of December.
Jacob says:
If anybody can beat the undefeated Packers, it's the Saints. Meanwhile, the Giants loss to Philadelphia was more than pathetic. The Giants can keep it close, but a Saints win is assured.
Molly says:
Eli Manning throws at least two picks. Drew Brees isn't making much of a splash this season, but I have faith in him for this Monday night matchup.