The playoffs kick off as Abel takes lead

As the playoffs kick off we have a new leader in the SCO expert predictions. Abel has overtaken Sam and Jacob and claimed the top spot. This week the Chiefs travel to Indianapolis, the Saints face off against the Eagles, the Chargers play the Bengals and the 49ers match up against Aaron Rodgers and the Packers. 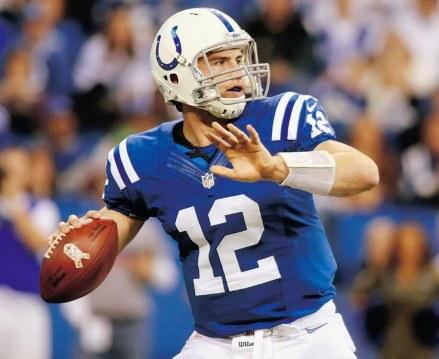 Photo: Colts' QB Andrew Luck is leading the Colts to the playoffs for the second straight year.

Photo: Colts' QB Andrew Luck is leading the Colts to the playoffs for the second straight year.

Abel says: They say it's hard to beat the same team twice, and I don't think the Chiefs will suffer the same fate that they did in week 16. Both Tamba Hali and Justin Houston return to boost the Chiefs' pass rush and that should greatly help the back end of that defense, especially without the presence of a true number one receiver in Reggie Wayne for the Colts.
Sam says: At the start of week nine this season, the Chiefs' defense was ranked 1st in the NFL, now, it has fallen to 24th. Also, the Chiefs are 0-5 against AFC playoff teams this year, accounting for all of their losses. Meanwhile, the Indianapolis defense has dramatically improved of late and the offensive line is finally starting to bring it together. Chiefs' QB Alex Smith is a good one to keep you in a game and not give it away but not a good one to constantly score in the playoffs.
Jacob says: The Chiefs finished with an 11-5 record this season, but unfortunately for them, they're in the same division as the 13-3 Broncos, so they start the playoffs away from the comfort of Arrowhead stadium. Furthermore, their 11-5 record isn't as great as it looks. They finished 2-5, finally cooling off following a 9-0 start. Secondly, the Chiefs had a 1-5 record against teams who finished above .500 this year, with the only win coming in week 3 against the Eagles, who were yet to find that Nick Foles was the perfect fit for their offense. I don't think the Chiefs are as good as 11-5 says they are, and on the road they don't stand a chance.
Rohan says: In this playoff matchup the high flying surprises of the league in the Chiefs are playing the semi consistent but always potent offense of the Colts. In this matchup I have to go by Lady Luck and the fact that since they are playing in front of a home crowd the Colts will have extra reason to win. I see no reason that Luck will not step up.

Abel says: The Eagles can beat you both ways on offense. Although they're dead last in passing defense, I think their running game in the cold weather (and at home) will be enough to get by Drew Brees and the Saints.
Sam says: Unlike previous Eagles' defenses, they have the athletes now to hang with Wide Receivers on the outside and Tight Ends on the inside. The offense is potent and if they can get Drew Brees and company behind early, they can win. But with both amazing offenses and coaching geniuses, this should be the closest game of the weekend.
Jacob says: Here's the deal, short and sweet: the Saints were founded back in 1967, and have a total of, that's right, you guessed it, zero road playoff wins. Now with the Philadelphia Eagles looming, it seems that that trend will in all likelihood continue. Look for Lesean McCoy to have a field day against the weak Saints' defense.
Rohan says: This game is outside in cold weather with wind. All of these factors are likely to trouble a dome team in the Saints who are used to perfect conditions. For all the hype the Saints showed their achilles heel in Seattle when they were demolished by the Seahawks. Although the result of this game will not near that one, the Eagles still have the prime advantage.

Abel says: I'm assuming Good Andy Dalton shows up since he's playing at home. The Bengals should be chomping at the bit to end this two year drought in the first round of the playoffs.
Sam says: In the freezing weather game that will take place in Cincinnati, defense will win the game. In that department, the Bengals rank 5th in the NFL in rushing and passing defense. They are balanced and have the front seven and secondary working together. The Bengals also have two of the best coordinators in football in Jay Gruden (offense) and Mike Zimmer (defense). I think the right game will be called by both of them to ensure a Bengal victory at home where they have not lost all season.
Jacob says: The Chargers squeaked into the playoffs in week 17 while the Bengals have had a tremendous season and come into the playoffs tied for second in the AFC in point differential at +125. I've got Cincinnati.
Rohan says: I know the Bengals have the better defense and they are very good at home but I am still not impressed with Andy Dalton as a quarterback. I believe P-Riv will lead his Chargers team to an upset win after they got into the playoffs in such a dramatic game against the Chiefs.

Abel says: There isn't much to say here other than that the 49ers are simply the better team. There is the possibility of an upset as the Packers have the best QB in the league and are playing at Lambeau, but I don't see it.
Sam says: Many believe the 49ers are among the best teams in the playoffs, I agree with them. They are 12-4 this season with all four of their losses coming to playoff teams. They share a 6-2 record at home and on the road showing they are not dependant on either to win and they are ranked in the top seven in the NFL in passing and rushing defense. That defense should travel well in the frigid cold and led by Head Coach Jim Harbaugh. I expect the 49ers to get a big time road playoff win.
Jacob says:
Rohan says: Against a Green Bay team featuring Aaron Rodgers at way less than 100 percent and the possibility of empty seats at Lambeau, I think it is the prime time for the 49ers to get a win.