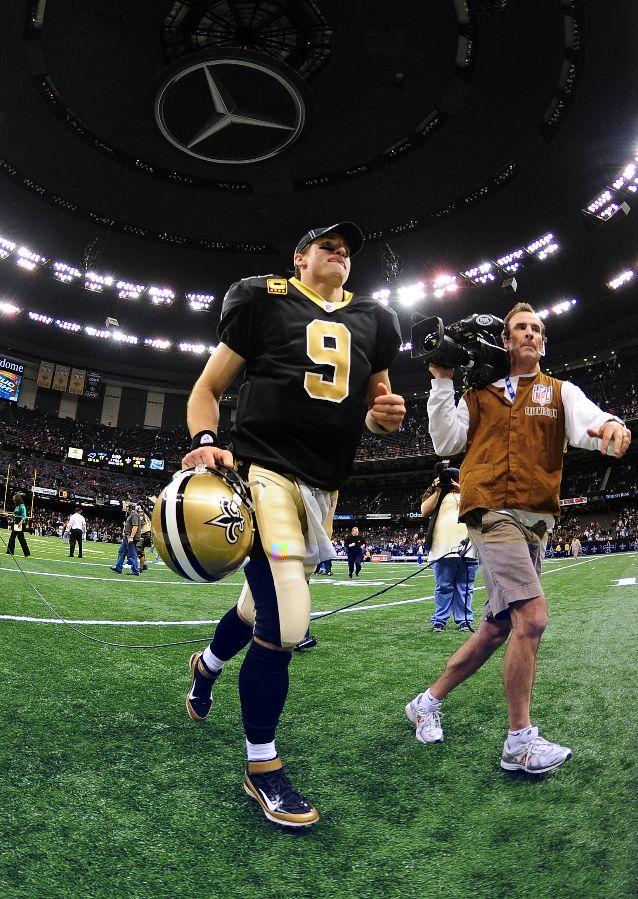 Photo: Drew Brees just finished another phenomenal regular season. Can he keep it up in the postseason?

Photo: Drew Brees just finished another phenomenal regular season. Can he keep it up in the postseason?

We're back with predictions for the four wild card games: Bengals-Texans, Lions-Saints, Falcons-Giants and Steelers-Broncos. Don't agree with our picks? Feel free to speak up in the comments section.

Eli says:
Let me start off by saying that neither of these teams is going to win two playoff games. The Texans have played terribly the past few weeks, but the Bengals haven't impressed, either. I'm going with Houston simply because they'll have the best player on the field in Arian Foster.
Langston says:
It appeared that TJ Yates would be able to hold the offense together enough for the defensive wonder in Houston to be successful, but after consecutive losses to three teams that aren't making the playoffs, I'm not so sure. Cincy will steal this one on the road.
Jacob says:
The Texans are suffering without Schaub. Since TJ Yates' impressive start, the Texans have been going downhill to the point where midseason signing Jake Delhomme is now the starting quarterback. The Texans are coming off three losses to the Titans, the Colts and the Panthers; not exactly the top teams in the NFL. Cincy can be one of two AFC wild card teams to move on to the second round.
Molly says:
The Texans really could have used a week off after all of their team's injuries, but unfortunately they don't have one, so the Bengals will have the upper hand.

Eli says:
The Lions were without a few key defensive players when they fell to the Saints in week 14. Drew Brees is on an absolute tear right now, but I think the Detroit D will rattle him a bit and give Matt Stafford & co. enough possessions to get the job done. Upset in the Super Dome come Saturday night.
Langston says:
The Saints are the hottest team in the NFL right now. It's unfortunate that the Lions have to play them in the first round; their season will end with bitter memories of Drew Brees' brilliance.
Jacob says:
The Lions' close loss to Green Bay last week will hurt them badly as they now have to face New Orleans instead of New York. Their defense was run over by Matt Flynn and Drew Brees will have similar ease against the weak secondary. The Lions will fare pretty well as well against the Saints defense, but Brees can outscore anybody in the league.
Molly says:
Drew Brees is literally on fire right now, and I don't think the Lions have the tools to shut him down. The Saints only have their eyes on the Super Bowl right now.

Eli says:
My Redskins (Yes, the Washington Redskins, people) beat the Giants twice this season. The Falcons should have it in 'em.
Langston says:
While Matt Ryan's recent performance has been nothing to scoff at, I trust Eli Manning in the playoffs. New York takes this one.
Jacob says:
New York is undeserving of a home field first game, if not a playoff spot at all. Inconsistency has plagued the Giants all year, while the Falcons have only had two bad games all year. With a win here Atlanta will be headed to Green Bay and a likely defeat, but a wild card win is likely.
Molly says:
I assume the Giants are pumped after their win over the Dallas Cowboys, and will continue right through the Atlanta Falcons.

Eli says:
Upset alert! I've never been a fan of Roethlisberger or the Steelers, and to be brutally honest, I don't think they're that great of a football team. Big Ben's best attribute has always been his mobility, and he's a bit hobbled at the moment. Tebow does it again. Book it.
Langston says:
A couple injuries won't change the fact that the Steelers have the best defense in the NFL right now, and I'd be surprised to see Denver put up more than one touchdown on them. Tim Tebow's magical season comes to an unfortunate end.
Jacob says:
There is absolutely no condition under which I would pick the Broncos to win this game. Against the Chiefs' defense last week, Denver scored three points. Now they are playing the Steelers and there is no reason for me to believe that they will score at all. Without Mendenhall and Clark, the Steelers will win by a long shot.
Molly says:
I hate to say this, but I don't think Tebow magic is going to work here, no matter how badly I want Pittsburgh to lose.