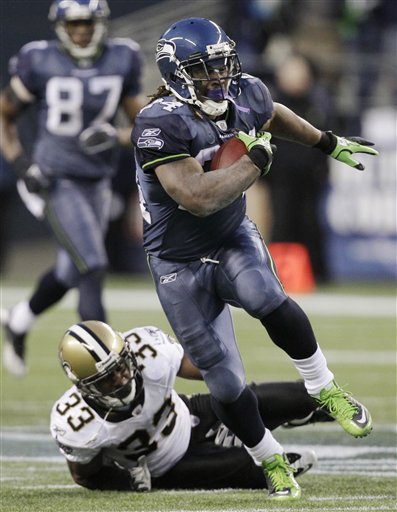 The playoffs are finally here. After a wild regular season, our SCO NFL experts turn their attention to the post-season, starting with the wild card round.

Yesterday, the Seahawks beat the Saints 41-36 in what some are calling the biggest upset it NFL history (although the '07 Giants might have something to say about that.) If you missed it, you'll want to check out Seattle running back Marshawn Lynch's crazy 67-yard game-winning touchdown run here. Saturday's second match-up went down to the wire, and the Jets came out on top. After Peyton Manning led his team down the field to set up a 50-yard go-ahead Adam Vinatieri field goal, the Jets came storming win the game 17-16 on a 32-yard Nick Folk kick.

Eli had a commanding lead at the end of the regular season, but his first two post-season picks went awry. Let's see if Blake and Melissa can claw their way back from now until Super Bowl Sunday.

New Orleans Saints (11-5) at Seattle Seahawks (7-9)
Blake- Saints
Eli- Saints
Melissa- Saints
Blake says:
This one's a no-brainer. Despite a few bumps in the road the past few weeks, the Saints have remained at the front of the pack all season while the Seahawks don't even deserve a play-off spot. Saints trounce the Seahawks.
Eli says:
The Saints fell to the Bucs last week, but there's no way the defending champs will fall to the 7-9 Seahawks.
Melissa says:
The Saints weren't able to clinch their playoff spot last week against Tampa Bay, which means the reigning champs will be looking for blood against a terrible Seattle team, who entered the playoffs with a losing record. It's slightly ridiculous, and the Seahawks really don't deserve to be here. Seattle will be crushed by the Saints at home.

New York Jets (11-5) at Indianapolis Colts (10-6)
Blake- Jets
Eli- Colts
Melissa- Colts
Blake says:
Whichever way this game goes it'll be extremely close. Just to be different I'm going with the Jets, who have had a fairly impressive season under the leadership of Mark Sanchez.
Eli says:
This is a tough one. The Colts have won four straight, while the Jets are fresh off a 38-7 thrashing of the Bills. You can't go wrong taking Manning come playoff time, so I'll take Indy to win a close one.
Melissa says:
The Jets got pretty lucky this year, winning a few games that they probably should have lost. They've definitely got some talent, and quarterback Mark Sanchez has led them to some great game winning drives this season. But the Colts have Peyton Manning and enough playoff experience to deal with the Jets this time around. As long as Manning keeps control of his team, scores early and gets help from their (struggling) defense, the Colts should be able to pull out a win. Plus, the Colts have kicker Adam Vinatieri, who always comes through in clutch situations.

Baltimore Ravens (12-4) at Kansas City Chiefs (10-6)
Blake- Ravens
Eli- Ravens
Melissa- Ravens
Blake says:
Like it's been said all season, the Ravens are a defensive powerhouse that is too much for any team, especially the Chiefs, to handle. This Baltimore team of veterans will run all over the Chiefs in Kansas City on Sunday.
Eli says:
The Raiders demolished Kansas City 31-10 in week 17—so much for any momentum heading into the post-season. The Ravens didn't play spectacularly either, but managed to come up with a 13-7 victory over Cincinnati. Look for Baltimore to find that offensive production they were missing last week, and come up with a big win over KC.
Melissa says:
The Chiefs have had flashes of greatness this year, especially from quarterback Matt Cassel. But they haven't been able to win when they need to and that worries me going into this game. If the Chiefs' running backs Jamaal Charles and Thomas Jones can get the ball downfield early on, they have a chance of beating the Ravens. But Baltimore's defense is dominant and should be a huge concern to Kansas City going into Sunday's games. Baltimore quarterback Joe Flacco hasn't performed extraordinarily this year—he's gotten the job done, but barely. Cassel's put his Chiefs on his back and basically got them to where they are. I'll go with Baltimore to come out on top, but the Chiefs are a dark horse this year, so you never really know what will happen next.

Green Bay Packers (10-6) at Philadelphia Eagles (10-6)
Blake- Eagles
Eli- Eagles
Melissa- Eagles
Blake says:
This one is hard. Both teams are sitting at 10-6 and will be intense going into playoffs. Ultimately, I think it's too hard to pick against Michael Vick. After sitting out last game, Vick will be back to his normal MVP status and will guide the Eagles more past the Packers.
Eli says:
After sitting out a game with a playoff berth locked up for his Eagles, Michael Vick returns to action against a stingy Green Bay defense. It's a tough match-up for Vick, but I'll take Philly regardless.
Melissa says:
As good as Green Bay has been this season, they've been marred by player injuries-- especially to major members of their defensive line. But many of them have come back, including linebacker Clay Matthews, who will present major issues from Eagles quarterback Michael Vick. Vick has been more than dynamic this season, throwing for 3,018 yards and 21 touchdowns. His story has also been more than inspirational, which makes him a leading candidate for this season's MVP. On the other side of the ball there's Packers quarterback Aaron Rodgers, whose statistics are similar to Vick's. Rodgers has thrown for 3,922 yards and 28 touchdowns. However, Vick's got weapons in receivers Jeremy Maclin and DeSean Jackson—something which Rodgers is lacking. This is the best game of the week, and the hardest prediction to make, but I'm going to take Philadelphia to surprise Green Bay. Philly's got home field advantage and hopefully it will actually give them the edge, resulting in an Eagles win.