League returns after lockout to try to reverse financial fortunes

This year is a rebuilding year—literally. The National Hockey League (NHL) is building piece by piece to form a profitable enterprise. Nearly a year ago, NHL commissioner Gary Bettman and the owners halted the 2004-2005 season before it began by locking the players out. The NHL was losing money under their current collective bargaining agreement, and the owners were paying too much money to the players to make a profit. Bettman locked the NHL's doors and for months the NHL Players' Association and the owners negotiated. Unfortunately, when the two sides finally reached an agreement, it was too late to save the season. But the NHL has returned and this year it will have to prove to their disenchanted fans that hockey is back and worth watching. Not much is certain regarding what this season will bring for the NHL, but it is shaping up to be another rebuilding year from a financial perspective. However, the NHL has taken steps to reclaim its fan base with new rule changes and what promises to be a faster-paced game.

The NHL has spent much of the last year completely retooling its financial structure. Some of the main issues that caused the lockout were resolved, but that does not necessarily ensure the NHL monetary success. In the 10 years following the last NHL strike (this one by the players) in 1994-1995, the NHL has lost roughly $1.5 billion, approximately $412,000 per day! This season, even under a new system, promises even more financial turmoil for a league already skating on thin ice.

The ice was never thinner than in the 2003-2004 season during which the NHL lost a total of $342 million by 19 of the league's 30 teams. Only ten of the NHL's teams were profitable and one broke even. The players' salaries ate up too much of league revenue. Simply put, the main reason for the latest lockout was that players' salaries were too high and the owners did not have the money to pay them. Before the lockout, players' salaries accounted for 76 percent of league revenue in comparison to 64 percent in the NFL, 63 percent in Major League Baseball (MLB), and 58 percent in the NBA. Franchises were not making enough money from ticket sales, concessions and advertising to cover their costs.

Under the new NHL Collective Bargaining Agreement (CBA), the payroll for any franchise may not exceed $39 million per year, and the maximum player salary cannot be more than $7.8 million. In contrast, Alex Rodriguez of the New York Yankees has a contract for $26 million per season and Peyton Manning of the Indianapolis Colts has a 7-year, $98 million contract that included a signing bonus of $34.5 million. A star in baseball, basketball or football would be offended by a $7.8 million contract. The NFL's Terrell Owens was dissatisfied with his $48 million deal. By limiting the players' salaries, and having a salary cap, the NHL owners' strategy is to minimize costs—player salaries—in order to maximize profit.

This system is dramatically different from its predecessor. The old business model for the NHL was designed in the mid 1990's and centered on increasing national TV rights and revenues. However, this model was a clear failure as demonstrated by the NHL's abysmal TV ratings. The TV ratings for the NHL were comparable to the XFL, a football league widely ridiculed for being more entertainment and glitz than football. During the 2005 NFL preseason, the NFL received a very respectable average TV rating of 3.4 million viewers. During the 2003-2004 season, before the lockout, the NHL averaged a rating of 1.5—in the playoffs! The NHL is taking steps to improve its TV ratings, most notably with a new TV deal.

The Outdoor Life Network (OLN) recently inked a TV deal with the NHL worth $135 million, an offer that neither NBC nor ESPN was willing to match. But for the NHL, this deal is too good to be true. OLN is a network struggling to enter the consciousness of America's sports fans, and showing something on their network other than fishing or hunting is a good place to start. Unfortunately only 64 million homes have OLN, compared to the 90 million that have ESPN, so the NHL is already drawing from a smaller pool of potential viewers. There are added incentives in the contract for the NHL, and the deal provides some financial security for the league.

One possible solution to the NHL's crisis is to downsize the league so that only the profitable teams remain. Problem is, only ten teams made money in the last NHL season, with three teams making less than $2 million. A ten team league makes for a repetitive schedule.

Besides the fact that the NHL stands to at least break even next season, the NHL has changed its rules, in some cases drastically, for the sole purpose of increasing the entertainment value of its product. Football, basketball and baseball have not changed drastically since their invention, with the exception of the three point arc and shot clock in basketball. The sports themselves have evolved overtime however, due to bigger, faster and stronger players. The NHL rule changes may appeal to the casual hockey fan, but it remains unclear if the rule changes will succeed in holding on to the die-hard hockey purists. 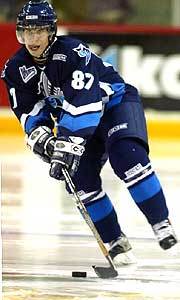 Photo: Sidney Crosby, the number one overall pick in the NHL draft, is the new face of NHL. Image courtesy of USA Today

Photo: Sidney Crosby, the number one overall pick in the NHL draft, is the new face of NHL. Image courtesy of USA Today

According to the NHL website, the league is entering "an era that will be marked by heightened competitive balance and exceptional entertainment." Before the rule changes, long passes were against the rules and short passes were the only way to move the puck up the ice, making for a more defensive, team-based game. Such a style of play is a very respectable form of hockey, but it was not drawing in viewers. The website details its changes in a section titled "Rule Changes to Enhance the Entertainment Experience." Among these new rules are an expanded offensive zone, the removal of the center red line to permit longer passes, reduced goaltender equipment size, and a shootout to decide games. These new rules may change the game of hockey forever and revolutionize new strategies and tactics, or they could dilute the quality of hockey and alienate some of hockey's most loyal fans.

Professional sports leagues have for years accentuated offensive performances to entertain viewers. Rarely has any league made so many rule changes at once to favor so blatantly an offense-oriented game, as the NHL has done. Longer, now legal, passes and a larger offensive zone mean that the game will be moving up and down the ice at an incredibly fast pace. The rule to reduce goalie equipment size is one that obviously invites more goals to be scored, and the NHL is hoping more goals means more viewers. A recent online poll conducted by NBC sports revealed that the new rules that enthused fans the most were those mandating a larger offensive zone and smaller goalie equipment. This poll means fans look forward to higher-scoring hockey. The NHL is hoping that with up-tempo, higher scoring games, fans will enjoy the newer, faster, NHL more than the slower, lower-scoring version.

Despite these rule changes that encourage offense and may eventually help grow the NHL, the NHL did make one questionable rule change: a shootout to decide tie games, even in the regular season. A breakaway in hockey may be the most exciting play in the sport, but that is due largely in part to the fact that breakaways are a rare occurrence. With breakaways deciding every tie game, inevitably, the breakaway will lose some of its luster. This rule change is very similar to the way in which Major League Soccer chose to end its tie games in its inaugural season. A giant five second clock was set up close to the goal and a player would dribble from half field and try to score on the goalie within five seconds. It seemed like an unfair way to decide a tie game, and in case the NHL has not noticed, the MLS got rid of this rule. I seriously question whether or not this rule change will help increase the NHL's popularity.

In an Associated Press article, Andrew Zimbalist, an economics professor at Smith College who specializes in economic trends in sports, commented that the NHL's actions may be too drastic and risk distancing the league from its loyal fans. "They're playing with fire, which isn't good for a sport that skates on ice," said Zimbalist.

Time is the only way to measure the success of the new NHL rules and financial policies. On October 5, the NHL will begin a new season filled with obstacles confronted in the past but never surmounted. The ice has been cleaned for close to a year and now it's time for the NHL to either fall through or skate over it.