Blazers honored for their achievements in STEM 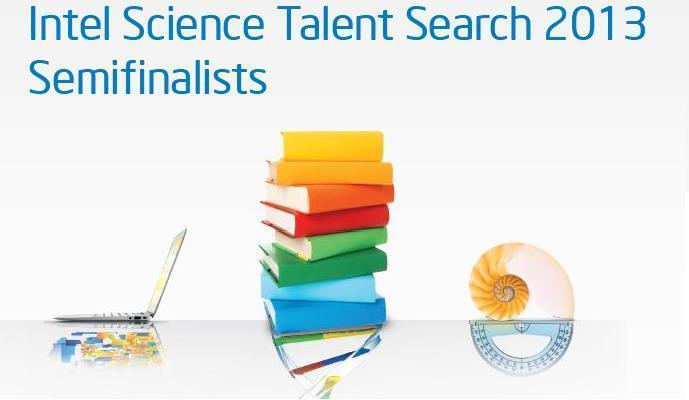 Photo: The Intel Science Talent Search competition has been held since 1942. Photo courtesy of Intel.

The Intel Science Talent Search is a nationwide science competition in which over 1800 students enter individual research projects. From that large talented pool of students, 300 semi-finalists were selected based on their application, test scores and essays from the applicants. Eventually, 40 finalists were selected based mostly on their science projects.Only 40 students in the country earned such a distinction and Montgomery Blair High School leads the nation with the most finalists.

The students' titles are as follows: Bourzutschky (New Analytical Solutions to the Time-Dependent Schrödinger Equation for the Quantum Two-Level System), Datta (Saturated Nuclear Matter in the Large Nc and Heavy Quark Limits of Quantum Chromodynamics), Davey (Early Cancer Diagnosis and Treatment Through the Detection of Circulating Tumor Cells Using Drop-based Microfluidics), Ganelin (Differences in Word Usage Patterns Between "Well-Recovered” Aphasic Patients and Control Subjects on a Picture Description Task), He (A Software Tool to Assist Genomic N-Glycosite Prediction in Cancer Cells), Johri (Elasticity of Q-beta Virus Capsids as Malaria Vaccine Carriers Validated via Peak-Force Atomic Force Microscopy), Shi (The Speeds of Families of Intersection Graphs), Shih (The Effects of Oncogenic KRAS and c-Myc on the Transcriptomic Output of the Cell: A Novel Role for a Master Oncogene) and Studt (Construction of the Higher Bruhat Orders on the Weyl Group of Type B).

The 40 finalists from around the nation will travel to Washington D.C. to meet each other before presenting their project to be judged once more. Senior, Neil Davey is enthusiastic about getting a chance to meet the rest of his fellow finalists, "Meeting the other thirty-nine students is very important because you can meet people with similar interests who also like science," Davey said. "We also might be seeing them in college, but to also continue doing research in the future in this subject."

The finalists get a bit of a break before they arrive in Washington D.C. on March 6 where they will all be introduced. The competition will continue until March 12.

A winner will then be chosen and that winner will receive a grand prize of 100,000 dollars. Although Blair's three finalists Shi, Datta and Davey may not win the grand prize, they have gained many opportunities for themselves already by making it this far in the competition. Being a finalist for the Intel Science Talent Search gives the students a chance to meet students from all across the country and to impress universities nationwide.

However, Davey the greatest gift given by this competition is the experience it gave him in terms of being a scientist. "[In this competition] I learned about the research process and how to write a paper and I essentially got a taste of what it is to be a scientist," Davey said.