The assembly was designed to help freshmen with the change from middle school to high school and to educate them about their bodies and legal rights, according to Mazine Lofton Blair's school nurse. "We'd like to help make an easier transition from adolescence to adulthood. This is your morning," she announced during the assembly.

Nia Williams, a nurse case manager with the African American Health Program gave a narrative depicting the risks of sexual activity at a young age. "I'm going to talk about what hormones are doing to your body and what pregnancy too early [in life] can do to your body," she said. Williams' narrative from the point of view of a fetus highlighted the obstacle pregnancy may present for the development of cells. "Cells are not mature so you are more at risk to infections. Your pelvis may not be fully developed…Young mothers may lose patience with a baby crying in the middle of the night," she said. Pregnancy, particularly, during teenage years, will affect the expectant mother "physically, mentally, emotional and financially," according to Williams. 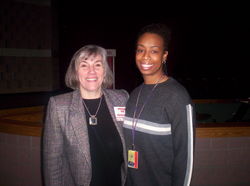 Sheryl Banks of Montgomery County Child Welfare Services educates communities on child abuse and negligence. She followed Williams with a legal look at sex and teens, as well as what puts people at risk for sexual abuse and assault. " The highest risk group for sexual abuse and assault is teenage girls," Banks said. According to Banks, many in this high-risk group are unaware of the legal repercussions of their actions. "If you are under the age of 16 and you choose to have sex with some one who is four or more years older than you, that person may be charged with 3 degrees of sex offenses, and that is called statutory rape," said Banks. When sexual abuse or assault does occur, however, "time after time, young women and girls say, 'Something I did brought this on,'" said Banks. "Anytime someone is sexually assaulted or abused, it is always the fault of the person who does the act." Banks gave many examples to show the risks of consensual sex as well. "When you have sex with someone, your future can turn on a dime." Her conclusion was a directive for the students. "Watch out for your friends and don't be keeping secrets. Secrets can do more harm than the actual act," Banks said.

Questions and comments were collected from the audience and those that were not answered at the assembly will be answered during an after school session, which has not yet been scheduled.

Administrator Linda Wolf closed the assembly with motivational statements that earned applause from the crowd. "You have the power over your own body. You are the one that commands the respect. If you respect yourself, others will respect you," said Wolf.

Danielle Foster. Danielle is a senior and all she can say is "it's about time". Now 17, driving, and close to completing the Communication Arts Program, she is ready to graduate on June second. This is her last year at Blair though, and she plans to make … More »