"Nixon" at his finest

Morgan and an outstanding cast spin straw into gold

Here's a premise: a comedic British television personality with absolutely no political experience attempts to squeeze confessions out of a disgraced American president in four unprecedented interview sessions. It sounds dull and tedious, more at home in a history class than a movie theater. Yet screenwriter Peter Morgan manages to spin this thin material into "Frost/Nixon," an entertaining and enjoyable work of art.

The president in question is Richard M. Nixon (Frank Langella) living a life of exile in California following the Watergate scandal. He's narrowly dodged both trial and impeachment for some of the greatest abuses of power in American history: the American people are righteously outraged. The talk-show host is David Frost (Michael Sheen) who's recently has had his American show canceled and fears that success in the United States is lost forever. By forcing Nixon to face his mistakes in front of eager television audiences, Frost hopes to resurrect his old success. Nixon, who views Frost as an incompetent challenger, hopes to use the interviews and their subsequent publicity to rebuild his political career.

At the backbone of every good film is a strong screenplay and "Frost/Nixon" is a prime example. Morgan's script, based around his previous Tony-award nominated stage play of the same name, thoroughly fleshes out each of the characters. Morgan's lines reveal Frost's vanity, arrogance and eventual desperation, as well as smaller character traits such as Nixon's racism, greed and continued dishonesty. The mind-games that Morgan's characters play before each interview session increase drama and heighten tension. When the story moves away from the duel-like interviews, Morgan lightens the mood with a number of politically charged one-liners.

The script is in turn extraordinarily executed by Langella and Sheen, who reprise their roles from the play's original Broadway run. Their characters are walking contradictions. Sheen's Frost maintains an exterior of confident flamboyance even as Nixon crushes him in interview session after interview session. As soon as his hotel room door closes, the flashy suits and calm demeanor are replaced by disheveled collars, loosened ties and angry frustration.

Despite the quality of his performance, Sheen is thoroughly outclassed by Langella's Nixon, who is also a lesson in duality. Calculative and self-serving on the outside, yet internally ravaged by guilt and self-loathing, Langella's take on post-Watergate Nixon ranges from beautifully delivered nostalgic ramblings to crazed anger at life itself. Everything about Langella's performance - from his gravelly voice and bent posture to his loud verbal attacks during the final interview session - exudes Nixon in a way never before achieved onscreen. 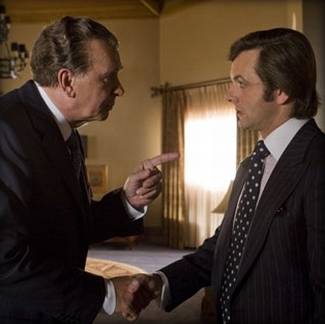 Photo: "Frost/Nixon" chronicles a series of interviews between the journalist and former president. Picture courtesy of Universal.

Photo: "Frost/Nixon" chronicles a series of interviews between the journalist and former president. Picture courtesy of Universal.

Director Ron Howard supplies the necessary historical background through a short introduction of chopped-together news footage that is simple to follow and easy to absorb. By re-filming many of Nixon's pre-Watergate television appearances with Langella as Nixon, the film transitions very well from history to drama. However, for the remainder of the film, Howard takes too much of a hands-on approach. Standard but informative camera angles would have been enough to allow Sheen, Langella and Morgan to work their magic. Howard instead attempts to inject his own meaning into the film. To embody the chaos of planning and execute the interviews for example, Howard ditches steady-cam, resulting in dizzying pictures. Howard also overuses close-up shots, bringing the cameras uncomfortably close to faces and bodies. When projected onto theater-size screens, these effects combine to become a nauseating distraction from the film's acting.

Still, these flaws behind the camera aren't enough to completely undermine "Frost/Nixon." Powerfully-written and exceptionally-performed, the film manages to transcend its source material, resulting in a potent political drama definitely worth catching.

"Frost/Nixon" (162 minutes) is rated R for some language. Now playing in theaters everywhere.