On Friday, National Basketball Association (NBA) Commissioner David Stern announced that the league, once again, failed to reach an agreement with the National Basketball Players Association (NBPA) on a new collective bargaining agreement (CBA) and that another two weeks of the upcoming season would be cancelled. The announcement came after significant progress was made during Wednesday's negotiations. Many were optimistic of a deal being reached before the weekend. 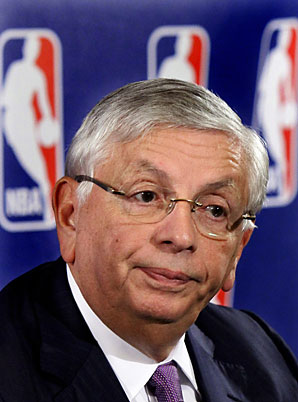 Photo: David Stern announced Friday that he would cancel all NBA games in November.

Photo: David Stern announced Friday that he would cancel all NBA games in November.

This cancellation, in addition to a previous two-week cancellation announced on October 9, means that no NBA games will be played before December, a full month after the scheduled beginning of the season. Even if the season is not delayed any further, it is unlikely that fans will be able to see a full 82-game season. Though the two sides have legitimate financial issues to debate, they should have resolved them in the offseason, when they didn't have so much to lose.

Last April, the NBA announced that its 2010-2011 regular season games televised on its three national TV partners (ABC, TNT and ESPN) drew the highest ratings of NBA games over the course of a season in history. TNT basketball viewers increased 42 percent last year, ABC's went up 38 percent and ESPN's improved by 28 percent.

This was a result of one of the most exciting NBA seasons in a long time - ever since LeBron's "Decision" last July, there has been a louder buzz around the league that can't be drowned out. Stories such as the early brilliance of Blake Griffin and John Wall, the revitalization of the New York Knicks, the retirement of Shaquille O'Neal, the dominance of Derrick Rose (who at 22 became the youngest NBA MVP ever) and the incredible first round upset of the San Antonio Spurs by the eighth-seeded Grizzlies team of cast-offs, brought much more attention to the league.

But rather than ride this wave of excitement into this fall, the owners and players would rather squabble over whether to split hundreds of millions of dollars in basketball-related-income 50-50 or 52.5-47.5.

After the NBA's last lockout, in 1998, the league saw ticket prices fall and it was unable to recover for the next three years. Television ratings also dropped for three years in a row. Players lost tens of millions of dollars; teams lost hundreds of millions. And it didn't just cost millionaires some cash; for some fans, it cost them their love of professional basketball. In an October 1998 poll, 29 percent of fans said that their views of pro basketball had become more negative.

The NBA has had a work stoppage after the expiration of two of its last three six-year CBAs (the league and players managed to come to an agreement in the June before the 2005-06 season). Given that the negative effects lockouts linger for multiple years, the NBA would not be wise to cancel a significant number of games every twelfth season.

And they would not be wise to let negotiations linger this fall. Coming off one of the most exciting basketball seasons in memory, it would not be prudent to alienate so many new fans. Fans who buy tickets, fans who watch commercials, fans who wear the latest 'Melos, fans who are ready to buy the new red-white-and-blue Wizards jerseys.

Fans who are now beginning to count down the days until March Madness.