"Limitless" tries its best but fails to revolutionize thought

Will one tiny pill make the difference in an otherwise normal life? This is the question director Neil Burger supposedly answers in his movie "Limitless." The combination of jarring cinematography and expert suspense buildup are sufficient enough to incite interest in the audience; however, the rest of the film does not cross any boundaries or otherwise set itself apart from "Inception" aspirants.

"Limitless" begins in media res, meaning the film begins with scenes from the end of the story. Burger's decision to start the film at the end of the story was a brilliant one, simply because it added a twist to a plot that otherwise would be slightly predictable. Burger's addition of twists and turns throughout the movie, such as the shocking epilogue, also helps develop the rather tired plot.

Jo Willems, the cinematographer for "Limitless," deserves the ultimate praise for being the film's driving force. Through multiple fish-eye and zoom shots, Willems essentially puts the viewer in Eddie's shoes, allowing the audience to see the world through NZT for themselves. Scenes in the film are also presented using fast and slow motion to show Eddie's dependence of NZT progressing through the film. The usage of the shots add to Eddie's new life by developing the newfound clarity that he found after experimenting with the NZT for the first time. 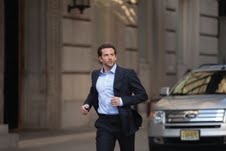 Photo: Eddie (Cooper) runs from trouble as he attempts to keep his life from unraveling due to the NZT.

Photo: Eddie (Cooper) runs from trouble as he attempts to keep his life from unraveling due to the NZT.

Cinematography is such a huge part of "Limitless" because, even with an all-star cast, the acting is quite lackluster throughout most of the film. Cooper, most famous for his role in "The Hangover," seems to be lost without his sidekicks for much of this film, save the scenes in which the NZT is in full effect and Eddie is at his most confident. Even De Niro, one of the better actors from the last few decades, seemed to act in a mediocre role. The audience was not intimidated by Van Loon's threats, and Eddie did not seem to be either, even when he wasn't on drugs. In fact many of the smaller actors in the film, such as the leader of the Russian mafia who Eddie gets entangled with, provide the shining performances of "Limitless."

Suspense and mystery, a necessity in an action-thriller flick, are built through a strong soundtrack put together by Paul Leonard-Morgan. Leonard-Morgan seems to have chosen the right set of music for every scene; the instrumentals playing while Eddie is being chased down by thugs not only excite the audience but make them feel as if they are a bystander in an actual situation. The musical choices through the film help the viewer relate to Eddie's emotions in each essential scene.

Overall, "Limitless" is a typical action flick, with a few sudden twists and turns that help the movie stand out from other action films out this week. The plot is predictable throughout most of the film, although the ending will most likely surprise every member of the audience. Ultimately, Burger is able to string together enough emotion and connection with the viewer to keep them adequately guessing until the film finally ends.