Panic! At the Disco gets teen hearts beating faster with enthralling performance

"Swear to shake it up, if you swear to listen!" Panic! At the Disco's lead vocalist Brendon Urie belted through the microphone during the opening song of their performance titled "The Only Difference between Martyrdom and Suicide Is Press Coverage," as he challenged the crowd to get pumped. The crowd did just that, and as promised, the band did indeed "shake it up" all night long.

Panic! At the Disco delivered whole-heartedly at their Nov. 11 performance at the Patriot Center in Fairfax, Virginia, with a grasping performance exploding with elements of a Vaudeville circus show. The night kicked off with two opening acts, which were originally scheduled to be Bloc Party and Jack's Mannequin but there was a last minute change and the relatively unknown Black Gold replaced Bloc Party on the schedule. Though Black Gold attempted to give a strong performance, the crowd was just much more interested in the other bands playing that night. The band managed to garner a few encouraging applauds, but it was clear who the audience really wanted to see.

Jack's Mannequin came on next and was a huge hit among the audience. They performed their hit ballads "Dark Blue" and "The Mixed Tape," and lead singer/songwriter Andrew McMahon whipped out a harmonica for "La La Lie," before which he gave a short speech about the importance of friendship and wished for everyone to have "a great time with their friends tonight." Sounds cheesy, but it seemed to make the crowd feel all warm and fuzzy inside, a feeling that was only maximized by the single's poignant lyrics: "I've got friends who/(La La Lie)/Will help me pull through/(La La Lie)," as everyone began to sway in time to the song and use cell phones as replacement lighters.

Jack's Mannequin did such a great job of warming up the crowd that, by the time the lights dimmed in preparation for the beginning of Panic's performance, the energy of the crowd was through the roof. Panic! At the Disco chose the perfect song to begin with, which provided a flawless transition into the rest of the performance with the lyric "I'm the narrator and this is just the prologue." 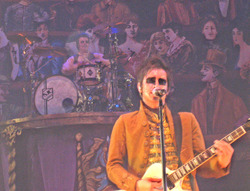 Photo: The stage's background was a replication of a 30's era circus audience to enhance the theme of Vaudville circus extravaganza. Urie belts out "Time to Dance" as drummer Spencer Smith backs him up.

Photo: The stage's background was a replication of a 30's era circus audience to enhance the theme of Vaudville circus extravaganza. Urie belts out "Time to Dance" as drummer Spencer Smith backs him up. Photo courtesy of Julia Mazerov.

Panic! covered every song on their album "A Fever You Can't Sweat Out," which is divided into two halves. The first focuses on a more futuristic sound with pop/dance vibes and uses synthesizers and drum machines for songs like "Time to Dance." The other is more old-school, with traces of a Vaudevillian piano and an accordion for hits such as "But it's Better When We Do" and "There's a Good Reason These Tables Are Numbered Honey, You Just Haven't Thought of It Yet."

The performance itself was also divided into two halves, which were separated by a quite unusual intermission. Smith, Urie, guitarist Ryan Ross and bassist Jon Walker engaged in a lengthy collaboration that was accompanied by a silent film composed of odd scenes in fast forward (think Charlie Chaplin) featuring people running in and out of doors and crushing inanimate objects. This unusual piece led to a boisterous drum line performance including the entire band and all six dancers, which the audience loved.

Had the four members of Panic! At the Disco merely gotten on stage with a reasonable amount of energy, their instruments and a little bit of make-up, they still would have been able to fully engage the crowd with their catchy lyrics and funky, futuristic sound. Yet they extended far beyond the bare minimum, with an elaborate set resembling a circus tent and a painted backdrop of a circus audience. On stage with the band was their own crew of six bizarre circus characters, including a man on stilts and four scantily clad women with crazy hair and make-up.

Throughout the performance Urie took turns engaging in crazy antics with the circus actors for some songs but playing piano for others. During these piano breaks, the audience was able to enjoy the lyrics while the circus performers performed wacky skits and unusual acrobatics in the background. There was even some sexual tension during the show when vocalist Urie and guitarist Ryan Ross almost kissed, spurring an eruption of cheers from the energetic crowd at each occurrence.

Particularly strong performances of the night included "Lying is the Most Fun a Girl Can Have without Taking Her Clothes Off," during which the band stayed true to its word by "[getting] these teen hearts beating faster, faster." Another favorite of the audience was the band's first hit single "I Write Sins, Not Tragedies," which details a scandalous wedding, which was depicted by the dancers decked out in wedding dresses in tuxedos. The night ended with "Build God, Then We'll Talk," which was a questionable closing but delivered with such vibrant energy that the negative lyrics of the song didn't even put a damper on the overall performance.

Essentially, fans of Panic! At the Disco got way more than they bargained for. For a mere $35, attendees got to hear all of their favorite songs on the album and watch a circus performance and an opening act as equally strong as the main event. The band revealed both their dark and morbid side as well their fun and upbeat side, leaving an air of mystery as to their true musical identities. But after all, intrigue is what keeps fans running back for more.