On Sunday, 23-year-old pitching phenom Stephen Strasburg made his second start for the Nats since tearing his ulnar collateral ligament back in 2010. This summer, Strasburg underwent Tommy John Surgery and missed over a year of playing time in the major leagues. In Sunday's game, Strasburg gave up one run in the first inning and then cruised through the second and third innings before being taken out of the game by Nationals manager Davey Johnson. The Nationals went on to win the game.

In both of his starts this year, Strasburg performed well but was taken out before reaching sixty pitches, a very short leash for a starter. It could even be argued that his early departure cost the Nationals a win in his season debut. The team was leading at 3-0 when he was pulled off the mound, but wound up losing the game 7-3. 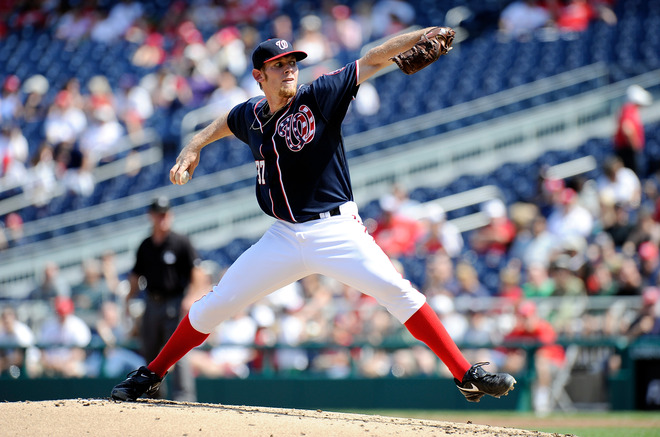 Photo: The Washington Nationals do not need to risk another injury to Stephen Strasburg this fall

Photo: The Washington Nationals do not need to risk another injury to Stephen Strasburg this fall

Nobody in the Nationals' short history in the nation's capital has excited the fans and given as much hope for the team as Strasburg. One of his old teammates, Nyjer Morgan, simply referred to him as "Jesus." In the games that Strasburg started in during 2010, the Nationals averaged 15,564 more fans than games he didn't play in, an incredible 72 percent attendance increase. There is no doubt that he is, right now, the team's most valuable player.

However, the Nationals are already virtually eliminated from the playoffs. The games at the end of this year are pointless compared to next year's when, for the first time since their inaugural season in 2005, the Nats have a legitimate chance of reaching the playoffs. It may seem as if the Nats' management is being overly cautious in their handling of Number 37, but a prudent approach is far better than pushing Strasburg's recovery and risking another injury. His health should not be risked in an essentially meaningless September.

This is not to say that Strasburg is not yet ready to pitch in the major leagues – he's already a reliable starter and has all the talent necessary to become a dominant force in the National League. In his first Major League Baseball game in over a year, he managed to confuse Most Valuable Player contender Matt Kemp at the plate.

Furthermore, baseball is filled with players who have returned from Tommy John surgery, and there's no evidence to suggest that Strasburg hasn't recovered as well as Francisco Liriano or C.J. Wilson have. During his rehab, he's become much stronger and has learned how to pitch more efficiently, which will allow him to stay in games longer, and become an even more valuable asset to the team.

But at this point in the season, winning is unimportant and all Strasburg can really do for now is help the Nats sell tickets. The Nats don't need an ace, and Strasburg doesn't need to win them any more games. No matter their record from here on out, we won't be seeing Washington in the playoffs this fall. But next fall, who knows?