No Thumbs Up for "White House Down"

"White House Down" is another action-packed blockbuster revolving around the White House.

After directing the movies "Independence Day" and "2012," director Roland Emmerich is back with his newest action packed movie. For action lovers, "White House Down" guarantees entertainment and summer fun regardless of the movie's numerous flaws. Following "Olympus has Fallen," it is the second movie of the year that centers on a takeover of the White House.

Though the movie was interesting, Director Emmerich made the mistake of attempting to make the movie a drama and the acting lacked the depth to support that attempt. Tatum's acting fell short in the attempted heartwarming scenes between him and his daughter. In addition, Maggie Gyllenhaal's, who plays a Secret Service agent named Finnerty, feeble attempt at showing the emotional distress of her character was cheesy and disappointing. Furthermore, throughout the movie, the blame for the attack was constantly changing. Most of these plot twists made the premise of the movie unrealistic and at times almost laughable. 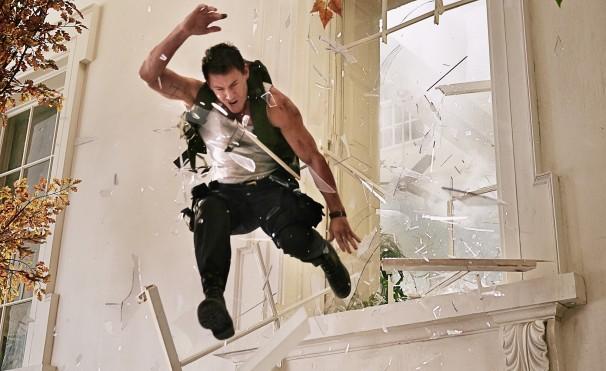 Photo: John Cale (Channing Tatum) breaks in to rescue his daughter from a terrorist group.

Photo: John Cale (Channing Tatum) breaks in to rescue his daughter from a terrorist group.

Despite the unsatisfactory acting by some of the other cast members, the chemistry between Foxx and Tatum holds the movie together. The numerous exchanges of witty one- liners between the two, gives a light- hearted tone to the thriller. President Sawyer's parallels to President Obama and Speaker to the House Eli Raphelson's (Richard Jenkins) parallels to Speaker Boehner added even more amusement to the film. The humorous moments made the film a lot more enjoyable to watch and differentiates this movie from the other White House-centered action film, "Olympus has Fallen."

Despite "White House Down" being such a huge blockbuster film, some of the visual effects are a bit lacking. For example, a few of the helicopter scenes looked fake and animated. However, the many massive explosions made up for those few inadequate shots. Mostly the action, like the fight scenes, seemed well choreographed and looked quite realistic.

Emmerich's weak effort at making this movie a drama, in addition to the absurd plot makes "White House Down" a movie to watch for mindless summer fun. If you like overdone explosions and non-stop action, the movie will provide entertainment and keep you on your toes.

"White House Down" is rated PG-13 for prolonged sequences of action and violence including intense gunfire and explosions, some language and a brief sexual image. Now playing at theaters everywhere. Released June 28.