No varsity, no problem

Crushing disappointment came as the final seconds of the 22nd annual Changuris Cup championship ran down on Feb. 14. After losing 1-0 for three championship games in a row, floor hockey team "A Tribe Called Best" stepped off the gym floor in frustration, with some members in tears. 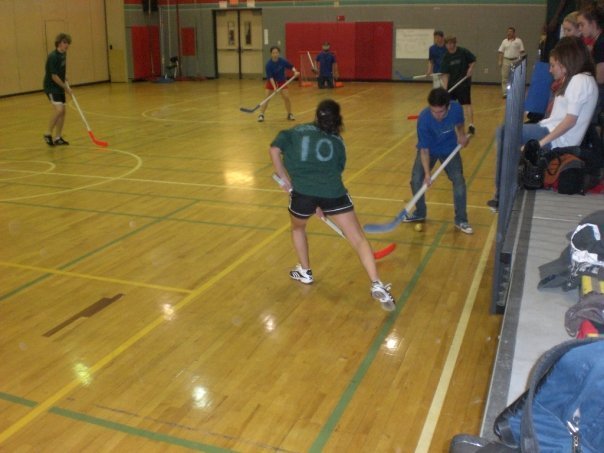 Photo: A Tribe Called Best and the New York Jets play in the Changuris Cup championship this past winter. Photo courtesy of Julia Mazerov

Photo: A Tribe Called Best and the New York Jets play in the Changuris Cup championship this past winter. Photo courtesy of Julia Mazerov

But this squad is not part of a traditional inter-school sports team; it is one of five teams that participated in the intramural floor hockey league, organized by social studies teacher Robert Gibb and English teacher Michael Horne. And while it may seem easy to disregard in-school sports as trivial, the competitive drive and serious dedication that some athletes display in intramural floor hockey and the Blair Sports Academy's soccer and basketball leagues put these programs into a league of their own.

For the love of the game

For some students, a strong interest in the game drives their competitive nature on intramural sports teams. Senior Sergio Quisquinay has been playing soccer since he was five and still practices everyday to hone his skills. He plays on the Blair varsity soccer team; he plays for the Bethesda Mavericks of the Colonial League; but he has also played competitively in the Blair Sports Academy (BSA) soccer league since his freshman year.

The BSA is an in-school program that, among hosting other activities, organizes a basketball league during the fall and a soccer league - which will begin Monday – during the spring each year, according to physical education teacher Emanuel Charles, supervisor of the BSA basketball and soccer leagues. To add to the competitive atmosphere, many Blazers often see soccer and basketball games going on in the gym and enter to cheer and watch, Charles said.

For Quisquinay the league is both a training ground for Blair varsity soccer and a place to have fun. "It's good practice. There are a lot of random teams who just play for fun but also several teams who are very skilled," Quisquinay says.

Similarly not all players come to intramural floor hockey with experience, creating a league that varies in skill level from athletes new to the sport to experienced, four-year floor hockey players and members of the Blair community ice hockey team. Sophomore Elana Gold and a group of friends came into the league this year with little previous experience. "At first my friends did it kind of as a joke," Gold says. 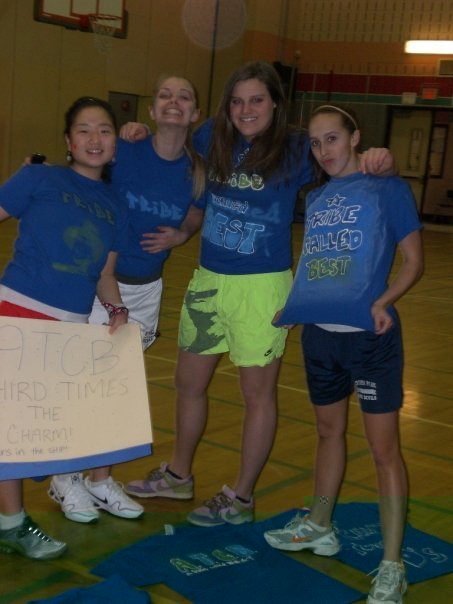 On the other end of the spectrum are seniors Katie Scott and Sumih Chi, who have been co-captains of a floor hockey team comprised of close friends every year since they were freshmen. In ninth grade, their squad the "Nachitos" came in at an embarrassing last place out of six teams. Undiscouraged, their team made a comeback just a year later as the "Joyriders," battling their way all the way up to second place. In 11th grade, emerging as the "Iron Chefs," Scott and Chi's team clinched second place once again, falling 1-0 in the championship match. This year, their team "A Tribe Called Best" returned for the last time hoping to finally win the Changuris Cup.

For Scott and Chi, floor hockey can be more than just a fun pastime. "It can be chill and we'll goof around since we know everyone who plays in the league," Scott says. "But that doesn't mean we don't take it seriously. We get very competitive."

In preparation for the championship game this year, "A Tribe Called Best" began outside practice two months before their season started in October, battling it out at Takoma Park Middle School, the Blair tennis courts or just on the streets, according to Scott. "We spent hours afterschool practicing with each other," Scott says. "We just took our hockey stuff, found a flat area and started it up."

In addition to their out-of-school practice, "A Tribe Called Best" also designed their own homemade team shirts for the championship. According to Chi, the team made stencils and used spray paint and puff paint to create their own designs. "We decided in previous years that we liked being the team that didn't need a uniform and came in with our own style," Chi says. "But, this year for the championship game, we decided that because it is our senior year and our last game, it was time to be unified."

Despite their preparation, the squad's ultimate goal of taking home the Changuris Cup was unfulfilled when they suffered defeat at the hands of the "New York Jets," comprised of a few of the Blair ice hockey team's star players this year. "It was certainly disappointing; a let-down," Chi says. "I'd say we were dominating most of the game but we couldn't hold on in the end."

Last spring, Quisquinay's team also battled their way to second place out of 16 teams only to be inched out of first in the final game of the BSA soccer league. But the journey to the finals was not a smooth one. 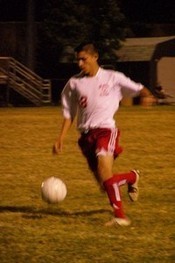 In the semifinal match, senior Jimmy Diaz became entangled in a raged brawl. "We were playing a team of seniors and one of them was playing very rough," Diaz says. "He kept following me and when he hit me on the back of the head, I punched him back by reflex and a fight broke out." Diaz was suspended from the league for the rest of the season, although he appealed his case, eventually landing him back on the team in time for the final game.

Despite the fierce competition, the BSA is still primarily a place for students to have fun with friends through recreational play. "It's a great place for students to interact with each other and have fun," Charles says. "There are a few teams really in it to win it, but actually a majority is just there to play some ball or hang out."

Sophomore Cooper Neimand, a member of the junior varsity basketball team and the BSA basketball league, agrees. His team made it to the final game before losing to a team of seniors. "The competition is certainly there but, like most teams, we play mostly just for fun," Neimand says.

Likewise, the intramural floor hockey league remains a gathering for students to enjoy themselves. "There are a lot of teams who have no chance of winning but still went out and had fun every time," Gibb says.

Although Gold's team, the "Terminators," only won a few games, Gold enjoyed her experience in the league. "We met a lot of people we didn't expect there. We're definitely going to try again next year," she says.