Northwest eliminates Blair from the playoffs

Jaguars take down inexperienced Blazers in first round of postseason play

On a blisteringly cold Friday night in Germantown, the Blazers (8-3) took the field for the last time this season, some for the last time ever, with hopes to upset the mighty Northwest Jaguars (10-1) on the road in the first round of the playoffs. Things didn't end up as Blair hoped however, as the game ended with a 38-3 loss but the Blazers were still able to realize how far they had come this season.

As the opening kickoff lofted in the air the crowd wasn't focused on anything but the game. Not even the chilling 28 degree weather could distract from the excitement of Blair's first ever playoff game. Northwest completely dominated the first half and hit the ground running with running back E.J. Lee racking up 50 yards on their first drive. He also ended the drive with a two-yard touchdown, one of three in the game, to give the Jaguars the early 7-0 lead.

On the Blazers' first possession they went a quick three-and-out. On fourth down their punt attempt was blocked and the ball bounced into the end zone to give the Jaguars a safety and make it a 9-0 Northwest lead. Just a couple minutes later the Jaguars scored again as they returned a kickoff to Blair's 20-yard line and later ran it in from the four-yard line to extend their lead to 15-0. 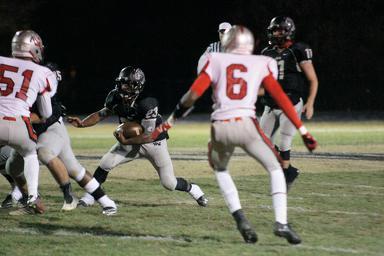 Photo: Seniors Nick Dayhoff and Gudeta Deme are in position to make a tackle

Photo: Seniors Nick Dayhoff and Gudeta Deme are in position to make a tackle

"We had a very difficult time stopping them in the first half," Coach Fields said. "They are a much more physical team with more playoff experience than us so once you get down 14 or 21 points to a team like that it's hard to come back."

The Blazers game plan was to stick to the running game that had worked all year and rely on their strong defense to keep the game close. However, the game plan had to be aborted as things didn't go the way they had hoped.
"Once you fall in a deep hole like that you can't just keep running the ball. Even if it's worked all season." said Fields.

Blair had little success running or passing. Their only points came when running back Yonis Blanco led a drive downfield to the Northwest 17-yard line where they settled for a field goal. 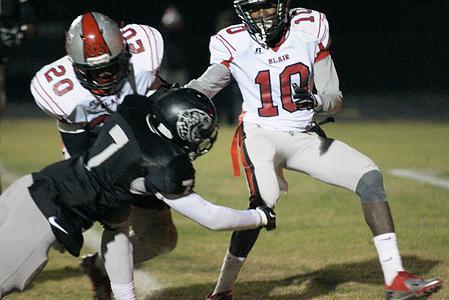 Northwest continued to dominate on both sides of the football as they shut down the Blazers offense and scored on their next three possessions to give them a 38-3 lead at the end of the half. The score would remain the same for the rest of the game as Northwest subbed in all second string players as the clock slowly wound down on Blair's historic season.

After the game Fields and the players reflected on their record breaking run and what got them to this point.
"I will always remember this season and this team," Blanco said. "I'll never forget my family. We all had a lot of fun this year and I'm really going to miss it. I'm just grateful for the opportunity to play with these guys and for Blair."

"The season was a blast man. Out here with my brothers playing the greatest game on earth," Linebacker Aaron Clingman said. "I'm mad it had to end this way but all good things have to come to an end. We made history and that's something nobody can take away from us."

"Our student athletes have been nothing less than remarkable. They've always done what was asked of them and from our starting quarterback to our kicker they've all improved immensely," said Fields. "I'm just sad it had to end this way but I told the guys at the end of the game that we were one of only 16 teams in the entire state to make the playoffs and that's something to be proud of. We just happened to be one the teams that lost."

A blowout certainly wasn't the way Blair wanted to end their record breaking season, but nevertheless the Blazers made history this year and laid the foundation for a new era of Blair football.