A giant monster materializes out of nowhere to terrorize the Manhattan population. Hasn't this movie been released before? It sounds so awfully familiar - think it was called "Godzilla." That's probably the initial impression viewers get as they read the plot summary, dismissing "Cloverfield" as a horror flick remake with all the fake gore and clichéd guy-in-monster-suits needed to land an all-time low in the box office. But director Matt Reeves takes several steps to distinguish "Cloverfield" from the rest of its monster flick genre.

The critical factor is undoubtedly the surrealism, marked by a unique point of view – a handheld camcorder attached to one of the characters. Taking video testimonials at a goodbye party for Rob Hawkins (Michael Stahl-David), Hud Platt (T. J. Miller) acts as cameraman and documents the terrific events that effectively break up the celebration. The notorious shaky-camera that plagues unprofessional YouTube clips becomes the film's desired effect. At times when Platt runs for his life or falls down, all the audience can see is a blur of images – a frightfully authentic simulation of the chaotic situation. Though some viewers may leave the theater with headaches and nausea from the unsteady screen, this necessary evil significantly enhances the plot's credibility as well as the effect of confusion in the movie. 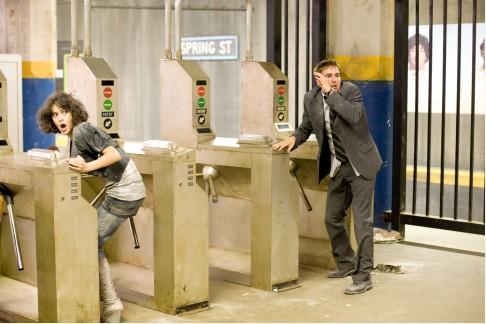 Another powerful component of Reeves' genius is that the plot centers on a group of six escaping individuals, rather than the battling military, as it does in traditional monster films. Each person's story adds to the multi-dimensional command of the plot. During the party, people from the group are arguing or in straits with each other, but when their lives are in peril, they form a new bond. Regretting his fight with her an hour earlier, Rob tirelessly searches for his wounded ex-girlfriend, Beth McIntyre (Odette Yustman), who is trapped in her apartment. Marlena Diamond (Lizzy Caplan), initially frustrated by Platt's constant, pathetic advances, ends up saving his life. The acting for these characters, though nothing extraordinary, instills a certainty in the audience that this could happen in real life – if only we disregard the monster part.

Surrounding the monster, though, is a fog of ambiguity and senselessness. There is no reason for its presence, unlike the hydrogen bomb that incited Godzilla. In addition, for most of the movie, the actual image of the monster is left unclear. Like stumbling around in a dark room full of sharp objects, the characters do not know from what exactly they are fleeing. This lack of understanding of their predicament not only amplifies their panic, but also keeps the audience in suspense over such an unrestrained plot. The group of protagonists are left to ponder over an intangible, yet very real, imminent danger.

But, "Cloverfield" is not perfect. As its zenith mostly concerns its sound plot, the complementary pitfalls all involve implausible scenes, to which even the best scriptwriters will fall prey. It is hard to imagine, for example, why any sane person would continue filming when a skyscraper-sized monster is yards away.

But these small liberties aside, "Cloverfield" tells a full story, leaving the viewer satisfied with the depth and complexities of characters and plot, while eliciting a disturbing aura of surrealism due to the grainy, reddish tone superimposed throughout the movie, and the abruptness of each action scene. There is not a single note of music, which might seem amateur at first but heightens the senses. Particularly, in a drawn-out scene where the group takes temporary refuge in a subway station, the only audible noise is the thumping of the monster up above and the occasional flickering of florescent lights – with no other distracting sounds, terror, is all you can hear.

Cloverfield is rated PG-13 for violence, terror and disturbing images.