On Jan. 27, Peace Studies teacher Joanne Malone positioned herself in the midst of a crowd of approximately 500,000 anti-war demonstrators, on the side street of the National Mall where she promised her first and third period peace studies students could find her. But for the students in Malone's Peace Studies classes, attending the protest was more than a show of expression; it was a homework assignment.

Malone has taught Peace Studies since 2000, when she first came to Blair, but this year is the first time that Malone has made it a class requirement for students to attend a workshop, demonstration or other event outside of class that pertains to the nonviolent and peaceful goals of the class. "Getting involved is a different, more active and effective way of taking a stand against violence," she says. After attending a workshop or an event, Malone says, the students are expected to informally tell the class about their experience and write follow-up journal entries, reflecting on how they plan to use or not use what they learned in their everyday lives. 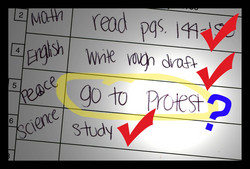 There's no protesting this homework

Malone says protests and demonstrations are among several options for students. "I can't force people to go to demonstrations, that wouldn't be right," she says. "I can, however, require them to get involved in something outside of class which pertains to the course." Aside from war protests, students in Peace Studies classes have attended other events such as American Friends Service Committee Training in Nonviolent Techniques and Creative Peacemaking, a workshop at American University. Malone encourages her students to look for unique opportunities and workshops to get involved in the nonviolent movement and share their ideas with the class.

Malone decided to make acts of peace a requirement because of her faith in the nonviolent activism and community she sees in the school. "If I was teaching at another school, I may not have done this, but I know there is a strong opposition to war at Blair," she says.

Power of the people

Though she did not require that all of her students attend the Jan. 27 rally, Malone expressed the benefits of attending such a large-scale protest to those who were interested. "Just to observe the phenomenon of half a million people united under the same purpose shows the power that the people have in a democracy and empowers you to take a stand," she says.

For Peace Studies students Claire Lieberman and Daniel Keller, both of whom attended the rally, the nonviolent display was an empowering opportunity. "I got the sense of community of people united against the war, which is not often represented," says Lieberman. "Seeing this made me feel justified in my opposition to the war."

Keller fully supports Malone's requirement for students to take part in a nonviolent activity. "It is important for kids to have the hands on experience of taking a stand for something they believe in or getting involved outside the classroom," he says.

Social Studies Department Chair, George Vlasits, fully supports the concept of requiring students to attend a nonviolent activity outside of Peace Studies class. "It is an excellent way to make what is taught in Peace Studies real and concrete, and experience first hand the things that you cannot gain from lectures and textbooks," he says.

To Malone, Peace Studies serves to enlighten students about different views of nonviolence in society, and getting involved whether it is through a protest, workshop or another nonviolent cause is the best way to see the peace movement in society. "To read about it is one thing, but to experience the power of the people united, that is the nonviolent movement taken to the next level," she says.