Not so big or bad

"Red Riding Hood" only has aesthetically pleasing scenery and people.

Catherine Hardwicke's "Red Riding Hood" is – and there's only one word for it – confused. Any potential the movie had was squandered on a lurching, awkward script. The acting, though not stellar to begin with, suffers even more as a result. The film's only redeeming points are gorgeous scenery and some bursts of talent. With the same hopeless director, this movie is just "Twilight" in faux-medieval times and with a slightly better main character.

The scenery in the movie is nothing short of breath-taking, all snow-capped mountains and ominous forests (with spiky trees, no less.) The movie is peppered with bird's-eye views of mountains on the edge the village of Daggerhorn. Why? I'm not entirely sure, but it looks great. The actual village is very interesting, with inexplicably odd-looking houses that nonetheless serve as a pretty good background for the story.

The human scenery is excellent as well. Seyfried, Fernandez and Irons are all appropriately gorgeous. Valerie is more emotionless than edgy, Irons comes off as a lackwit and Fernandez's brooding is unconvincing. Unfortunately, the only chemistry from Seyfried and Fernandez comes when they're kissing, not when they're talking. 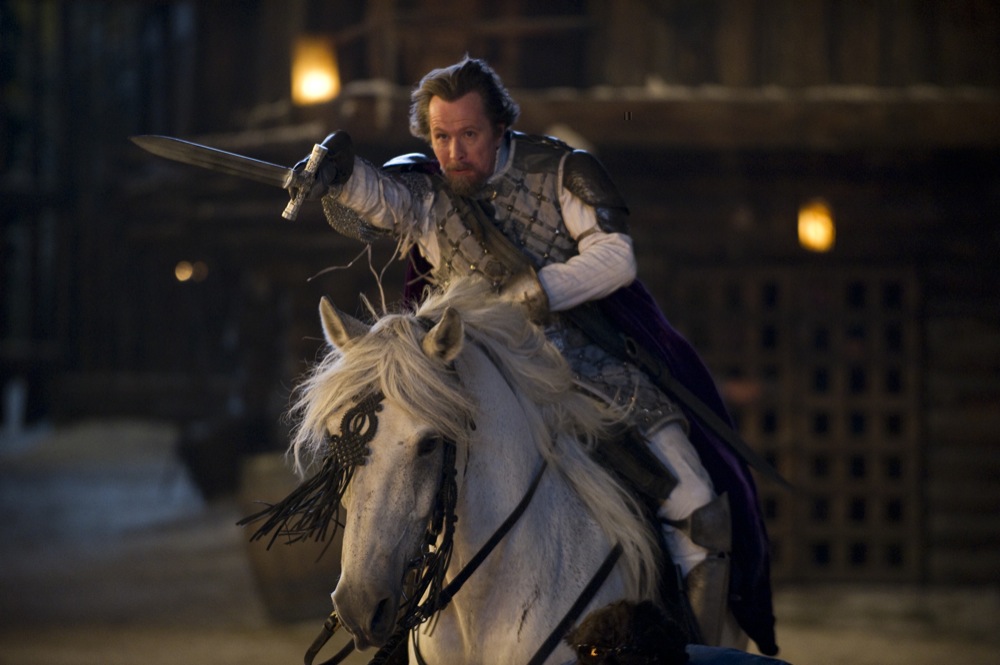 Photo: Gary Oldman is one of the few talented actors in the film.

Photo: Gary Oldman is one of the few talented actors in the film.

A breath of fresh air comes from Oldman, who injects a much more convincing sense of fear into the story. However, his performance is more or less the only standout.

Really, though, this could be the fault of the script. The writing is wooden enough to make you feel sorry for the actors, however lackluster they may be. It throws red herrings around with all the sensitivity of an axe to the back. The plot, loaded with enough back-story to make a soap opera proud, is about as ludicrous as Seyfried's short sleeves while there's snow on the ground. The movie is based off a book, and one has to hope that the paper version is better written – it would be hard for it not to be.

As for the actual treatment of the story, "Red Riding Hood" is remarkably faithful, perhaps overly so. Allusions to the tale are thrown about left and right, from the cloak itself to the infamous grandmother scene, to the painfully obvious metaphors about sexual awakening. Hardwicke's "modernizations" mostly involve throwing in family drama and the omnipresent love interests, and are far from captivating.

Another glaring problem with the movie is the wolf itself, which stands out amongst the other breath-taking visuals. It looks like it just came out of the washing machine, which makes all of the wolf's appearances funnier than they are scary.

In summary, if "Twilight" had a cousin with a thing for fairy tales, it would be "Red Riding Hood." The less-than-stellar acting, the attractive young leads, the love triangles and supernatural elements are all there. More than anything, this movie teaches you that what's on the inside really does count more, and all the "oohs" and "ahhs" of "Red Riding Hood" can't make up for the lack of substance.

"Red Riding Hood" is rated PG-13 for violence and creature terror, and some sensuality. Now playing in theaters everywhere.