Nothing short of magical

"Harry Potter and the Deathly Hallows: Part 1" is a film that expertly mixes the funny, the frightening, the poignant and the sad. With a supremely talented group of actors carrying forward J.K. Rowling's amazing story, the latest installment to the Harry Potter franchise is unforgettable.

The film follows Harry (Daniel Radcliffe) – accompanied by his best friends, Ron (Rupert Grint) and Hermione (Emma Watson) – as he embarks on his journey to destroy Horcruxes, magical objects imbued with the soul of Harry's enemy, Lord Voldemort (Ralph Fiennes).

The acting in the film is incredible. The three main actors were amazing, and the supporting cast added just the right touch of idiosyncrasy. Most notably the deliciously evil Bellatrix Lestrange (Helena Bonham Carter) and quirky Luna Lovegood (Evanna Lynch) provided well-appreciated moments of light in an otherwise dark film.

Director David Yates is quite fond of the close up. With a lesser cast, this could have yielded some awkward results. Nonetheless, these talented actors' facial expressions were some of the highlights of the movie, with the exception of one scene where it becomes obvious Ginny (Bonnie Wright) and Harry have a significant lack of chemistry.

Special praise is due to actors David O'Hara, Sophie Thompson and Steffan Rhodri, who all played Ministry of Magic employees that the three protagonists impersonate while trying to track down a Horcrux. O'Hara, Thompson and Rhodri delivered a convincing performance as Harry, Hermione and Ron awkwardly transformed into adult wizards.

Still, a great cast of actors is not enough to make a good film, but Yates' directing was thankfully solid. The two factors played off each other; good directing let the acting shine, and the cast made some of Yates' close-up camera shots more natural. To capture the right feel of the movie, Yates let the emotions that characters have dictate his directing. He often alternated between wide shots and close-ups, and the lighting and costumes appropriately change from gloomy and ragged to bright and formal.

Some of Yates' choices, however, were less effective and less true to the book. His portrayal of the three protagonists was skewed, because the relationship between Harry and Hermione was more touching than that of Watson and Radcliffe. Perhaps this is because of the innate Hollywood desire to have "The It Boy" and "The It Girl" together, but it will certainly offend Harry Potter fans. Indeed, there is an excruciatingly awkward dancing scene between Harry and Hermione. In another instance, when the Horcruxes try to break Ron's spirit by showing him Harry and Hermione together, the trio's dynamic simply felt wrong. 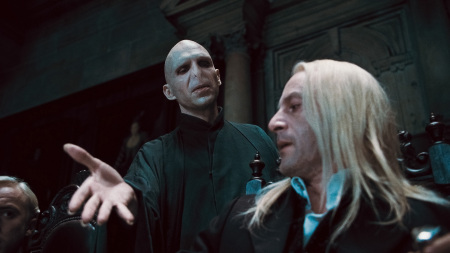 Photo: Voldemort (Fiennes) menaces even his followers, such as Lucius Malfoy (Jason Isaacs).

Photo: Voldemort (Fiennes) menaces even his followers, such as Lucius Malfoy (Jason Isaacs).

Script-wise, this is by far the most faithful interpretation of the book, a fact that sticklers will hail as key to the movie's success.

The one drawback to this latest installment is that the plot may not make sense to those who have not read the series. Yates focused on character and relationship development, a move that any Harry Potter fan will approve of, but as a result there were parts in the story that the casual viewer might not understand.

"Harry Potter and the Deathly Hallows: Part 1" has all the qualities of a great film. It is visually breathtaking, provides just enough comic relief to temper the grim moments – thank you, Ron and Luna – and keeps audiences riveted from the first moment until the last. This reviewer's greatest regret about the film is that its companion doesn't come out until July 2011. It will certainly have much to live up to.

Harry Potter and the Deathly Hallows: Part 1 is rated PG-13 for some sequences of intense action violence and frightening images. The movie runs for 146 minutes and is now playing in area theaters