Nothing to judge here, folks

People have always been fascinated by celebrity weddings and this year was no exception: the royal wedding held the public's interest for months and the Kardashian wedding was featured endlessly on TV and in magazines. But one wedding drew a different kind of attention. 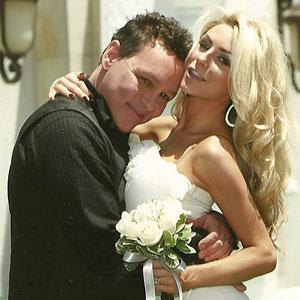 Photo: The couple on their magical day (they really do swear she's 16).

Photo: The couple on their magical day (they really do swear she's 16).

When 51-year-old actor Doug Hutchison (who is best known from "The Green Mile" and "Lost") married 16-year-old Courtney Stodden (yes, she really is 16), it not only attracted attention from various media outlets but also shocked parents everywhere. People couldn't understand how it could be legal for a 16-year-old to marry someone three times her age (which it is, with parental consent) and how they could really be in love, especially since they met on the internet.

Many saw it as a publicity stunt that was sure to draw attention, not only because of their age difference but also because Stodden is, to put it nicely, less than innocent looking. Some even compare the relationship back to Jerry Lee Lewis who married his 13-year-old cousin (but let's be honest here, no one can really top that one).

Even though the wedding was months ago, the public is still upset over their union and the big question is why? Why does anyone feel that it's their business to argue the honesty or legality of their marriage? Sure they may be a strangely fascinating couple, but the details of their relationship are nobody's business but their own. If someone thinks their age difference is too great, it doesn't matter since they've already sealed the deal. If someone thinks it's a publicity stunt, they're only fueling the fire by actually paying attention to it. Many people defend gay marriage because they believe that it's not anyone else's business who someone chooses to marry. The same principles should be applied to every type of marriage.

Many Americans feel that it is their duty to be as nosy as possible when it comes to celebrities, especially when it comes to marriage. People want to know every detail; what the bride wore to the wedding, which other celebrities attended the reception, when are the newlyweds having kids? But it seems like overkill to spend so much time worrying about the motives or legitimacy of Hutchison and Stodden's marriage. This certainly isn't the first time a celebrity's marriage (albeit a D-list one) has been criticized and bashed, and it won't be the last.

However weirded out you may be by this, shall we say lively couple, it's not anyone's place to criticize the couple's marriage or motives. Besides, there are much more important things to focus on in this world… like Kim Kardashian's divorce.