Marseille's historic landmark reopens to public; exterior work to be completed in the coming year

The project, which cost 12.8 million Euros or about 17.4 million dollars, was to be funded solely by the city's inhabitants, but city officials later decided to fund the development while also accepting contributions from the locals. More than one million Euros are still needed to completely meet the cost of the refurbishment. Marseille officials have now called on its citizens to support the restoration financially, through advertisements in magazines and posters.

Photo: The entirety of the basilica's sanctuary underwent an extensive and expensive restoration.

Photo: The entirety of the basilica's sanctuary underwent an extensive and expensive restoration.

Inside the main sanctuary many parts were redone, including a multitude of mosaics made from gold and tiles from Venice that had fallen, cracked, or discoloured, as well as dozens of suspended miniature boat models. The marble, onyx and granite that adorn the arches and walls of the basilica underwent similar repairs.

Each year, Notre-Dame attracts approximately 1.5 million people from all corners of the globe, including the United States, China, England and Guadeloupe. With the refurbished sanctuary, the basilica's Vice-Chancellor, father Raoul Sara, anticipated attracting many new visitors. "It's an absolutely extraordinary site. It's so ancient. Hopefully, this will inspire more visitors [from] the entire world to come see this beautiful site," said Sara.

Rémy Ninci, a life-long resident of Marseille, fondly remembered the old interior of the basilica, but welcomed the new improvements. "It was very well renovated, with all the new mosaics and ceilings. The old Notre-Dame was beautiful, but now she is even more beautiful," he said. "There are many traditions that go along with the basilica. People come to make wishes, such as success on an exam or a cure to an illness…even the professional soccer team of Marseille, l'Olympique de Marseille, comes the night before an important match to pray." 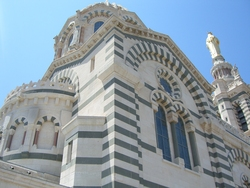 A long-time attendee of the basilica, and its current treasurer, Lucien Sentenac, similarly appreciates the restoration and maintains that the spirit inside the church has not changed. "The ambiance here is very special. It's a time to be enjoyed, but it's hard to explain. Those who don't feel comfortable will leave…but I've never seen anyone leave."

Designed in the Romanesque-Byzantine style, Notre-Dame de la Garde is perched atop a 485- foot tall hill that overlooks the entire city of Marseille, the oldest city of France. From its golden statue, visitors were once allowed to get close to a bird's eye view of Marseille's beaches, ports, mountains and city. On top of its 110.89-foot tower stands a 31.82-foot gold statue, created by the artist Laguesne and added to the basilica in June of 1931.

The French architect Jacques Henri Esperandieu constructed and consecrated the basilica in 1864. However, a chapel first occupied the hill in 1214, and was later replaced in 1477 by a new church, the beginnings of the current Notre-Dame de la Garde.

Although the interior construction has concluded and the sanctuary is now open to the public, the crypt and the exterior remain unfinished and will likely be completed in the coming year; a restoration in which the majority of an exterior wall that bears bullet holes from World War II will be repaired.