On July 6, Maryland’s daily number of new cases spiked at 540 new cases, an increase of 190 compared to July 1. In the U.S., there has been an increase in new COVID-19 cases since the Fourth of July weekend in at least 40 states. This year, most families celebrated at home instead of following typical Fourth of July tradition.

Despite the nationwide trend of rising pandemic cases, Montgomery County’s daily new case numbers have remained steady at an average of 45 new cases per day since the start of July.

Leading up to Fourth of July celebrations, officials across the nation warned against crowded events like watching fireworks or going to the beach. In her news conference on June 25, D.C. Mayor Muriel Bowser asked D.C. residents to stay home during celebrations on Independence Day. “Our strong recommendation is that D.C. residents celebrate the Fourth of July at home or near their home in small gatherings,” Bowser announced.

Despite warnings from officials to stay home and avoid crowded public spaces, many Americans continued celebrating as usual, leading to the rise in national case numbers. While some beaches closed their gates, many remained open to crowd sizes that appeared no different from previous non-pandemic years.

Blazer Lydia Chan celebrated this Fourth of July at the beach in South Carolina, and noticed that it appeared to look the same as usual years, with high turnout and large crowds in spite of public safety recommendations. ﻿ 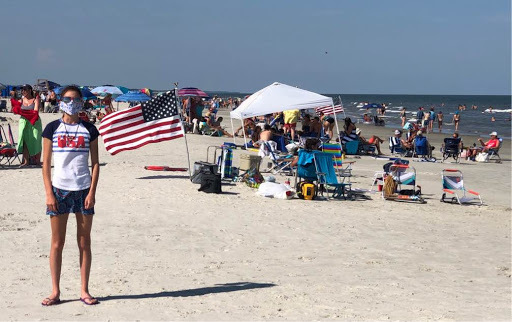 Chan wore a mask and adhered to social distancing regulations, but noticed that many of the other beachgoers did not. The lack of preventative measures taken worried her. “If I don’t get the coronavirus I’d be lucky,” Chan said.

South Carolina was one of the states that saw an increase in COVID-19 cases after the Fourth of July weekend. In comparison, Maryland has been on a steady decline in new COVID-19 cases since June. Regulations issued by state officials have helped keep case numbers in check within the state.

This year, Blazers who usually celebrated the Fourth of July with fireworks turned to other forms of celebration. With older siblings coming home from college due to COVID-19 shutdowns, many Blazers celebrated with family gatherings and at-home events.

Blazer sophomore Katya Shepherd Johnson spent the weekend playing tennis and celebrating at home with her family. “We just played tennis and made burgers and hot dogs on the back porch, no party or celebration stuff or anything,” Shepherd Johnson said. Many other Blazers did the same: staying home with at most a big family dinner.

Stoddard also said in his announcement that Montgomery County residents were prohibited from using fireworks privately, in order to prevent accidents or neighborhood gatherings that might lead to increases in COVID-19 cases.

At the moment, these private gatherings have not affected Montgomery County case numbers drastically. While most of the U.S. celebrated with public fireworks and events over the Fourth of July weekend, most Montgomery County citizens and Blazers followed protocol and celebrated at home, keeping COVID-19 under control.

Katalina Li. Hi there! I'm Katalina and I'm a sophomore. When I'm not writing articles, I'm usually binge-watching Gordon Ramsay shows, thinking about what to eat next, or working on homework while listening to music :) More »