Obsessing over obesity won't tip the scales in our favor

The numbers on teens' scales are gaining more weight on the minds of Americans - and for good reason. Across the nation, more teens are becoming obese, and Maryland is no exception. In 1976-1980, five percent of Maryland teens were obese, and in 2003-2004, that percent was up to 17, according to data from the National Health and Nutrition Examination Survey. 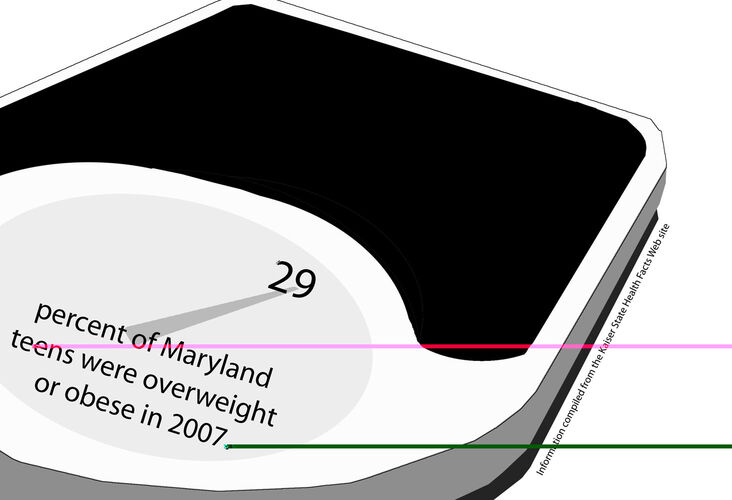 Photo:
A study recently revealed that American teens are exercising the same amount as those in the 1990s but still weighing more. Nevertheless, no matter what the correlation is between obesity and physical activity, obesity is a serious problem. Advertisements for unhealthy food appeal to children, entertainment comes in the form of computers instead of exercise and families rely on cars to get around. The fight against obesity is too narrow, with only a few programs here and there. We must focus on the broader issue - significantly changing the aspects of American society that feed obesity, starting with local action.

Before we can get into the underlying problems, we need to understand what obesity is. Weight classification is based on body mass index (BMI), a general measure of body fat proportion based on weight and height. According to the Centers for Disease Control and Prevention (CDC) Web site, adult obesity is defined as having a BMI of 30 or higher (for example, an adult at five feet and nine inches is considered obese if he or she weighs over 203 pounds), while children are categorized as obese if they are at or above the 95th percentile for their age and sex on CDC growth charts.

The Maryland Behavioral Risk Factor Surveillance System does not collect teen obesity data, but last year's data on adult obesity showed that Montgomery County had the state's lowest adult obesity rate at 16.7 percent. It's true that Montgomery County has one of the lowest rates each year, but its rates are still increasing right along with the rates of other counties and across the nation.

While not an easy solution, fundamentally changing ingrained aspects of society is the only way to reverse the trend and overcome the multiple health issues that are deeply rooted in the American way of life. "There's so many different barriers that are placed in front of us," said Carolyn Voorhees, who studies obesity as an associate professor in the Department of Public and Community Health at the University of Maryland.

Montgomery County and all of America need a complete overhaul - no amount of liposuctions or faddish diet plans can fix our nation's obesity epidemic. For a remedy, Voorhees suggested "re-engineering activity back into our lives." One crucial aspect is changing neighborhood design. America was designed around the car, making it difficult for teenagers to get around communities in an efficient and safe manner that also burns calories. There are thousands of miles of streets in Montgomery County without sidewalks, and the public transportation system of buses and subways is not always safe enough. If we can fix all of the barriers to walking and biking to destinations or public transportation locations, then we can discourage sitting in the car and encourage healthy exercise that helps combat obesity.

A simple, local way to incorporate exercise into teen transportation is to get more students to walk to school. In November, a Virginia district supervisor proposed that Fairfax County Public Schools cut down its number of buses and increase the number of walkers. While budget cuts may have motivated the change, it was still a small step toward healthier lifestyles.

The obstacle in Montgomery County is that parents already complain about the respective 1.5-mile radius and two-mile radius in which middle and high school students must obtain their own transportation, according to the MCPS Department of Transportation. In the minds of parents, school buses are safe, but roads without sidewalks and public buses are not. With improved efficiency and safety of the transportation system and, hopefully as a result, changed minds of parents who value their children's health over personal convenience, MCPS can reduce the number of school buses and get teens to work their legs in addition to their minds. Maryland and Montgomery County need to make the community safer and more walker- and biker-friendly. Parents have to support initiatives like decreasing school buses and encourage their kids to walk or bike instead of riding in the car.

In terms of what's in students' stomachs, MCPS is on the right track. The Physicians Committee for Responsible Medicine (PCRM) grades lunch programs of MCPS and other schools districts across the nation on their obesity, chronic disease prevention, nutrition and healthy eating initiatives. Since its low "C" in 2004, MCPS has improved and received 98 percent in 2008, according to PCRM reports. The PCRM commended MCPS's variety of healthy foods and encouragement of students to make healthy choices but suggested eliminating processed meats from school menus. No matter how high the grade, though, it is still up to students to opt for baby carrots over fries.

Local change is unfortunately incremental, but it's a necessary start. There has to be a cohesive effort among individuals, families and all of society to push for overall health through a culture of physical activity and nutritional diets. It may take decades to overcome the obesity epidemic, but only massive changes can accomplish it. When we use multi-faceted approaches involving everyone to improve overall public health, low-fat teens come along as a side dish.