Oh MAN, what a night

Though the lights had dimmed, the murmuring of the crowd remained. After a few moments, a lone violin could be heard coming from the shadows of the auditorium, its sweet sound undulating in a gentle melody. Junior Ann Choi played her way to center stage, serenading the audience to silence. As the final note echoed through the awed auditorium, the precedent for the night was set. 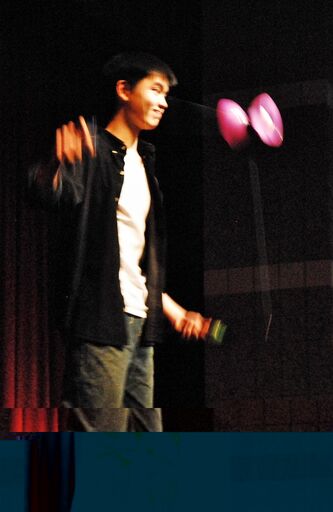 Photo: Sophomore Enoch Hsiao does tricks with his light-up diabolo.

Photo: Sophomore Enoch Hsiao does tricks with his light-up diabolo.

Despite being rescheduled several times due to weather, the 21st annual Magnet Arts Night on Thursday was a remarkable showcase of diverse talents. Aside from occasional audio problems, the show, emceed by the dynamic group of Nader Behdin, Scott Yu, Guodong Fu and Mythili Mandadi, succeeded with its generally smooth flow and wide spectrum of acts.

Act I began with Enoch Hsiao masterfully manipulating a light-up diabolo to mystifying techno music. In a darkened auditorium he captivated the audience with complex tricks to create a spectacular one-man light show.

As per MAN tradition, there were many classical music performances, but each stood out with its own artistic flair. Andrew Zhang demonstrated mastery of Liszt as his fingers flew across the piano in his performance of Transcendental Etude #12 in B flat minor, while Seyoun Kim and Jenna Yi's piano-clarinet performance of "Oblivion" seemed to illustrate a story with its smoothly changing tones. Yi also returned with Monica Ly to entertain the audience with a comical battle-style duet of Liszt's Hungarian Rhapsody #2.

There were also several cultural acts that enriched the show with their diverse music and visually-striking elements. Deepa Chellappa, Tripti Soni, Vibha Rao, Ruhi Vasavada, Aashvi Vasavada, Millie Shah and Janvi Raichura danced in elegant synchrony to a medley of lively Indian numbers, their vibrant apparel casting a spectrum of color upon the stage. 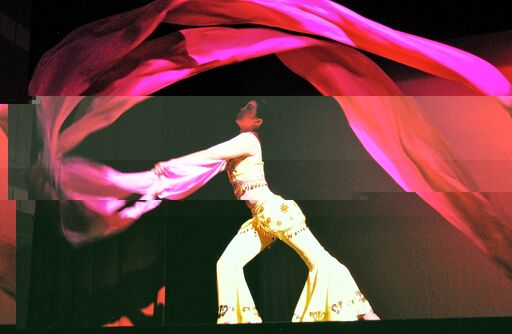 This energy was complemented by a more serene Chinese ribbon dance by Amy Liu who twirled around the stage in a manner that mimicked flower petals floating in the breeze. The tranquility of this performance was then juxtaposed with a fiery Latina dance by Laura Sirbu and Cristian Panameno, who graced the stage with their sharp moves and attitude.

Intermission provided time for attendees to marvel at a vast array of art pieces, created by Magnet students, that were displayed in the lobby. Additional musical performances during this period – "Fidelity" performed by Savannah Cheo, Alex Huntress-Reeve, Emili Malatesta and Monica Ly, and Passacaglia performed by Lori Kaufman and Nathan Kung – helped to create a pleasant atmosphere. 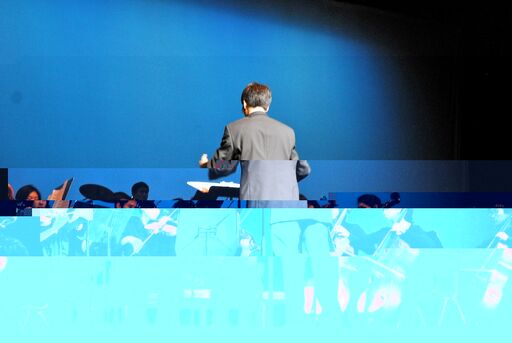 The steady skill of the night did not waver in Act II. It began with a compelling medley of Hans Zimmer, arranged by Elissa Shiau and Pin-Joe Ko and performed by a small orchestral group of students. Ko led the group through magnificent renditions of themes from several celebrated films. Other instrumental performances included Peggy Houng, who played the harp with nimble precision and Scott Zimmermann, who played "Hungarian Fantasy" on the guitar calmly but passionately.

More dance acts continued the energy throughout the night. Hannah Guan, Lena Jia, Amy Liang, Amy Liu and Cindy Zheng performed a group routine to the song "Explosive" that can only be described with the same term, while Richard Chen performed a more relaxed solo dance to Ne-Yo's "Because of You" with smooth and fluid moves.

Comedic sketches also delighted the audience; "Your Name, Sir?" performed by Ozzie Fallick and Joseph Owen provided for classic slapstick silliness. "My Baby Loves a Bunch of Authors" combined song with a goofy acting-out of the song. 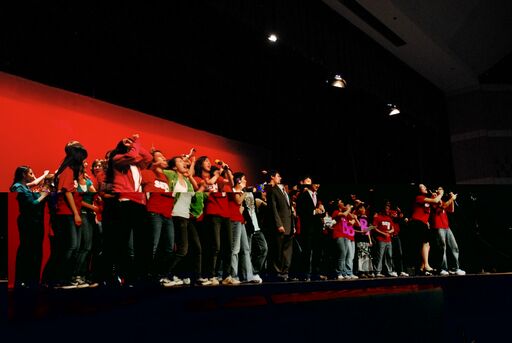 Photo: The Magnet senior class closes the show with a song called "The Magnet Never Ends."

Photo: The Magnet senior class closes the show with a song called "The Magnet Never Ends."

The night wrapped up with the highly-anticipated traditional senior act. It began with a Magnet-themed plot of the film "Up", where young students struggled to fight off the ghouls of procrastination and the wrath of B-letter grades that obstructed their pathway to college. The conclusion of the story led into an upbeat Bowling for Soup parody, "Magnet Never Ends" which the Magnet class of 2010 blasted with pride.

The lyrics, though reminiscing upon the Magnet experience as a whole, also summarized the night; though the show had come to an end, the traditions and talent of the Magnet program would be timeless.

Because of You by Ne-Yo
Richard Chen