At the 2010 Academy of Country Music Awards (ACMs) on Sunday, country fans saw many familiar stars, greeted new faces and said goodbye to one of the most beloved duos in country music history. On the moving stages of the MGM Grand Hotel in Las Vegas, queen of country Reba McEntire hosted the show for the ninth time. McEntire was armed with corny jokes and a wide array of glittery dresses. 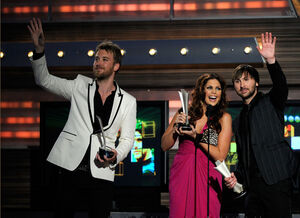 Photo: Young artist Lady Antebellum picked up the ACM awards for Top Vocal Group of the Year, Song of the Year and Single Record of the Year on Sunday.

Photo: Young artist Lady Antebellum picked up the ACM awards for Top Vocal Group of the Year, Song of the Year and Single Record of the Year on Sunday.

In fact, only the cowboy hat-shaped trophies that the academy gave away sparkled as brightly as McEntire did. While tradition held strong on Sunday night and old hands like Brad Paisley and Carrie Underwood took home Top Male Vocalist and Entertainer of the Year (Underwood became the only woman to win Entertainer of the Year twice in a row), respectively, various new acts and a few under-the-radar singers took home their fair share of awards. Performance-wise, the boys stole the show.

While the males dominated the stage all night, two males and one female reigned supreme on the podium. Lady Antebellum took home their first ever ACM trophy for Song of the Year, to win twice more that night for Single Record of the Year and Top Vocal Group. Even more impressive is that the group beat serious country heavyweights like Rascal Flatts and Taylor Swift.

Miranda Lambert was another winner who was green to award show recognition before Sunday. Lambert had previously won only two country music awards - both ACMs - in her entire career. But this year the Texas native picked up and a trophy for Video of the Year and the coveted Top Female Vocalist - an award she took away from Underwood, the three-time consecutive winner. Lambert's unusually introspective album "Revolution," released fall of 2009, also earned the singer Album of the Year, giving her the distinction of being the only solo artist to win Album of the Year twice.

Although it was nice to see relative newcomers take home some of the most coveted awards of the night, one group left in the dust was the Zac Brown Band. The group proved their worth with their Grammy award for Best New Artist, as well as with their Grammy performance, during which they wowed the crowd with an incredible mastery instruments and harmonies. The group was also the only country music band in history to have four consecutive number one singles off of a debut album, and certainly deserved an award Sunday night. 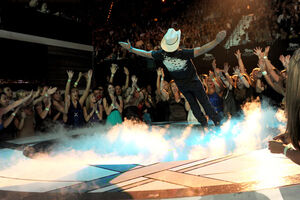 Photo: Brad Paisley falls into a pool after performing his new single "Water." Paisley also nabbed the trophy for Top Male Vocalist of the Year for the fourth time in a row.

Photo: Brad Paisley falls into a pool after performing his new single "Water." Paisley also nabbed the trophy for Top Male Vocalist of the Year for the fourth time in a row.

Many country contemporaries took to the stage. Both Underwood and Lambert gave touching, if forgettable, performances. Swift yet again tore off her dress to reveal a separate outfit during her gig, throughout which she danced wildly and randomly sang with a gospel. Broadway crossover Laura Bell Bundy ("Legally Blonde," "Wicked") also performed her country music debut with what seemed to simply be a Broadway number - complete with backup dancers, chaps and banjos in the background.

Luckily, the boys' well-delivered performances picked up the girls' slack. From Brad Paisley landing in a pool at the end of his song "Water," to Jack Ingram and Dierks Bentley inviting unexpecting fans onto the platform with them, the cowboy Casanovas were the heart and soul of the live show.

Of course, legendary country duo Brooks and Dunn were the special performers of the night-– the group took the ACM stage for the last time on Sunday with their hit "My Maria." The artists ended their career with a lighthearted and fun performance that had their peers and fans singing and dancing along.

It was sad to say goodbye to Brooks and Dunn, yet this year's ACM awards shed light on a whole new crop of talented country artists. The faces we've grown accustomed to over the years will always be present in country music, (will McEntire ever stop hosting this show?) and Sunday night was a testament to the genre's bright future.