On the sports field, student-athletes undergo a coaching role reversal

Blazers foster sportsmanship and teamwork through involvement in youth sports

The sun shines down on the field's freshly cut grass as two teams in different-colored uniforms line up in their formations. The players put on their game faces and dig their cleats into the ground. But as the opening whistle sounds and the first pass is made, both teams rush to the ball in what appears more like a battle than a soccer game. The only mediating force against the chaos of youth sports: junior Connor Dowd and his shiny whistle, signaling his position as referee.

Like other teenagers in the area, Dowd has discovered involvement in youth sports to be both a lucrative employment opportunity and a chance to help children enjoy athletics. Dowd referees about two games a week in the D.C. Stoddert Recreational Soccer League, earning $25 a game. Coaching, teaching and refereeing positions for teenagers exist in area youth athletic organizations, as well.

A position of responsibility

One of the many goals of recreational athletics is to foster teamwork and enjoyment that makes exercise pleasurable. Therefore, Dowd tries to make the game as fun as possible without it becoming unsafe. "I'm there facilitating them doing something they like to do," he says. "I try to keep the play flowing, because the kids aren't out there for me to call lots of little fouls."

Though the players can get caught up in the energy, fun must occur simultaneously with education, especially in recreational leagues, where athletes often only have a basic knowledge of the sport, according to Todd Korth, associate editor for the National Association for Sports Officials and Referee Magazine. He believes that there is a teaching component to refereeing, as well as coaching. "While officials are not asked to coach, they can instruct players and coaches on the rules of the game," he says.

Junior Thiagu Sezhian, a referee in the Takoma Park Recreational Soccer League, believes that the referee can be somewhat of a leader on the field who the children respect. He tries to set a good example for the players, in addition to keeping the game fun and safe. "I try to show them what sportsmanship is and also show them the rules of the game," he says.

While Dowd and Sezhian watch students perfect their shots and passes on the field, senior Jill Lidsky helps them master their strokes in the pool. For Lidsky, working with children is practical experience for her long-term career goal of becoming an athletic trainer for adults — transforming her job as a teacher into a skill-building opportunity much more serious than just an easy way to earn a few bucks. 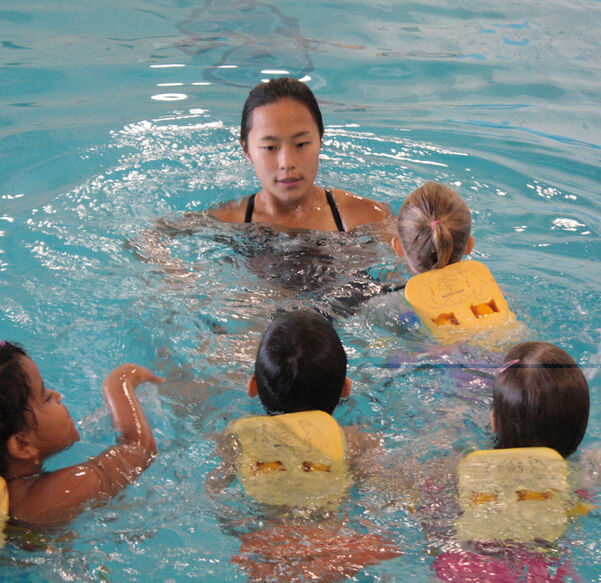 Working in youth sports is not all fun and games. It also requires confidence and control. Dowd explains that referees are inevitably going to face criticism for their decisions. "You have to make split-second decisions," he says, "and whether or not you make the right call, one team is going to be angry." And though parents and coaches are usually well behaved, Korth says that they can occasionally become overly serious and even violent about what is supposed to be a pleasant learning experience. "Dealing with coaches and players acting in an unfortunate manner is the most difficult and frustrating part of refereeing," he says. Korth adds that if such a situation does occur, a referee should warn coaches that they are out of line, and if the problem does not go away, the referee should take steps to penalize the coaches, like showing a red card.

Lidsky says that in her two years of experience teaching swimming lessons at the YMCA, she has faced similar difficulty in maintaining control of rambunctious children. "It takes a lot to get kids to listen. You have to be repetitive and strict, because kids don't always listen the first time," says Lidsky.

Even if it can be a difficult job, teenage teachers, coaches and referees in youth sports still find their work rewarding. Lidsky enjoys experiencing the result of all her hard work with children in the pool. "I love to see all their improvement. Some of them never learned to swim before, but are now swimming in higher-level classes. I started as a student in these classes when I was little, and it's nice to be in the teaching position now," she says.

Sezhian says that his experience as referee has taught him about himself. "At the beginning I wasn't assertive enough, but I have learned to be more in command and to always speak up," he says.

Dowd, Sezhian and Lidsky all agree that working with children is not an easy task. But at the end of the day, as the players walk off the field with dust on their clothes, scrapes on their knees and smiles on their faces, teenage youth sports teachers, coaches and referees have the satisfaction of knowing they have been a part of a community-wide effort to teach children the values in teamwork and sportsmanship and give them a healthy future.