Once a Blazer, always a Blazer

In the fall of 1991, Emanuel Charles entered Blair as a freshman. Four years and 12 sports seasons later – in 1995 – he graduated. Never in a "million years" did Charles think that one day he'd return to Blair.

Eventually, that notion changed. In the fall of 2004, Charles re-entered Blair, this time, as a teacher. He joined fellow Blair alumni 1984 graduate Louis Hoelman and 1980 graduate John MacDonald in the Physical Education department. Today, the three graduates fill in the roles of the staff members who once taught and coached them.

Life as a Blazer

During their years as students, all three teachers say that they really enjoyed Blair. "I loved it," Hoelman says with conviction, attributing his love to the multitude of people from different cultures and backgrounds. "The diversity [at Blair] really gets you ready to fit into the population of the area," he notes. 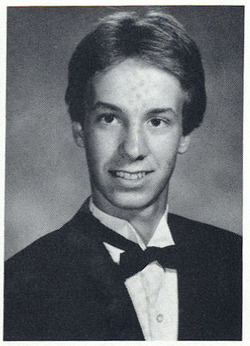 Photo: Mr. Hoelman is all smiles his senior year, from the class of 1984.

Photo: Mr. Hoelman is all smiles his senior year, from the class of 1984.

Growing up in the area, Hoelman was familiar with much of the Blair community. He knew MacDonald "through the neighborhood" and was friends with fellow ex-Blazer history teacher Kevin Moose and his brother.

MacDonald also made many close friendships while at Blair – most of which have stood the test of time. "[My] friends now are friends that I know from Blair," he says, laughing.

Aside from their alumni status, the three teachers share another common bond – athletics. Charles, Hoelman and MacDonald were all actively involved in school sports. Charles says he excelled in basketball, but also played football, volleyball and ran track. He hoped to continue his basketball career in college, but was shortchanged by a hurt ankle. "I was a jock," he says of his school years.

Likewise, Hoelman played golf – which he captained for three years – in addition to baseball and basketball. MacDonald played baseball throughout his high school years. In college, he helped coach the Blazer JV baseball players, a stint that was responsible for his return to Blair as a Health teacher.

The road [back] to Blair

While he coached JV Blazers, some teachers persuaded MacDonald to "look into teaching," he says. Still, the University of Maryland student wasn't convinced, and he graduated with a degree in Journalism and Public Relations.

Photo: MacDonald graduated in 1980 returned to coach JV baseball. Today. he is the head coach of the Varsity team. Photo courtesy of Silverlogue

Photo: MacDonald graduated in 1980 returned to coach JV baseball. Today. he is the head coach of the Varsity team. Photo courtesy of Silverlogue

Upon graduation, MacDonald realized that the journalist's life wasn't for him. "I enjoyed journalism, but being an actual journalist would be hard for me," he says. So, he went back to school for a teaching degree. In 1990, armed with a teaching certificate from Bowie State University, MacDonald entered Blair as a Health teacher. Today, he holds not only that post but also the job of head baseball coach.

Though MacDonald and Hoelman were never in school together, they grew up in the same area and were acquainted with one another. Later, when MacDonald helped coach JV baseball at Blair, Hoelman was one of the players. The two became closer friends while at the University of Maryland. "We were friends in college," Hoelman says, laughing. "We were both in college a little longer than we should have been."

Hoelman was a sophomore in college when he decided to become a physical education teacher. For the former student – who took physical education during all four years of school – teaching at Blair was the obvious choice. "I knew I'd come back and teach at Blair," he says. After teaching briefly at other area schools, Hoelman came back to his alma mater in 1998.

For Charles, on the other hand, teaching at Blair was purely coincidental. Before starting college, Charles had decided to become a teacher. A friend talked to him about teaching, and Charles' interest was piqued by the physical education syllabus, which appealed to his athletic lifestyle. "I liked the curriculum," he says. After graduating, Charles interviewed for several positions. When one at Blair was offered, he accepted.

An ex-star star who participated in a myriad sports, Charles encountered many of his former coaches and teachers upon returning to Blair. During his years as a Blazer, Charles' volleyball coach was current physical education resource teacher Cynthia Changuris and his football coach was Athletic Director Dale Miller. Charles admits that it was a change coming back and working with his former coaches. "For the first couple of months, she was Ms. Changuris," he says. "She wasn't Cynthia." 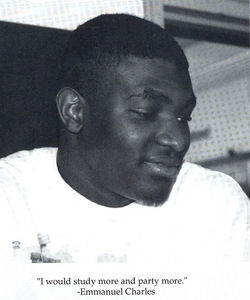 Words from the wise

Photo: Charles left underclassmen with some wise insight in the 1995 yearbook. Photo courtesy of Silverlogue

Photo: Charles left underclassmen with some wise insight in the 1995 yearbook. Photo courtesy of Silverlogue

Today, Hoelman has befriended some of his old teachers – including Maureen Diodati, who once taught him English. "Ms. Diodati and I had lunch the other day," he says.

But, for the three alumni, befriending old coaches and teachers is just another perk of the job. "I'm enjoying my experience as a teacher," Charles says. Still, he does maintain that the job is a lot tougher than what he would have expected as a student. "Now, there's a lot of stuff I have to go through," he says. "You have to be really careful with what you say and how you behave with the kids. You have to be a good role model."

Looking back with a teacher's point of view, Charles also notes that there is one thing he'd like to change about his high school career. "I wish I was nicer to my teachers," he says. "Sometimes kids don't think that teachers are just human beings, too," he says.

Though his work is sometimes unnoticed by students who "don't have a genuine love for their teachers," Charles says that most of his kids today are "great," which, for him, makes the job fun. "I love all my kids [and] I want to help all my kids," he says.