"Once Upon a Mattress" springs into action

Click here to read a review of the play.

On opening night, the lights dim and the curtains part to reveal a skillfully painted set and actors and actresses dressed in intricately designed costumes. Stress, excitement and effort have built up in the directors, cast, crew and orchestra for this very instant, as they all contribute to this long-awaited moment. The entire production only lasts two and a half hours from the first sounds of the overture to last beat of the epilogue, but it took months to prepare for this night.

"Once Upon a Mattress," Blair's spring musical, is based on Hans Christian Andersen's tale, "The Princess and the Pea." Complete with a fanatical Queen, a scheming Wizard, an amusing Jester and a lively group of knights, princes and princesses, the production is entertaining to watch and possibly even more enjoyable to be a part of.

The general plot is simple. No one in the kingdom can marry until Prince Dauntless (played by senior Sam Wight) first marries. His mother, Queen Aravain (played by both seniors Abigail Fraeman and Koyel Bhattacharyya on alternating nights), however, crafts one dilemma after another in an attempt to keep her son unwed. But at last, Winnifred the Wobegone (senior Elise Harvey), a princess from the swamp, swims the moat of the castle to enter as a contender for the prince's bride. She manages to win over Dauntless and everyone else in the castle but must first pass a test that the Queen and Wizard connive.

The comedic musical is one of director Anne Cullen's personal favorites. Cullen, an English teacher, saw the musical at Broadway in 1997 and "fell in love" with the tale. "It's light-hearted and whimsical," she says. Although Cullen has directed before, this production is her first musical at Blair. Filling the shoes of Blair's previous director, Kelly Newman, who temporarily moved to England, requires a lot of diligence and time.

Cullen began planning the production in June, before the school year even began. She started to visualize the image of the costumes, the movements on stage and the kind of students she wanted to play the roles. "Since I haven't had the experience of putting on a play here, I couldn't image who I wanted for each part," she remembers. "I had no preconceived notions."

In the musical, the multitalented actors and actresses are also singers and dancers. Tryouts to cast the roles occurred in early December, when over 100 students came to demonstrate their artistic abilities by singing a song of choice, reading a part and learning a dance. Cullen was forced to cut slightly under half of the students who tried out, an aspect that, she says, is one of her least favorite in the whole process. "There's more talent than there are parts," she believes. Still, the final cast list includes about 60 names, a sizeable group in comparison to past productions.

Among those chosen was junior Heather Hurt. Though she only has a minor role as Princess #12, according to Hurt, she gets the full experience by working side by side with such an eclectic group of students. "There's a crazy mix of people: crew and pit," she says, smiling. "I feel like my circle has been extended."

Senior Lawrence Lyons concurs. "I wanted to be a part of a Blair play before I graduated, spend some time with friends, and get to know more people," he explains.

Participating in a Blair production offers the opportunity to work side by side with a wide range of Blazers. Twenty-one percent of the actors and actresses are freshmen, 23 percent are sophomores, 26 percent are juniors and 30 percent are seniors. Adding to the diversity, minorities make up 35 percent of the cast.

Casting is only the first step. Staying committed to all of the duties that come with joining the production is a separate feat. "I tell the students, 'If you're feeling sick, tired, or stressed, think back on the decision you made on the first day. Stick to that,'" says Cullen. "It's a lot of hard work, but it's a lot more fun." 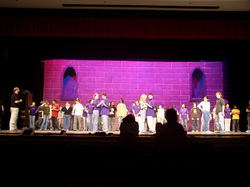 "Once Upon a Mattress"

Photo: One of the final rehearsals for the spring musical, "Once Upon a Mattress," concludes on the day before the teasers, Tuesday, March 2. Click the above picture to see a gallery of rehearsal pictures.

Photo: One of the final rehearsals for the spring musical, "Once Upon a Mattress," concludes on the day before the teasers, Tuesday, March 2. Click the above picture to see a gallery of rehearsal pictures.

Senior assistant directors Julianna Allen and Lillian Rosen agree that the hardest part of being on stage is incorporating all of the elements simultaneously. "There's such exhilaration when everything comes together," Rosen says.

"Everything goes on separately and comes together for the big night," says stage crew manager John Kaluta. Kaluta, who has worked on several previous Blair productions, deals with "everything the director doesn't want to do." This includes props, sound, background, and lighting. To put it simply, Kaluta says, "I deal with everything in front of the audience that doesn't have to do with an actor or a costume."

Initially, 60 crew members worked on the musical, but the number eventually leveled out to about 30. Like the cast, stage crew began work in early December. They, too, stayed after school from Monday to Friday to complete the set, maneuver the lighting, and perfect the sound. In fact, according to Kaluta, sound is one of the hardest components to deal with. "During a live performance, it's extremely difficult to have good sound quality," he says.

In order to fully develop each factor, Kaluta dedicated roughly thirty hours a week to working on the play. He spent a few of his lunches buying material, and for a previous play, he even had to make an emergency paint purchase at midnight. Even though running the stage crew is stressful and time consuming, Kaluta enjoys every aspect of his job. "Even though the hourly wage isn't much, seeing the outcome is worth it," he asserts.

Oftentimes, stage crew members feel underappreciated. "Something that bothered me was a musician who asked, 'Do they just push that stuff around?'" explains Kaluta. In reality, the complete set and all of the props were made by students, excluding the throne. Some of the costumes were even sewn by senior Kate Selby, sophomore Eleanor d'Eustachio and freshman Maile Zox.

As a member of the pit orchestra, junior Minh Huynh-Le has felt the same depreciation; however, she sees the production as a group effort. "Sometimes we feel underappreciated, but we're really there to support the cast," she says.

Students have many options if they choose to take part in producing the musical. "If you don't want to get messy or climb ladders, you can sing or dance," says Kaluta. "There's something out there for everyone."

Wight keeps returning because he "[loves] the people and being on stage,” and "Once Upon a Mattress" will be his fourth show. Wight also enjoys taking on different personas. "Becoming someone else energizes me," he says.

Senior Gloria Dowery, who has a role as a featured dancer in the musical, took interest in attempting something she had never done before. "I wanted to try something new," she says. "I'm not trying to win an award or anything. I just want to have fun."

For first timers, being on stage can be intimidating. "It's a different dynamic, a new experience,” says senior Martino Choi. "At first it was awkward; I didn't know what I was doing.”

However, according to Kaluta, getting that experience is one of his most motivating factors for continually partaking in the production. "It's about pushing people past where they think they can go. As a teacher or a coach, you must let people know they can do a lot more than they think," he says. "Youngsters build confidence. They get ahead."

Junior Kevin Biganmen is a prime example. He was a member of the stage crew last year and was eager to assist again. "After 'West Side Story,' I was like, 'Wow. I just helped make that happen,'" he remembers. "I was really proud."

In addition to learning the behind-the-scenes techniques and engineering of a play, some stage crew members, like junior Abel Rezne, work to complete their Student Service Learning requirement. "It's fun, but we also get a lot of community service hours," he says.

The week before the opening, the cast and crew worked until 10 p.m. For juniors like Kat Comisaik, the time was well spent. "We call this hell week. There's so much pressure," she says. "We work long hours, but we're like one big family."

On top of being time consuming, the musical can be highly nerve-racking. "Everyone's stressed. We're here five hours at night," Allen says. "When we get home, homework gets a little sloppy."

Hurt has encountered the same problem. "I get home late, and all I want to do is sleep," she explains. "Then the next day, I'm working feverishly at lunch."

As student directors, Allen and Rosen are exceptionally overwrought. Rosen, who is usually part of the cast, decided to stand off stage this time around, with the exception of a brief cameo. "[Directing] is a lot more stressful than acting," she says. "When you're acting, you're responsible for solely yourself. Now I'm responsible for everyone." For both Rosen and Allen, "watching everything come together and just waiting in anticipation is the hardest part in the end."

Thus far, the show has run relatively smoothly. The recent school cancellations have given Cullen the most anxiety. "The snow days just destroyed it. We'll be ready though," she says. "I don't have a fear we won't make it. Fear is a great motivator."

Although rehearsal time was dramatically decreased, Allen, too, believes that all will fall in place. "Nothing gets done on time. That's the rule of theater," she explains. "Everything just comes together in the end."

Due to a bad case of the flu, senior Idara Aquaowo, who has a major role as the Wizard, has had even less practice time, yet Aquaowo is as ready as she's ever been. "I get the most important role," she boasts. "I do cool tricks; it's total hotness." Late nights juggling her role in the musical and her work at school didn't help her recover, but Aquaowo, who took part in "West Side Story" and "The Merry Widow," is "personally motivated” to be involved. "If you have a passion, it's all worth it. I love doing plays. It's the love of the craft."

Hurt is motivated by the joy she believes the musical will bring to the audience. "My friends will laugh,” she explains. "That makes it all worth it."

Previous productions, especially musicals, proved to be successful. Two years ago, "West Side Story" earned $20,000 in ticket sales, while the total cost was only $9,000. "Blair has a lengthy tradition of putting on outstanding plays," says Cullen. Cullen and the entire production crew plan to keep the reputation alive with "Once Upon a Mattress."

"Theater is life," says Allen. Now, for Allen, the cast, crew, and orchestra, the only thing left to do, along with the audience, is watch it all unfold.

Tiffany Yee. <i>tic toc</i> Tiffany is... WAITING FOR SOMEONE TO WRITE HER BIO. More »