One girl gives gaming a shot

A fun first foray into the video game world

I've always blamed my inexperience with videogames on the fact that I don't have an older brother. But instead of shirking responsibility, I have finally decided to take matters into my own hands and find out for myself what gaming is all about.

My excuse might just be a sexist generalization, but when I was little, the only people I knew who played video games were boys. That was, until I met Blair alumna Tina Shook. Tina, of course, has brothers. She has three of them. She excelled at video games and was, in that respect, my idol. 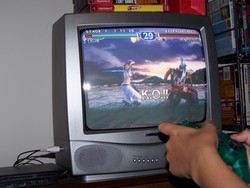 The dominance of males in video gaming world is a nationwide trend. According to a study by Michigan State University, boys spend twice as much time playing videogames as girls.

The extent of my video gaming experience was getting beaten to a pulp in some 007 game while hanging out with one of my sister's friends. So I decided to embark on my own journey against the odds. My plan: to follow in Tina's footsteps. But first, I needed a tutor.

After considering my options carefully, I approached my old friend, fellow Chips' staffer and avid video gamer, junior Simon Kanter about tutoring me in the electronic arts. Kanter graciously agreed with magical words somewhere along the lines of "sure, whatever."

Since Kanter was my tutor, I didn't come into contact with any games geared specifically towards girls (Kanter is "not at all" into the only girls' games he knows about-- "ones involving Barbies"), but that does not mean that such games do not exist.

In fact, the genre of video games specifically geared towards girls is growing to meet consumer demand. According to Womengamers.com, 43 percent of PC gamers and 35 percent of console gamers are female. Womengamers.com also notes that games geared towards girls tend to center around things such as shopping and fitness, though women also play gender-neutral games such as puzzles and mysteries and often participate as female characters in games typically geared towards males, such as combat and sports games.

I, however, had no intention of playing a "girly" game. Not that I have a problem with pink or shopping, but when it comes down to a choice, I would by far rather virtually beat up a 250- pound man than play something with a title like "Clarissa goes to the Dance!" Kanter, of course, had no qualms with my position.

Getting my game on

It was already dark on the Wednesday night that I met Kanter to begin the learning process. He took me to his usual gaming locale: his friend Josh Samors's basement.

I was filled with eagerness as I surveyed the various gaming systems, cords and equipment littering the floor in front of the TV. I was far less excited and more gripped by dread as Kanter and Samors proceeded to discuss RPS's, MMORPG's and AV cables in some techno-babble language.

Seeing that I was completely baffled, Kanter decided to start me off slowly. As if talking to a child, he explained that I could begin with some training exercise tutorials before taking the plunge into a full-scale game.

Samors set up a PS2 game called Dragonballz Budokai, a Japanese animé fighting game based on a TV show.

At first I scoffed at the cheesy dialogue of the practice exercises, but after a while, I found myself trying to hide a smile when I successfully "charge attacked" and K.O.'d my opponent. After a few practices requiring "combined attacks" I felt too pathetic to keep humiliating my ego by doing game tutorials likely designed for third graders.

I fiercely lobbyed for a real fight and Kanter finally relented. But first, he warned me. "Even though neither of us have played this game, I have an inherent advantage because I have experience [with the controls]," he noted.

Despite Kanter's inexperience with this game, he still soundly whooped me in the first round, winning by a ringout while I flailed wildly with my controller on the couch, randomly pressing any and all buttons.

After losing the first few rounds, I found myself slowly mastering the controls. I was getting better and better. I had discovered I could make my character invincible for several seconds! Granted, I could only do it by accident and keep losing anyway, but it was a significant improvement from earlier.

Still, I was having a wonderful time. I couldn't help but feel a thrill as I pulled off some spectacular moves. I kicked and shoved Kanter's character. I began to shout inane insults like "Oh, burn!" as I clobbered him. When I began to lose again I was far less verbose.

Maybe I was actually getting good. Or maybe my trash talk intimidated Kanter. Or Kanter was just letting me win, because I won two rounds in a row! Whatever the reason, I was jazzed.

We stopped playing after Kanter had decisively won the game (he had 13 rounds to my five). I decided it was time for something new.

Kanter suggested a Gamecube game called F Zero GX, a futuristic racing game, which, it quickly became apparent, I was horrible at playing.

As it turns out, picking a car based on name alone may not be the best approach. But how could anyone resist something called "the Wild Goose?"

The racing game wasn't nearly as fun as the fighting game. It was too fast-paced and far too easy to crash or run off the course. I was disappointed that, since I was losing so badly, I couldn't scream insults at Kanter.

After losing the game three times by driving right off the course and dying, my patience failed me. Even though Samors let me win a game, I was too fed up to go on. I couldn't take it anymore; I gave up.

Somewhat mollified, I was willing to give another combat game a shot. Kanter recommended Super Smash Brothers, supposedly a "classic."

I chose Yoshi as my character. He is a cute green turtle, who, according to Samors, is "a beast." With a recommendation like that, how could I refuse?

As they geared up for the game though, I began to feel as though the game might not have been the best choice. There were too many Nintendo characters I don't recognize with too many powers that I didn't know anything about.

Sadly, Yoshi lost his last life long before Kanters' and Samors' characters did, but at least I found the game fun. Yoshi could do all these cool tricks like rolling over other characters as an egg and poking enemies with his tongue. By Yoshi's final death I had developed an affinity for the endearing little turtle, and was sad to see him go.

But none of that mattered, at least not to me. Kanter succinctly summed up part of the appeal of videogames: "You can start out as an ordinary person but by the end of the story you're fighting demons and wielding swords. It's amazing the stuff you can do."

While my first real experience with videogames was not entirely positive, I enjoyed myself. I don't know if I could become a true addict and play for 80 or 90 hours over a month like Kanter and Samors say they have done, but I could definitely do this again sometime.