One lunch, many benefits

The start of the 2019-2020 school year brought with it tanner skin, brand-new school supplies and unfamiliar teachers and classes. But the most prominent change to affect Blazers this year is indisputably one-lunch.

As the name "One Lunch" suggests, administration revised the school schedule to feature a single one-hour lunch during fifth period. For the last 20 years, Blair had divided the student body into two 45-minute lunches during fifth and sixth period. Students had limited options to eat in the Student Activity Center (SAC), out in the courtyard or along the first floor of Blair Boulevard. 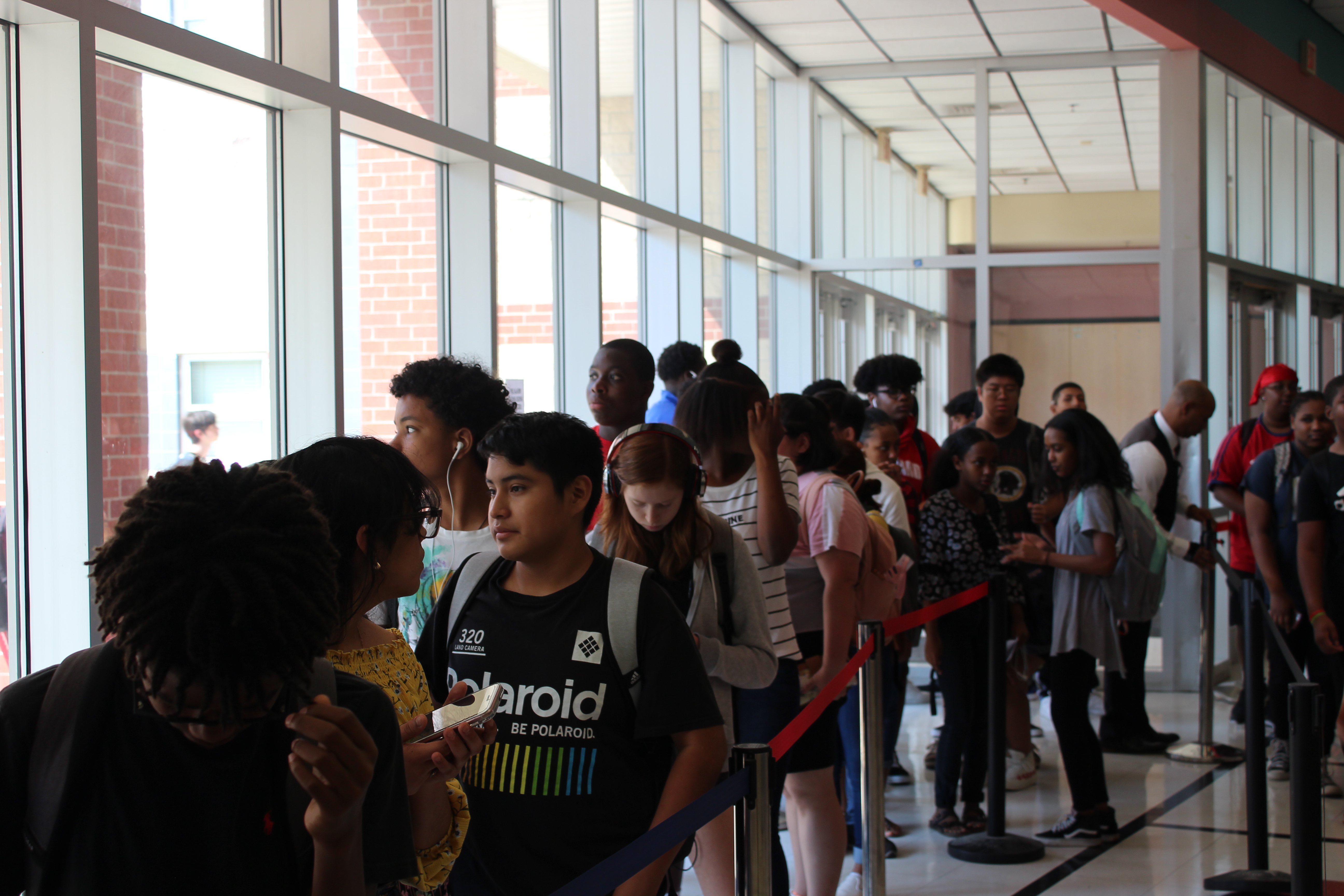 Photo: Students wait in line to buy food from the SAC.

Photo: Students wait in line to buy food from the SAC.

According to magnet coordinator Peter Ostrander, who led the logistics team in scheduling one-lunch, overcrowding, academic conflicts and suffering attendance rates in split-lunch were the main motives for changing the schedule. "There were three things that we were looking at that made us try to figure out if what we're doing for lunch the right thing," he said.

Change always comes with uncertainty, and unsurprisingly, Blazers are practically bursting with doubts and concerns about one-lunch schedule complications. Students worry about waiting in long lunch lines, having sufficient space to each lunch during the wintertime and finding people around the school.

A closer look at the logistics and features of the new schedule reveals that one-lunch not only resolves the limitations that accompanied the split-lunch but also provides a solution to the common doubts students have.

Putting all 3,200 students at Blair in one-lunch in order to prevent overcrowding sounds counterintuitive at first. "The first couple of days were way too crowded, because everyone was trying to find where and who to sit with," junior Sophia Kim said. However, while there are more students in one-lunch, there is also more room for them to move around and find a place to sit. The two-lunch schedule split students into groups of 1,600 that were confined to only the SAC and Blair Boulevard. "1,600 students in this small area versus 3,200 students in the whole school, well that's more square footage per student," Ostrander stated.

The same reasoning applies to sufficient seating during the wintertime, a concern that many students share. Finding space for all the students to eat lunch indoors during the colder months will actually be easier than in previous years. Students can choose to sit in the numerous tables and couches scattered in the halls or any classroom a teacher keeps open.

Others are troubled by the doubled number of students who need to buy lunch from the cafeteria. "It's fine if you can get here early enough for the lunch line," junior Bontle Mowe said.

To reduce the long lunch lines and ensure that students buy their food in a timely manner, food kiosks located on each floor sell fruit, salad, sandwiches, drinks and other popular menu items. According to Johnson, the kiosks sell between 85 and 105 lunches a day, "which means 85 to 105 fewer lunches sold in the SAC." 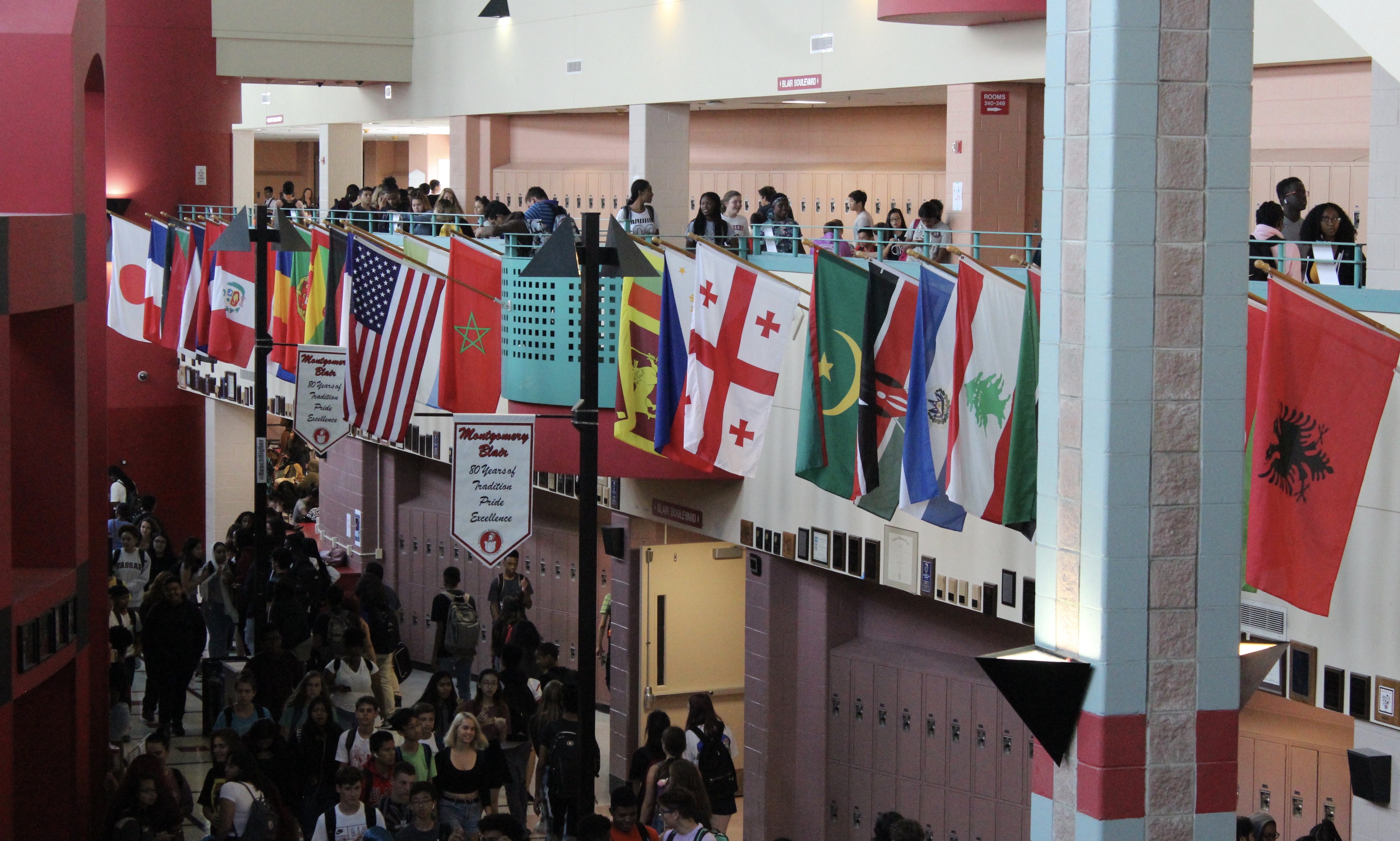 Photo: Students walk to one of various locations where they can eat lunch

Photo: Students walk to one of various locations where they can eat lunch

One-lunch also provides more opportunities for students to find academic support. Students don't need to worry about a teacher having a class during their lunch period when they plan to retake a quiz or ask for help.

Principal Renay Johnson adds that one of her favorite aspects of one-lunch is academic support because of the progress the students are already making. "Achievement went up in the school because people got academic support," Johnson said.

Attendance rates during the middle of the day also increase since the new schedule lessens the temptation to skip class around lunchtime. "We had a much lower attendance rate during fifth and sixth period than we did during any of the other periods…there were students that were double lunching," Ostrander said. With every student in class during sixth lunch, students won't have any reason to skip sixth period over any other class.

In addition to academics, one-lunch increases participation and organization in lunch clubs. All members can get together without half the club being uninformed of decisions or events that occurred in a different lunch period. If they are not at a club, students can also play sports in the gym, watch movies in the auditorium or participate in other events going on during lunch.

Though the administration hasn't addressed each and every concern students have about one-lunch, the program provides effective solutions to many problems in the split-lunch schedule. Administration will continue to improve lunchtime by taking suggestions and complaints from students, teachers and parents.