The Blair varsity football team was shown no mercy on Thursday night, as they fell to 0-3 after a brutal loss at home to the Gaithersburg Trojans, 45-0.

Gaithersburg's defense came out strong against the run-dependent Blair offense early on, forcing the first of many punts by Blair on the opening drive. The Trojans proceeded to march down the field, running right up the middle and finding receivers deep. A long Gaithersburg reception landed the visitors right on the Blazers' doorstep, and a one-yard quarterback sneak and an extra-point put the Trojans up 7-0.

Blair seemed to find a rhythm as they responded with a drive of their own, including a sharp run by junior running back Jonathan Haughton into Trojan territory. However, the Gaithersburg's defense stumped Blair again, forcing the offense to give up the ball. 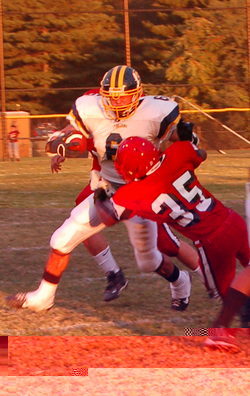 With four minutes left in the first quarter, Gaithersburg wasted no time with a 54-yard passing strike to take the Trojans to the 10-yard line. Senior running back Dan Atwood then caught a pitch to the left and ran it in for a touchdown, increasing the Gaithersburg lead to 13-0.

In the second quarter, the Blair defense struggled against the run and continued to allow the Trojans assault to flourish. On one drive, the Blazers surrendered a 40-yard run to their own 30-yard line, and on the following play, Atwood ran the rest of the way to the goal line. The besieged home team found themselves down 25-0 at halftime.

The Gaithersburg dominance spilled over into the second half. The explosive Trojan ground game overmatched the Blazers as Gaithersburg gained yardage with astounding efficiency. Just three and a half minutes into the third quarter, the Trojans showed no sign of letting up, extending their lead on a short touchdown run, 32-0.

To add to the misery, three Blair players went down with injuries, including starting sophomore quarterback Alex Egber. Fortunately, all three players were able to walk off the field on their own power.

The Trojans would take no pity with the scoreboard clearly in their favor late in the game. Gaithersburg posted two more touchdowns before settling the final score at 45-0.

With Egber sidelined, junior quarterback Victor Wang came in to show off his arm. In search of silver lining, Wang eventually completed a long pass play that put the Blazers in scoring range. After a series of penalties, Blair found themselves on the 5-yard line with eight seconds left. Wang dropped back, avoided a sack and then delivered the ball into the hand of Haughton, who proceeded to drop the pass in the end zone. The final seconds went down, along with the heads of many disappointed Blazers.

"Statistically, we are the worst team," said senior linebacker Rex Jarrett. "We can and will play better, but it's looking real foggy right now."