Online tickets available for "Beauty and the Beast"

The reserved seats - the first ten rows in the center section of the auditorium - are available both online and from attendance secretary Roxanne Fus in the attendance office any time during school hours. Student and senior citizen tickets are $4, and adult tickets cost $7. An extra one-dollar service charge will be added to these prices for tickets purchased online; there is no added cost for reserved tickets purchased from Fus.

While buyers can select exact seats for tickets purchased from Fus, the online sales can only guarantee the next best available reserved seats for that performance. "Online is convenient, but you take what you get," Kaluta said. Kaluta examines each online order by hand - he has 17 already - and plans the seating arrangement. "It's half electronic, half by hand," he explained.

The online service will end March 1, regardless of whether the tickets are all gone. Reserved sales from Fus will continue until the first ten rows are sold out, though Kaluta presumes they will be gone by that date. Remaining tickets can still be purchased at the door as usual.

The online ticket service is maintained by Michael Minetree, Kaluta's nephew and the voice-over coach and sound consultant for the musical. The service requires patrons to pay with a credit card, but Minetree sends Kaluta "daily reports" of sales details to ensure secure transactions.

The extra dollar fee is a necessary part of any Internet transaction, according to Kaluta. "Any time there's a credit card sale, some money goes to the credit card company," he said. "The extra money, part of it goes to defray the expenses of the company we're using." 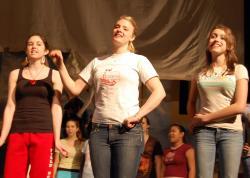 Photo: Senior Francesca Blume leads the teacups in one of the many musical numbers in "Beauty and the Beast."

Photo: Senior Francesca Blume leads the teacups in one of the many musical numbers in "Beauty and the Beast." Photo courtesy of Julia Seiger.

Kaluta stressed the bargain price of Blair tickets. "Other schools charge up to $20 a seat, and that's for students or adults," he said. "We make it as low as we can stand and still cover expenses."

The "kiddie show," which is also new to the musical this year, has been on hiatus since "Fiddler on the Roof" was performed at the old Blair, Kaluta estimated, but was reinstated due to the younger appeal of the Disney musical. "We're inviting 700 students from all our feeder schools to come and watch the performance. 'Beauty and the Beast' is the perfect show to bring back that student audience," he said.

As usual, Kaluta is offering free tickets for faculty who request them. But this year, staff members must specify a show date with Fus to receive a maximum of two free tickets for unreserved seats.

The cast will also perform the usual 45-minute teasers for Blazers during 5A and 5B on March 6 and 7. "Everyone is going unless their teachers don't want them to," co-director Miriam Plotinsky said. This is Plotinsky's first year co-directing alongside Kelly O'Connor. For the past few years, Plotinsky has served as vocal director.

From the cast of players to the pit orchestra to the stage crew, five percent of Blair students are involved in "Beauty and the Beast," an adaptation of the Disney classic, Kaluta said. Seniors Mindy Or and Christoff Visscher play the romantic leads Belle and the Beast. "Most students at school grew up with this play, or at least the movie version," Plotinsky said. "It's a part of their culture." 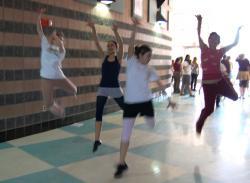 Photo: The wolves practice their choreography outside the auditorium as other cast members rehearse on stage.

Photo: The wolves practice their choreography outside the auditorium as other cast members rehearse on stage. Photo courtesy of Julia Seiger.

With about a month until opening night, the Players have started working with the orchestra and had their first full run-through last Thursday. "It's really a complete package," Plotinsky said. "Great dancing, wonderful music and a great plot line."

Intricate costumes and promotional posters are still in progress according to O'Connor. "A couple things are just getting started; there are a couple problems not solved yet," Kaluta concurred. Logistics aside, he said, "I think we're going to have a pretty good show."