Blazers showcase a variety of talents at Silver Quill event

At the first open mic of the school year, Blazers gathered in the media center to watch their peers recite poetry, read short stories, sing and play music. The event, which ran through periods 5A and 5B, included a total of 14 performances and was emceed by Silver Quill's Editor-in-Chief senior Emily Jones and junior Alessandra Mantovani. The Silver Quill staff also provided refreshments which kept attendees' mouths full as they listened to performances. 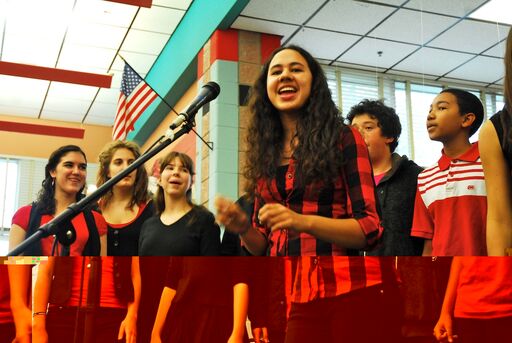 The Silver Quill open mics, which were started last year, give Blazers of every grade an opportunity to show their artistic talent. "The goal of this open mic was to encourage students to express themselves by performing or to be inspired by the performances to do so," Jones says.

Many veterans and fan favorites of the Silver Quill open mics were present. Seniors Alex Denton and Ezekiel Leeds, who sang an original song with guitar accompaniment, were familiar faces in the open mic scene, and received large support from the crowd. Blair's well-known a capella group, InToneNation, also won over the audience with some of their classic pieces, "Material Girl" and "Stand by Me."

For other performers, however, the environment was new. Senior Abdul Nuriddin had performed many times before, but never at an open mic at Blair. "I'd wanted to play here for a long time, because it just seems like a comfortable place," Nuriddin says. Nuriddin serenaded the crowd with an acoustic rendition of The Fray's "Look After You" and accompanied senior Michelyn Bouknight in her brilliant cover of Alicia Key's "No One."

Another newcomer was junior Talia Mason, who decided to recite two original poems after receiving encouragement from friends and family. "I showed my work to a bunch of people, and they told me I should perform," she says. "I'm glad I did it." Mason also enjoyed seeing others perform with different styles. "There was a lot of variety," she says.

For junior Lauren Rust, who played the guitar and sang, the open mic was a spontaneous decision to express her artistic talent. Not signing up in advance, Rust decided to take advantage of the welcoming opportunity. "I borrowed my friend's guitar, and the words were pretty much made up on the spot," she admits. Rust expressed that the experience was well worth it. "The audience and everyone were so great," she says. 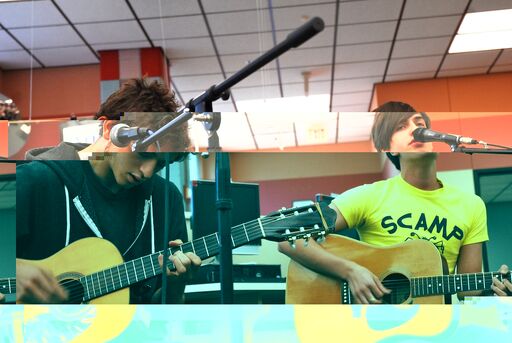 Jones and Mantovani maintained flow throughout the event as 5A and 5B lunch students shifted in and out. In between performances, they encouraged the attendees to submit their work for publication in Silver Quill. The theme of this year's edition is "Ink Track." "We hoped to spread word about Silver Quill and to encourage students to submit their work," Jones says. According to the audience response, the message came across. "Afterward, I had people approach me asking how to submit their work and how to sign up for the next open mic," Jones adds.

The variety of performances divulged a blend of different feelings. Juniors Emma Kaufman and Katerina Klavon sang songs with a sunny tone, while senior Jennifer Wang passionately narrated a story by writer Sonya Sones, which expressed the feelings of a struggling 13-year-old girl. The voices of all performances, though, received positive reactions from the audience. "It is just so cool," Rust said. "It's like a big family."

Members of Silver Quill take pride in opening their stage to anyone willing to perform. Jones expressed that she would like to see an even greater wealth of talent at the next open mic. "Most of the performances were seniors this time, but we don't want this to discourage the younger students from performing," she says.

This event was the first of many set to occur throughout the school year. Both performers and attendees echoed excitement for future opportunities to share and appreciate each other's talent. "It's nice to know that Blair has a strong musical and poetic community," Nuriddin says.