Their eyes were on ABC

The highly anticipated Oprah Winfrey presentation of Zora Neale Hurston's "Their Eyes Were Watching God" aired on Sunday, March 6, at 9 p.m. on ABC and received mixed reviews from Blair staff and students.

"Their Eyes Were Watching God," published in 1937, deals with the life of Janie Crawford, a middle-aged black woman living in the 1920s, and her quest to gain a true sense of self. Janie, played by Academy Award-winning actress Halle Berry, marries three times, and two of her husbands are extremely unpleasant. Her third marriage, however, is fulfilling. Tea Cake (played by Silver Spring native Michael Ealy) is 12 years her junior and comes into her life just nine months after the death of her second husband. With charisma and charm, Tea Cake shows Janie love from a different angle and allows her to be herself. 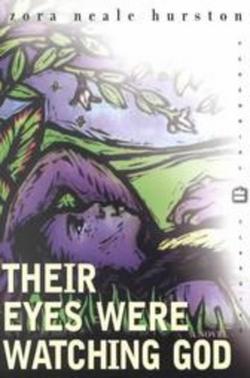 Photo: "Their Eyes Were Watching God," by Zora Neale Hurston, published in 1937.

"Their Eyes Were Watching God," by Zora Neale Hurston, published in 1937.

As Hurston's novel is a part of the 12th grade English curriculum at Blair, several English teachers and students watched the first-ever film adaptation of "Their Eyes Were Watching God" last Sunday. Some felt Winfrey's rendition lacked meaningful content that the author intended to convey. American Studies teacher and English Resource teacher Vickie Adamson strongly feels that the producers inaccurately portrayed the characters and the reasons for their actions, thus misleading viewers about the book.

For Adamson, Hurston's novel is "one of the best books ever written" because of its strong protagonist and lyrical language; however, she said the movie failed to evoke a similar feeling in her. Many seniors who read "Their Eyes Were Watching God" in English class, including Simone Chukwuezi, feel that the overall meaning of the novel was not portrayed in the movie because specific scenes were left out of the film. "The movie was not an accurate representation of the events in the novel because it neglected [to include] some of the more emotionally significant parts of the book," says Chukwuezi, "and as a result, viewers were not really able to understand what Janie was going through."

To senior Sheri Lawal, a viewer who watched the film and never read the book might view Janie as someone who is "crazy," which is the opposite of the powerful character represented in the novel.

Adamson agrees. "She didn't seem to be a complex, thinking woman who was searching for identity. [In the film], she seemed driven by passion, which was not the only driving force in her life," she comments. Adamson adds that Janie's character seemed more like Berry rather than the protagonist Hurston so eloquently portrays. "When you take somebody based on their star status rather than on how well they depict the character, you get it wrong," she says.

English teacher Sandra Ivey believes that the casting was done well, though she too was disappointed by the lack of complexity in the film. "I like that they cast [Berry] correctly, but she didn't age. In the book, she aged 20 years," says Ivey. She also says that Ealy was an appropriate choice as Tea Cake because of his "thug appeal," though she thought he appeared too close to Janie's age. In addition, Ivey was upset that Janie was made out to be downtrodden at the start of the film. "When Janie returned to Eatonville, Oprah portrayed her as bedraggled," says Ivey.

Adamson also points out several historical inaccuracies in the film, such as the modern hairdos and clothing the characters sport. Furthermore, she says the African Americans seem "affluent" in the film, and there is even a scene when a white doctor appears in their town when Tea Cake falls ill. However, this occurrence does not take place in the novel and instead "distorts history," according to Adamson. "Hurston left white people out of the book because she doesn't deal with race relations [in her novels]." 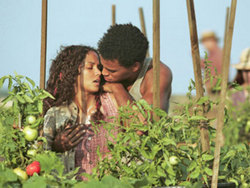 Photo: Halle Berry and Michael Ealy during a scene in Oprah Winfrey's rendition of "Their Eyes Were Watching God."

Halle Berry and Michael Ealy during a scene in Oprah Winfrey's rendition of "Their Eyes Were Watching God."

Janie's grandmother, Nanny, is also misinterpreted by the film, Adamson believes. Nanny is portrayed as "an educated little school teacher" rather than as a former field slave who wants her granddaughter to marry a rich man so she can escape society's financial burdens. The film fails to mention Nanny's belief of women being the mules of the world, which, to Adamson, is the driving metaphor in the novel.

Despite the film's inaccuracies, Winfrey's rendition did have impressive cinematography that was extremely enthralling to many of its viewers, including English teacher Judith Smith, who suggested that students watch the film. "It's beautiful to look at," says Smith of the camera work and the casting of Berry and Ealy. Smith is also glad that there is finally a movie to complement her lessons. "I'm extremely happy that they've created something we can use to teach," says Smith. "A lot of students are put off by the southern dialect, and this will really wake it up, bring it to life for them."

Senior Antoinette Godwin-Cole, who studied the book in her English class, feels that the movie did the book justice and that the vivid images give readers a good understanding of what they have read.

Although Ivey says there were many omissions that she did not understand, if the movie is approved by MCPS, she will use it in the future to assist in the teaching of "Their Eyes Were Watching God." She believes the book is relevant to the curriculum because of its historical values and solid writing. "I think it's important to teach so that students can have exposure to one of the dynamic writers of the American canon," says Ivey. "['Their Eyes Were Watching God'] captures an important time in history."

Feza Kikaya. Feza Kikaya is finally a SENIOR in the CAP program at Blair. She enjoys driving, hanging out with friends and laughing. Most importantly, Feza is counting down the days to graduation so she can begin a new chapter of her life in college. Her favorite … More »