Judge makes the right decision regarding an obscene gesture

"Order in the court." Americans all over the country are familiar with this phrase and it is these four words that have become a crucial part of our justice system. Under the Sixth Amendment, the accused has the right to a fair trial. When spectator Matthew Bartlett, 28, gave prosecutor Jeff Ashton the middle finger during the Casey Anthony murder trial, Bartlett jeopardized the sixth amendment rights of the accused; this was justification for the judge's decision to order the arrest of Bartlett on the spot. 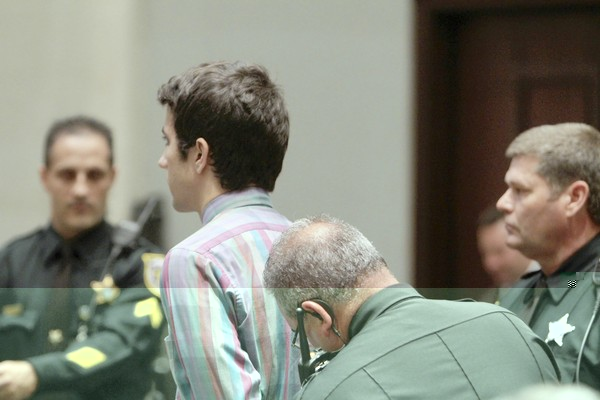 Photo: Matthew Bartlett was arrested after giving a prosecutor the finger.

Photo: Matthew Bartlett was arrested after giving a prosecutor the finger.

Bartlett, a TGI Friday's employee from Orlando, Florida, was watching the Casey Anthony trial in the Orange County Courthouse when, in the midst of the trial, he quietly slipped a prosecutor the middle finger. He was escorted out of the room by a court deputy and brought back after the jury left. Judge Belvin Perry held a trial and immediately sentenced Bartlett to six days in jail and ordered a $400 fine. All of this was broadcasted live on national television.

Although Judge Perry has received criticism for being too harsh on Bartlett, the legal system needs such strictness in order to function. Had any member of the jury seen this gesture, the trial could have been deemed a mistrial, and the entire proceeding would have had to restart. Trials are extremely costly and with a nationally recognized trial like Casey Anthony's, expenses add up. The 9th Judicial Circuit Court in Florida estimated before the trial began that it would cost at least $360,000. This money comes from taxpayer dollars, and in a recession, it is crucial to prioritize where this money goes. By disregarding the formal legal decorum, Bartlett jeopardized both the outcome of the trial and failed to realize the huge effects that his actions would incur.

In the video of the incident, Bartlett says that he did not have a good reason for his actions - that, "it was just some stupid thing that I did." In a culture where it is common to hear cursing and see obscene gestures, people should know where to stop. At the doors of most courtrooms are signs that read "any gesture, facial expression or audible comment showing approval or disapproval during a court proceeding is absolutely prohibited." Bartlett and other spectators read this sign as they entered the courtroom and were reminded again of the expectation each morning of the trial.

A courthouse is a house of justice - a place where a person swears under oath to tell the truth and nothing but the truth. In other aspects a life, a person can get away with lying or being rude, but a courthouse should serve as a place where impartial justice can be found. Hopefully this incident will serve as a warning for others who may feel the need to display their feelings in a courtroom. Although Judge Perry may have been harsh on Bartlett, this precedent needed to be set.