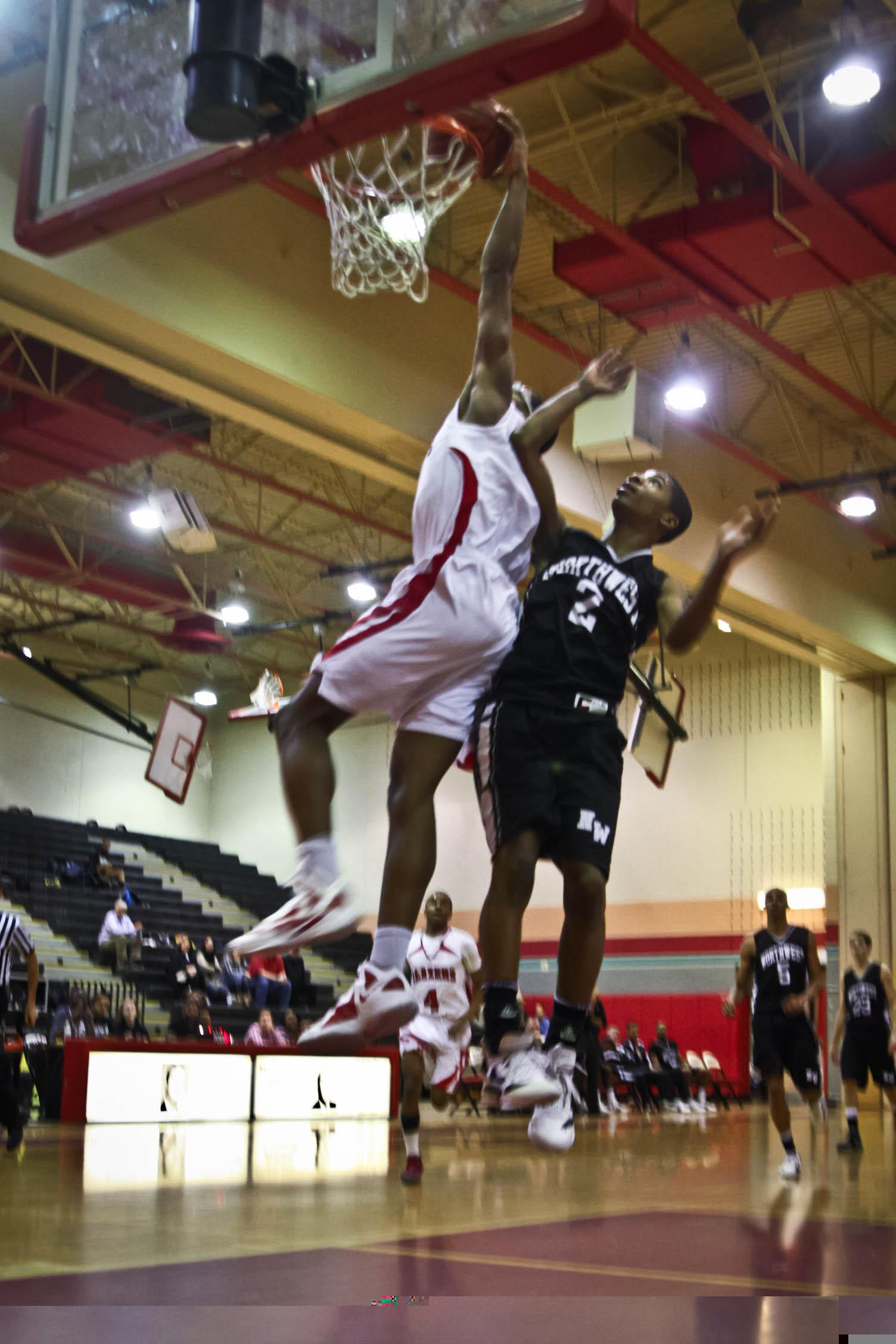 Echoing its Jan. 15 loss to Kennedy, the varsity boys' basketball team gave its home fans a moment of elation on Friday night, but could not provide them with a win. In the January game, junior Justin Kung inbounded the ball to senior Tucker Canary, who drained a three-pointer with forty seconds remaining to tie the game. The team then lost on a couple of Kennedy free throws. On Friday, Kung again inbounded the ball to Canary, who splashed a three from the top of the key with just 5.2 seconds left, forcing overtime. Blair could not keep pace in the extra period, however, and the Blazers (5-14) lost to the Northwest Jaguars (11-8) by a score of 64-60.

The Blazers started out the game much stronger than they had in recent games. Junior guard Theo Remy, who scored thirteen points, attributed this to the team's losing-streak-snapping win over Kennedy on Thursday. "It gave us confidence, and we were more prepared," he said.

Remy's three-pointer with 4:15 left in the first quarter capped off a 12-5 run by the Blazers to start the game. The Jaguars then responded with baskets from junior guard Elliot Gambrell, who finished with nineteen points, and 6'4" senior center Jacoy Gillum, who scored thirteen. At the end of the first quarter, Blair held the lead, 14-10.

The teams traded baskets in the second, as Northwest beat Blair's defensive pressure with relative ease, and Blair repeatedly responded. Remy hit another three to give the Blazers a 21-19 lead, which was immediately erased by the Jaguars, only to be retaken as senior forward Rick Narcisse took the ball down low and scored in the paint, drawing a foul in the process. An impressive block by Remy ended the quarter with the score 31-27, and Blair entered halftime on a positive note.

The third quarter has been Blair's Achilles' heel all season, and Kung is not quite sure why. "It's been an unsolved mystery," the junior said. "We're still trying to figure it out." Remy said that the team's post-halftime struggles may have been due to poor conditioning.

Regardless, Blair did not suffer the same type of third quarter collapse as it had in the past. In a defensive-minded quarter, Northwest outscored Blair 9-8, cutting the home team's lead to three. Both teams began employing a full-court press and forcing turnovers, setting the stage for a hectic fourth quarter. 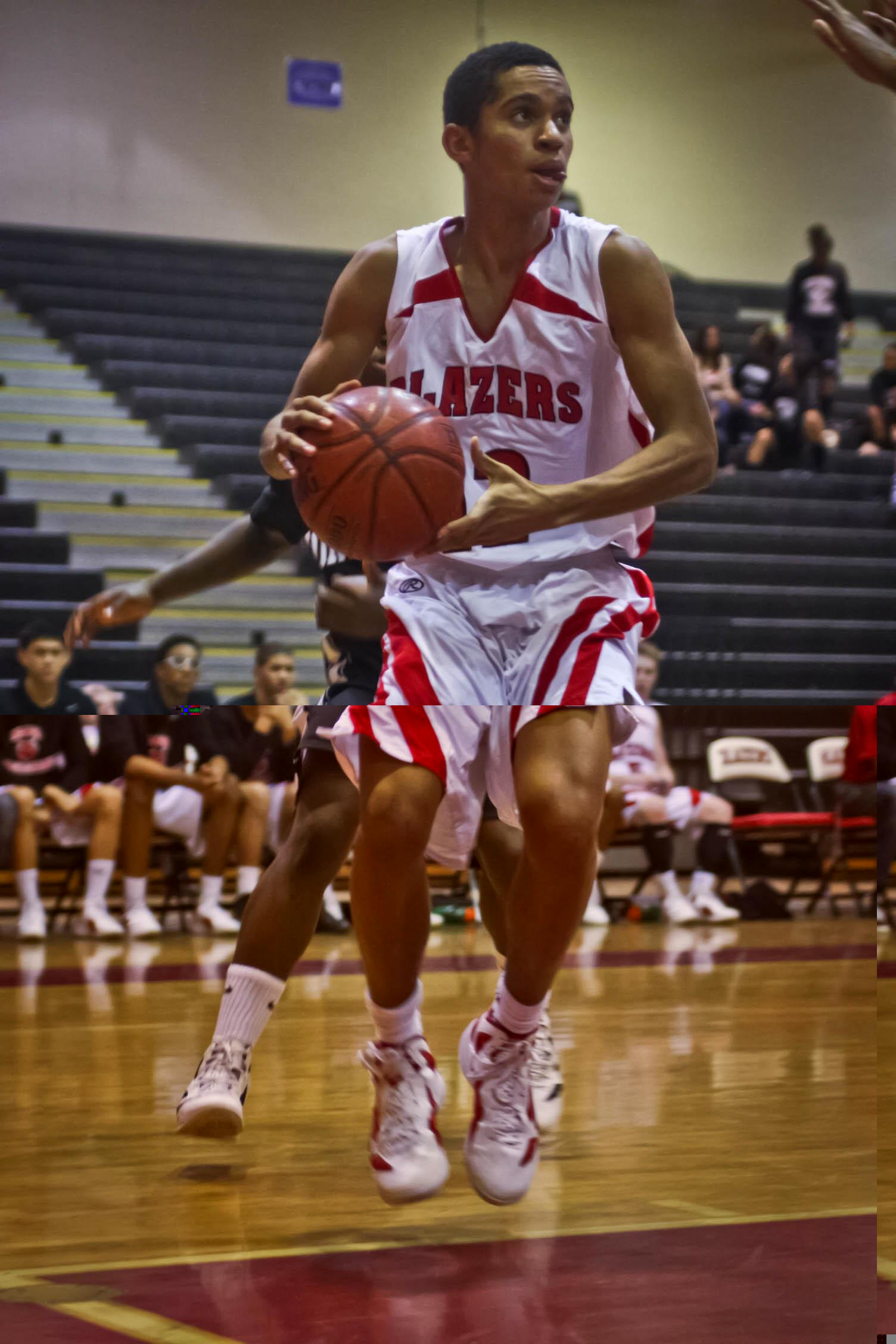 Senior forward Rick Narcisse, who finished with a game-high 21 points, started off the fourth quarter for Blair with an offensive rebound and put-back. Then, a small run by the Jaguars, facilitated by Gambrel, Davidson and Gillum, gave Northwest a 49-43 lead. The Blazers would never retake the lead, but they would come close. Another Remy three-pointer and a quick Narcisse layup cut the deficit to one. Another basket from Narcisse with a minute to go made the score 51-50, Northwest's way. Blair then intentionally fouled Davidson, who missed both free throws, giving Blair the ball, down by one, with 32.3 seconds left. An off-balance shot from Remy clanged off the rim, and Blair was forced to intentionally foul again. Northwest made both free throws, extending the lead to three. Blair called time-out with 11.6 seconds remaining, and then inbounded the ball from the sideline to Canary, who tied the game with a three, drawing nearly everyone on Blair's side of the gym out of their seats. Northwest could not convert before time expired, forcing overtime.

However, Blair could not perform in the clutch a second time, committing several turnovers in overtime. Northwest made its free throws and blocked late three-point attempts from Canary and Narcisse. The Jaguars outscored Blair by four in the final period to win the game, 64-60.

Though it will go down as a loss, Kung views the game as another step in the right direction. "We're starting to figure out how to play as a team," Kung said. Remy believes that the team needs to continue to improve, as it has been. "We need to keep working on finding ways to get Ws," he added. "And we need to get ready for the playoffs."

The boys' varsity basketball team will play its next home game against Einstein on Tuesday, Feb. 21 at 7:00 p.m. The game will be the last regular season game of the season.