"Out of Nowhere" is packed with substance

Maria Padian's "Out of Nowhere" is not your typical coming-of-age novel. The book exceeds the tired and typical teenage novel by presenting issues such as bigotry, immigration, and addiction in a way that gives it a sense of substance that many novels of the genre lack. While its means of delivering its messages isn't perfect, "Out of Nowhere" shows a refreshing sense of sincerity, sensitivity and heart.

The novel follows Tom Bouchard, a popular, successful student and soccer captain of Chamberlain High School. His small hometown of Enniston becomes a secondary migration location for Somali war refugees after the events of 9/11, some of whom join the school's soccer team. One of the students, Saeed, quickly becomes the team's most valuable player, until questions about his eligibility produce difficulty for both him and Tom.

Despite what one might think, "Out of Nowhere" is not just a book about sports. It also presents challenging concepts such as casual racism, addiction, religion and immigration in a respectful and sensitive manner. Soccer both brings people of different backgrounds together and pushes them apart. The game descriptions are action-packed and gripping, even for readers who aren't soccer fans.

An interesting aspect of the novel is Tom's social status. Many young adult novels follow the teenage outcast, but Padian turns this trope on its head by writing her main protagonist as smart, athletic and popular. She provides a fresh, new perspective of the "popular" kid that doesn't portray him as a one-dimensional brat. 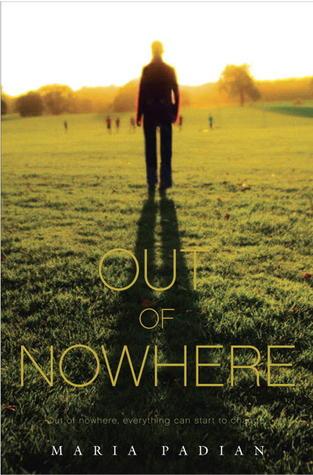 Photo: "Out of Nowhere" has a good message.

Photo: "Out of Nowhere" has a good message.

One of the novel's fallbacks is that it is incredibly plot-driven, leaving its characters lacking realism. Tom's voice at the novel's start does not seem to contain the aspects and quirks that a teenager would have. Other characters are written flat: Somali student Saeed is simply "good," conservative Uncle Paul is simply "close-minded." The message is sincere, but the way it is delivered is a bit too convenient.

While "Out of Nowhere" isn't perfect, it's certainly a read that anyone can appreciate. Padian does a fantastic job of introducing her audience to heavy issues in a relatable way. Her take on the coming-of-age novel is refreshing and enlightening, and definitely worth a read.

"Out of Nowhere" by Maria Padian is one of the nominees for this year's Black-Eyed Susan Book Award. Silver Chips Online will be reviewing and ranking all of the nominees, so make sure to check back for more reviews.