The lunch bell has rung. But instead of heading for the SAC, pulling out a lunch to eat or standing in the cafeteria line, Amy, a junior, walks straight out the Colesville side door. Ignoring Blair's closed lunch policy, she leaves campus for McDonald's, risking suspension for a bite of freedom and fast food.

"At lunch, people just think you are going out to fields or to the track," she says. "Then you keep walking."

Ever since Blair moved to its new location in 1998, open lunch has been prohibited because of the dangerous traffic patterns of the area. To reach McDonald's or Starbucks, students must cross at least one of the two major streets, University Boulevard or Colesville Road, which have a constant flow of heavy traffic. But some Blazers are more than willing to cut across the busy streets to buy food from the variety of fast food places in the area. Blair is not alone in the restriction of lunch; the majority of Montgomery County high schools also have closed lunch policies.

Some Blazers sneak off because they find the cafeteria food so unsatisfactory. "The school food is so bad," says John, a senior. "I've gotten bad strawberry milk from the lunch line three times. It's solid, you can feel flecks."

Craving something a little more palatable for lunch every once in a while, John recalls driving with his friends off campus to find food more to their liking; not only in the nearby Four Corners restaurants and stores, but in Downtown Silver Spring. 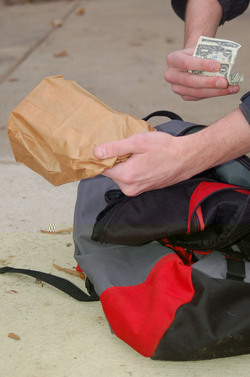 Amy has been sneaking off campus during lunch since second semester last year. She reports that while she's not alone on her off-campus ventures. "A lot of kids do it, and they do it a lot," she says. "It's pretty easy to get away with it."

Amy and her fellow Blazers say they have been able to leave the campus effortlessly, right under the noses of security that, in her opinion, doesn't seem to notice or care. Amy recalls walking past a security guard and a police officer, who were standing in front of the building without attracting notice. "They didn't say anything," she recalls. "For a long time, it felt so easy, I thought I would never get caught."

But the day after Amy made it past security without any heads turning, she and a friend were stopped by a security guard on a bike patrolling the grounds. He demanded their IDs, and Amy was sent to the administrators' office.

Despite her punishment, Amy still occasionally sneaks out to McDonald's or Four Corners, feeling that it was mainly bad luck that she was caught that day. "There was a teacher at McDonald's that lunch," who, recognizing that there were many Blair students there, Amy speculates, "called security and told them to look out for Blair students walking back." Except for that one time, Amy says she has been able to leave and come back effortlessly.

John, on the other hand, has quit his mid-day runs for a different reason: there's someone else willing to do it for him.

Taking a risk for profit

Like many other students who leave campus during lunch, Max, a senior, didn't like cafeteria food. In the beginning of his junior year, when he first got a car, he started going out for lunch. Soon, his friends starting asking him to bring some food back from them as well.

"I took orders, but that got too complicated," he says of his friends' requests.

Now he just brings back a sack of beef patties to sell from a restaurant in Silver Spring; a noontime hunger that has turned into a booming business so successful that he often sells out every time he brings food. Sometimes, he reports, he doesn't even have any left over for his own lunch.

Max recounted when a customer was so desperate for a burger that he offered more than twice the asking price. "One time I had this last one and I was going to eat it but [a Blazer] wanted it really badly. He gave me $10," far above the price he usually charges, he says. Although he usually buys around 30 beef patties, he still sold out the time he bought 60.

Thirty patties do not fit that well into a single back pack, so Max usually tries to bring a friend along to help him get the patties into the school without arousing suspicion. If security guards are around, he will either wait until they leave or come through another entrance.

"I just walk out and walk back," Max says, explaining the ease of sneaking in and out of Blair. It's easier to leave, he says, because then security thinks he is leaving for the day, as many students with half-day schedules do at the beginning of lunch.

Coming back into the school, he can sometimes be mobbed by customers, both friends and people he does not recognize. Although he chooses an out-of-the-way place to sell (wherever the best place to be out of sight of security is that day), he says that the sudden gathering is a little off-putting. "Sometimes I'm a little nervous because there's a lot of people, and that will attract attention," Max says. He fears large groups of students will draw security in if they mistake the gathering for a fight.

With Max's popular business come profitable returns. He estimates that he has made a couple hundred dollars since he began selling beef patties in his junior year. He makes a 75 cent profit on each patty he sells; buying for $2.25, selling to Blazers for $3.

Even with the popularity of his business, Max still has slow periods, but they don't last long. Last Friday, he had trouble selling during A lunch, but come B lunch, his patties quickly disappeared. With no 5th period class, Max can sell both lunches if he has patties left over.

Through his frequent visits to the fast food joint, he has formed a relationship with the employees. "They know me there," he says. "They give me extras and a discount. [Last year] I was their biggest customer."

Max estimates that he still is one of their major customers, even though the demands of senior year have limited his once daily trips to once or twice a week. His cutback on trips has caused protests among his regular customers. "Some people complain they go hungry because they don't like the school food," Max says.

Although Max says that he sometimes can get a little nervous while he is entering or exiting the school, he feels that the risk of being caught is nothing compared to the profits he has made. So when he has the time, he will still be hanging around at lunch, selling to Blazers hungry for more than cafeteria food.