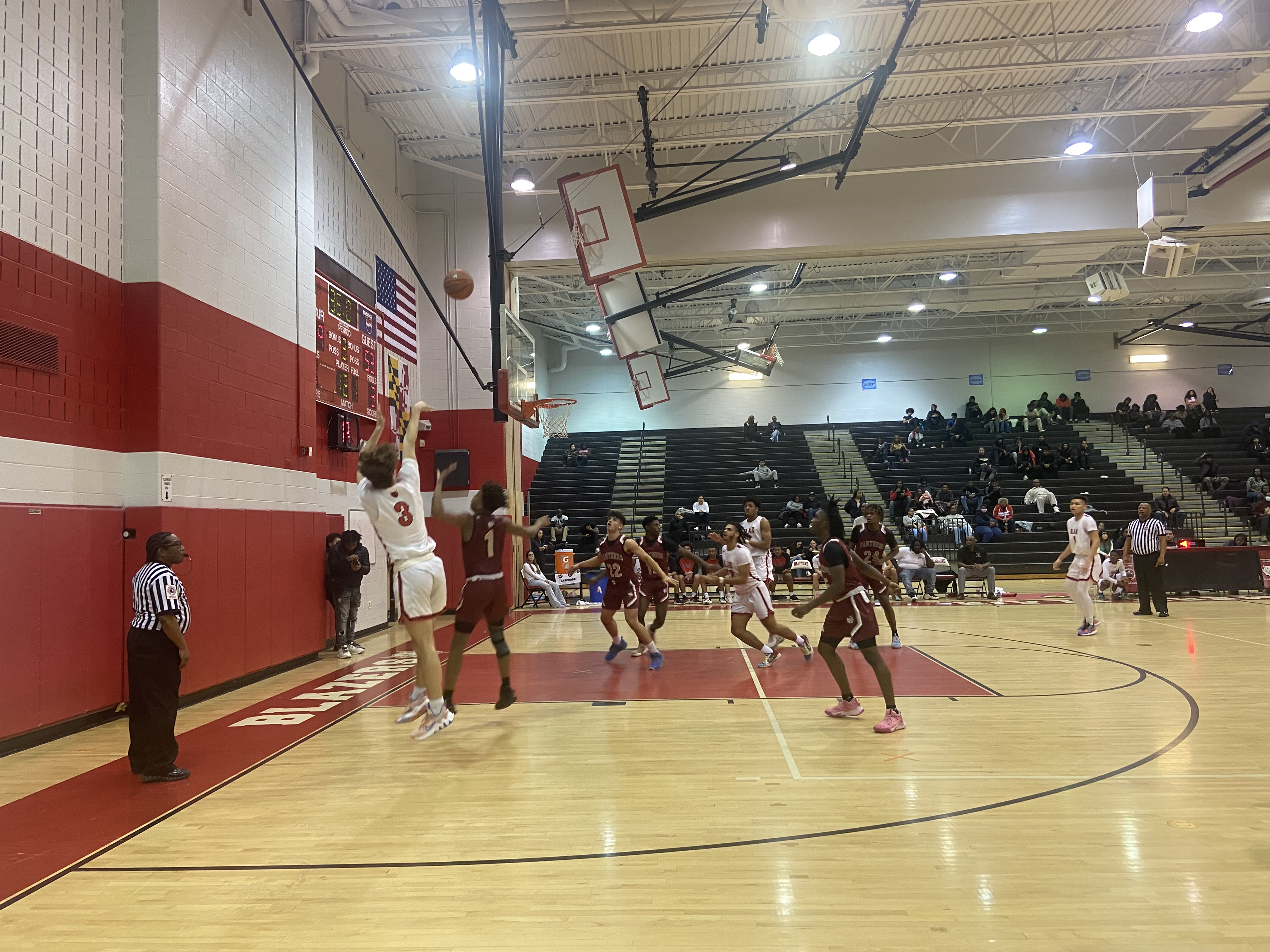 On Jan 11, the Paint Branch Panthers (4-5) beat the Blair Blazers (1-8) in a disappointing game with a final score of 55-68. Players continued to struggle with rebounding and working together as a team, resulting in ineffective offensive plays.

The first quarter started off on a positive note, with Blair’s senior guard Eli Greenberger scoring a three pointer a minute in. The Blazers added to this energy by scoring again twenty seconds later, but Paint Branch started to retaliate. The two teams battled back and forth throughout the rest of the quarter, until Paint Branch pushed through, gaining a 9-13 lead by the time the clock ticked down to zero.

By the time the second quarter started, the Blazers’ problems started to expose themselves. They struggled with connecting passes, moving up the court as a team, and catching rebounds. Paint Branch took advantage of this, scoring over and over again as the Blazers attempted to push back. Greenberger shined in this game, but without a team to back him up, his efforts were ultimately futile. Blair’s downfall ultimately came from their inability to come together as a team, focusing more on individual plays rather than the entirety of the game.

The Blazers pushed back against Paint Branch enough to tighten the lead by the end of the first half, which ended 27-28. Even so, Blair’s offensive and defensive lines were cracking, and it was clear it was not going to be an easy next two quarters for the Blazers.

The second half marked the beginning of the end for the Blazers. Two barely contested threes from Paint Branch found their way into the bucket within the first two minutes of the third quarter. After converting some tough buckets, senior guard Jonathan Pang’s luck seemingly ran out after he went down with what looked like a minor ankle tweak, leaving the score at 39-51 with Blair trailing. Despite walking it off and returning to the court just a couple minutes later, everybody in Blair’s Nelson H. Kobren memorial gymnasium was praying that Pang was okay to play.

He reassured the crowd that he was okay in the fourth quarter when, with the help of Greenberger, he scored a deep three from the left wing moments after he converted a fastbreak opportunity into a pull-up jumper. It seemed as if the clouds were fading for a moment as Blair got their deficit back in single digits.

But before the boys got comfortable with the comeback, Paint Branch did what they do best -- pull away. Poor ball movement and selfish plays led to poor shot selection and what head coach Tony Mensah fears most -- a lack of confidence. While the Panthers looked like a well oiled machine, the Blazers struggled to get a run going near the finish line. Frustrated fans in the bleachers yelled “box out” but the team remained lost, and played with a clear lack of passion towards the later half of the game.

“We need to rebound … to me when you rebound that reflects who wants to win the game. The games that we won, we did a good job at rebounding, we didn’t rebound at all tonight. We don’t pass the ball…we have one guy who comes down and shoots the ball…That’s not mental toughness, it’s selfish,” a disappointed Mensah said post-game.

You can see the Blazers play at home on January 17th vs Churchill. Tickets are available here.