Blair's varsity field hockey team suffered their first home game defeat today, bringing their record to 3-4-1. The Blazers were unable to connect throughout the game and committed numerous fouls and fumbles which led them to fall to Paint Branch's lone goal.

The Blazers started the game with possession, but 10 yard penalties and foot calls stopped any offensive production. The Panthers took advantage of the free turnovers by attacking the Blair defense, but hacking and high ball penalties also prevented them from scoring.

Five minutes into the first half, the Blazers received four consecutive corners after ruthlessly assaulting the Panther cage. The first was stopped by the defense, the next two deflected off of a defender's foot, and the last, a goal from a quick cross to sophomore Eleanor Garlow, was invalidated due to a high ball penalty.

Moments later, a rapid succession of short passes initiated by co-captain Eve Kenney to senior Naima Merella pressured the Panther defense. But, the Blazers were overpowered by the Panthers who were then able to clear the ball. 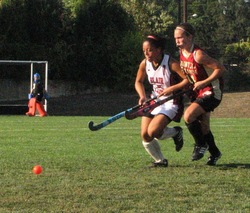 As the first half ran down, both teams fought desperately for possession. The Panthers and the Blazers had many well-placed drives that paved the way for attacks, but neither team was able to capitalize on these opportunities. Crowding, feet penalties and hacking were the major contributors to the scoreless first half.

During the second half, both teams continued to struggle for possession, but Paint Branch began to show more control. Blair started the half with a corner, but players were slow to set up a shot and were rushed by opposing defenders. Paint Branch countered by snatching up a corner as well. Two swift flicks sent the ball heading towards the Blazer goal, both blocked skillfully by junior goalie Katelyn Luker.

It was on another penalty corner that Paint Branch finally scored what would be the winning goal. Eight minutes into the second half, a Paint Branch offender waited behind the Blazer's defensive line. Luker faced the offender alone and was unable to stop the Panther from flicking the ball into the goal.

The Blazers tried to retaliate on yet another corner. A pass to senior Cate McCraw gave her ample time to set up and shoot, but her shot skimmed by the Panther goal post, missing by a couple feet.

Both teams exchanged possession throughout the half as the ball from one half of the field to the other. Kenney's long passes to the center of the Panther goal set up a number of opportunities for a Blazer goal, but no one was in position to send it home. Paint Branch nearly gained a 2-0 lead after a penalty corner, but co-captain Claire Onley speedily rushed in for the save. 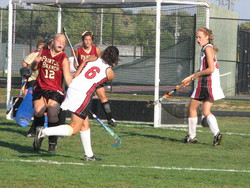 With only a couple of minutes remaining in the half, the Blazers were desperate to score. Blair pressured the Panthers with several more corners and long passes, but poor communication between the Blazers allowed the Panthers to recover possession. After one last unsuccessful corner, the Blazers walked off the field with their first home loss, 1-0.

Senior Iliya Smithka frowned at the result of the game. "It was disappointing in every way," she said.

Head coach Brook Franceschini agreed that today was not the team's best showing. "We just didn't connect well today. Their performance was mediocre," she said. "It's disappointing to lose 1-0 when we're beating other teams by five."

The varsity field hockey team plays its next home game on Friday, Oct. 19 against Einstein at 3:30 p.m.