Passing on his wisdom

Thirty-one… thirty-two… thirty-three… done! Drenched in sweat, the Blair boys' varsity basketball team collapses after completing suicide drills in the gym. The boys may have complained during tryouts, but as the season gets underway, they have learned to be more than grateful for the extra running. Completing suicide drills and enduring long practices are just two of the high expectations that the new basketball coach has for the team, and he hopes that the boys will learn a thing or two about perseverance and discipline from his workouts. 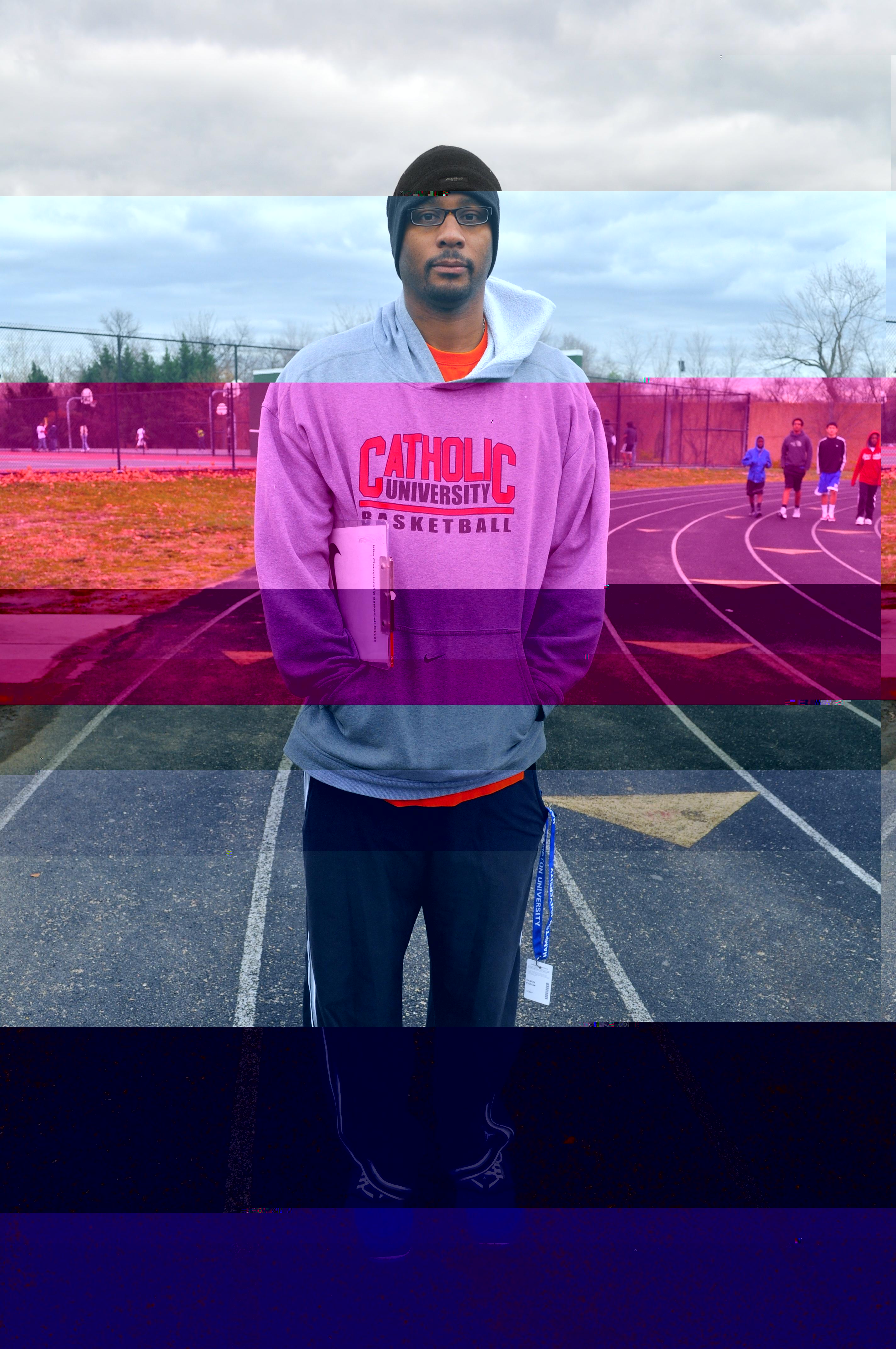 Meet Damon Pigrom, the new general Physical Education (P.E.) teacher and boys' varsity basketball coach. In response to the intensive workouts, Pigrom says, "In order to play basketball, you just got to be in shape." Although this is his first year coaching the team, Pigrom is an experienced athlete and basketball instructor. He plans on bringing his life experiences to the table in order to improve the Blazers' game.

Pigrom is not new in teaching in a high school environment. He has been in the Montgomery County Public School (MCPS) system for 14 years and has coached several successful high school basketball teams, including James Hubert Blake and Bethesda Chevy-Chase (BCC) High Schools'. However, last year, Pigrom found himself in an awkward situation in terms of teaching while coaching. "Last year I taught at Blake, but I coached for BCC," Pigrom says. "It hurt my reputation as a basketball coach and my relationship with the students."

But now, Pigrom is all Blair, and so far he likes the school's environment. He admires the charisma of the students in his sixth period basketball class and has grown fond of his co-workers. "It's been good; the kids are cool and respectful and I really like the department I work with," Pigrom says.

Robert McMahon and Emanuel Charles, P.E. teachers who work with Pigrom, both admire Pigrom's dedication to the game and his contributions to the Blair. "He is an excellent addition not only to the Blair athletic department, but also to Blair's basketball team as coach," McMahon says. "He is knowledgeable and passionate, and relates with both his students and his players."

Before he saw his career in basketball, Pigrom wanted to own his own sports bar. "When I was young, I had aspirations to open up a sports bar and call it the "Pig Pen,'" Pigrom says. "Get it? Because my name is 'Pig-rom,' but ironically, I don't eat pork."

Later on, he set his sights on basketball. To Pigrom, not only was the sport enjoyable, but it also taught life lessons. When Pigrom was a sophomore in high school, he was cut from his school's basketball team because he was out of shape and did not put enough effort into the game. Pigrom had the revelation that the only way for him to be successful was to work hard and get focused. "I was upset, out of shape, but I put myself in a position to do better," Pigrom says. "I became disciplined, worked harder, got a scholarship and went to college and it has been good to me."

Pigrom spent the rest of that year working on core exercises and playing basketball locally and, as a result of his hard work, he played on the varsity team in his junior and senior years. Later, he went to Hampton University on a basketball scholarship and was thus able to pursue his dream of playing in college. "It was a big opportunity for me," Pigrom says. "The greatest lesson I ever learned was becoming disciplined and it paid off."

Last year, the Blair boys varsity basketball team only won four games the entire season. As depressing as their win/loss ratio was, Pigrom chooses to ignore the past and so he can prepare the team for the future. "Some of the older players look at the past to draw inspiration but I don't do that," Pigrom says. "I don't care how we played in the past, just how we perform now."

Thirty-three suicide runs might seem overwhelming, but according to Pigrom, this exercise will help to shape the players for success. Pigrom plans on doing pure core and running exercises so that the Blazers can make aggressive plays late in the game and keep up with the ball when they run up and down the court. "I play an up-tempo game and if we are going to play this style, we need to press the other team and run a lot," Pigrom says. "Our immediate goal is that we just got to keep on playing better."

Junior guard Justin Kung believes that Pigrom serves as an inspiration to the team because he is knowledgeable and he encourages the players to keep trying. "Pigrom breaks down the defense tactics step-by-step for us to understand," Kung says. "He has a demeanor that encourages us to keep on playing, and it disciplines us."

Pigrom might be new to Blair, but he is already shaping up to be the pillar for the basketball team's success.