Blair Varsity field hockey (2-5-1) successfully held the notorious Wootton Patriots (10-1) Thursday night, though loosing 0-3. Wootton, known for their aggressive and impressive play, did what they always do in the rout. Blair however, played an incredible game but just couldn't keep pace.

When the Blazers came out on to the field, they knew it was going to be a tough game. "Wootton is known to be really good and they have quite a few really good and strong key players. Our goal was to hold them," senior attacker Nicole Spiezio said.

From the start of the first half, the game was action-packed. Wootton started out as the attack, when senior attacker Maddie Boyer intercepted and gained possession of the ball. She made a smooth pass to senior midfielder Luisa McGarvey. When a Wootton defender almost stole the ball back, sophomore Lea Watkins-Chow saved it and passed to senior midfielder Sabrina Zhou. Zhou carried the ball all the way down the field, before a Wootton player made a hard drive towards the Blair side of the field. 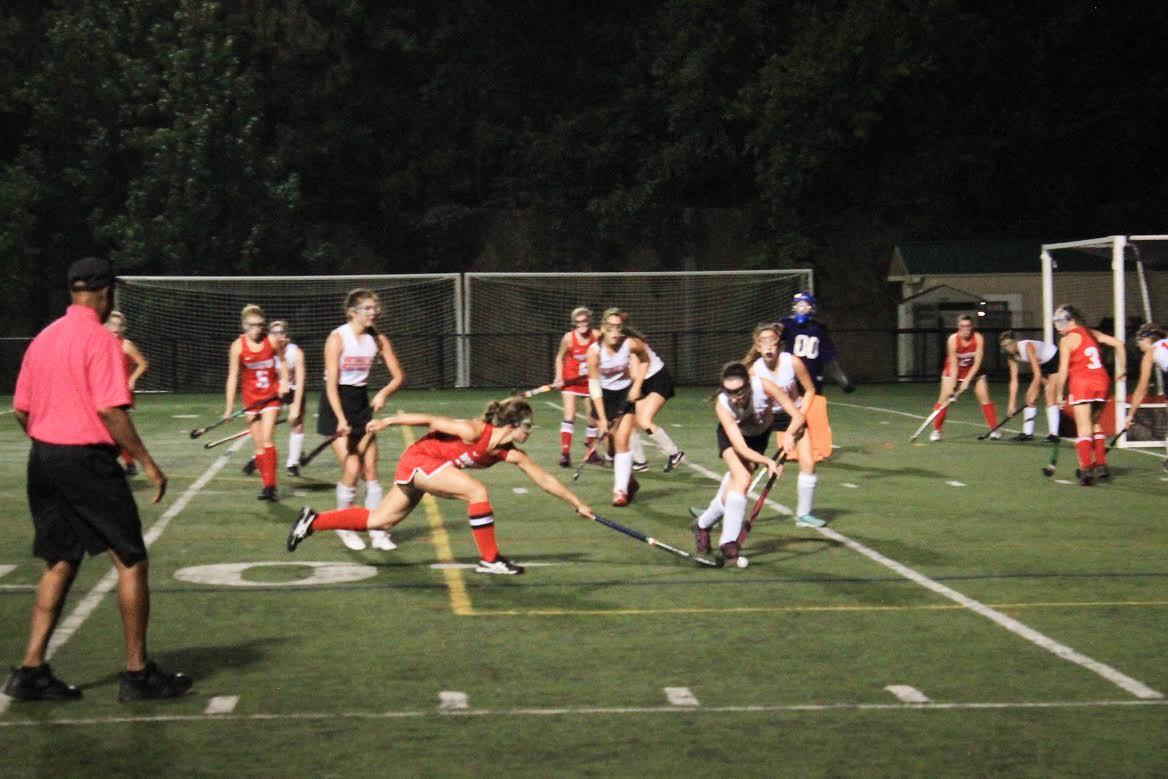 Fock til u drop

Photo: The Blazers and Wootton players converge on a ball.

Photo: The Blazers and Wootton players converge on a ball.

Blair's defense shone as they worked to contain the other team. When the Patriots attempted to make a shot, Blair crowded around the goal and worked to defend every attempt. Only eight minutes in, Watkins-Chow got ahold of the ball and passed to Spezio, when Blair received a penalty corner. Boyer took the corner and drag flicked the ball to senior midfielder Anna Reachmack. Senior midfielder Leah Messina took over, when it was intercepted by Wootton until McGarvey took it right back.

Wootton marked each Blair player meticulously to gain possession of the ball. They took the ball back to the Blair side after two minutes. Wootton continuously attempted to hit the ball into the goal, but Blair players communicated effectively to block them. But, one shot slipped by with 17 minutes of play left.

After the first shot, junior attacker Marianne Benyamin increased her defense and she marked Wootton tenaciously. She jabbed the ball until Wootton lost possession and handed it over to junior attacker Nika Seider. Wootton intercepted at and carried the ball across the field and made a goal, bringing the score to 0-2 with 14 minutes left. Wootton got ahold of the ball with a penalty corner when Blair fouled, and was able to make another goal six minutes later.

Blair attempted to change their strategy after Wootton was able to make three shots in the first 20 minutes. "They have a really good players on the right side, so we were really just trying to contain them so they just couldn't get past us, and just not to overcommit or anything," Spiezio said.

To get the ball on Wootton's side, Benyamin weaved the ball past the defenders and made a back pass to Spiezio. Spiezio pushed the ball, when senior attacker Adina Rombro drove the ball. Spiezio ran to maintain possession of the ball, but Wootton defense came in from behind and abruptly took back the ball. With the first half ending, Wootton struggled to make another shot. Senior goalkeeper Susana Perez was able to block a shot with two minutes left in the game, keeping the score at 0-3.

The focus of the second half was to prevent Wootton from scoring any more goals. Only five minutes in, Perez blocked a number of attempted shots with her stick and her chest. Blazers worked together to block shots, especially from the right side. Spiezio tried to turn the game around and started to carry the ball down the field. She made a blind pass, so that Zhou was unable to catch her pass, and Wootton gained back possession of the ball.

Blazers utilized impressive defensive skills to keep the score stable in the second half. With only two minutes left in the game, senior midfielder Anna Hukill got the ball and ran it down to Spiezio. Spiezio made a back pass to Hukilll, who carried the ball down to the goal. She almost made the goal, when the buzzer sounded.

Even though field hockey could not grab a win, they valued their loss. "We definitely learn a lot every game. We improved keeping our sticks down on defense and recovering back. We tried to carry it wide a lot. Obviously, we had to play a very difficult team, which really pushed us to do our best. I'm pretty happy with the way it turned out," Watkins-Chow said.

The Blazers next home game is on Thursday, against Northwest.