Down five players, girls' basketball falls in second half

The shorthanded Blair's girls' varsity basketball team lost to the Wootton Patriots in a disappointing home game on Friday, 66-41. Although the Blazers kept up with the Patriots in the first half, their lack of players eventually took its toll in the second, after the Patriots stepped up their defense while putting together a series of unanswered runs.

It was an ominous opening, with seven Blazers pitted against twelve Patriots. The discrepancy between the number of players on each side was due to several illnesses on Blair's side, and this contributed greatly to the Blazers' struggles late in the game. 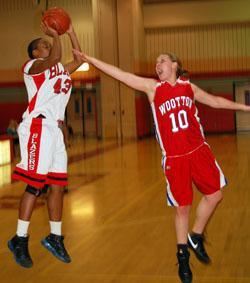 In the first quarter, the girls were evenly matched, as the Lady Blazers found their rhythm in matching baskets with the Patriots. Junior Jenny Williams was crucial in this respect, scoring ten of Blair's eleven points in the quarter. The Blazers ended the first quarter on the Lady Patriots' heels, facing just a 12-11 disadvantage.

The game sped up drastically in the second quarter, as both teams played impressive defense with steals by both sides. But strong rebounding by the Patriots and a series of missed Blair shots soon led to a five point scoring run by Wootton. The lockdown defense continued, as the Patriots started to double-team any Blazer that had the ball, making it even more difficult for the Blazers to even move the ball down up the court. Wootton also committed many more fouls in the first quarter, with nine fouls to Blair's four.

Despite the adversity, the Lady Blazers were still able to keep the game from getting away from them. During the period, junior Ashley Arnold scored three points, senior Kalisha Holmes scored three and Williams scored four to make the score 24-21, Wootton, at the end of the first half. 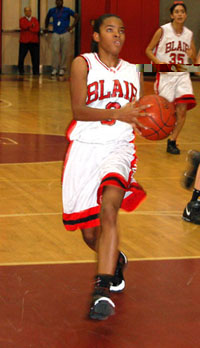 At the start of the third quarter, it appeared that the Patriots kicked it up a notch, not just double teaming, but using a full court press to halt the offense and run down the clock. This increased pressure on the guards caused the game to slip away for the Blazers.

"We got tired," said head coach Erin Conley. "Our guards were out there the entire time. We got beat on some fast breaks." Several shots that needed to go in did not, and Wootton pulled ahead with a 10 point lead that Blair would not recover from. The Blazers ended the third quarter down 13 points, 46-33.

It was more of the same in the fourth quarter, as Wootton continued to use a full court press to tire out the offense, increasing their lead to 20 points. Like in the first half, Wootton fouled more frequently than Blair by an eleven-to-five margin. On the times that Blair was able to move the ball across the court, they showed that they were a force to be reckoned with. Unfortunately, the eight points they scored in this quarter was not enough to come back and Blair ended the game with a loss, 66-41.

Despite the loss, Conley spoke positively of the Blazers' performance. "I think we played amazingly," she said. "We did everything we could with no subs and no bench against one of the best teams in the county."

The Lady Blazers play their next game at Blair versus the Churchill Bulldogs at home on Dec. 19.