Pencil in some primetime

The labor dispute at the core of the Writer's Guild of America strike cost billions of dollars and put thousands of people out of work, but most viewers can only testify to one travesty: falling out of touch with weeknight television. Many shows will either resume in the next two months or be re-launched in the fall, and Silver Chips Online has the details on what to expect and what not to miss for all those suffering from primetime amnesia. 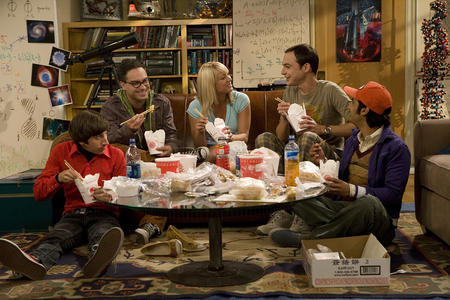 Revisit these two gaming, goggling geeks in their Odd Couple-like living arrangement across the hall from hottie neighbor Penny. In the first half of its rookie season, "Big Bang" - now switching timeslots with "How I Met Your Mother" - saw the boys racing after Penny as a lover, friend, life coach and Halo teammate. Expect more of the same; the show may not transcend stereotypes, but it certainly fills the sitcom void.

Watch this! March 17: How I Met Your Mother (nine new episodes)

Earlier in the season fans got a tiny hint as to who the future "mother" is. Surely more clues are on the way but meanwhile, the five best friends in this show - narrated from the perspective of an aged Ted to his teenage kids - are most absorbing. When the season was interrupted, Robin and Ted were still nursing a just-friendship while dating other people, and Lily and Marshall were enjoying wedded life. The first new episode will be St. Patrick's Day themed - think lots of drinking and Barney in a shamrock suit - and the season will revisit Robin's pop-star past as Robin Sparkles, with another single and full-length video to appear online. To top it off, People magazine has reported a Britney Spears guest spot. 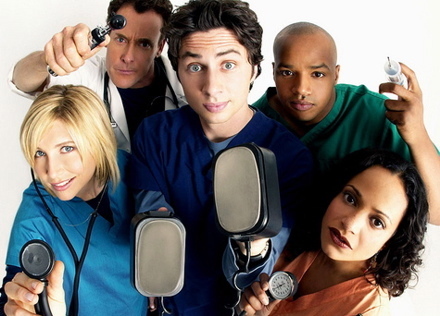 April 3: My Name is Earl (up to seven new episodes)

To find the silver lining, at least the strike pushed back the end of one of the best hospital shows on TV. Now in the middle of its last season, "Scrubs" better continue to wow viewers. To recap, J.D. and Turk are both learning to be parents - J.D. struggling with his baby's distanced mother and Turk always scrambling to appease his wife Carla. Before the break, J.D. had been voted best doctor online and let it go to his head, while Carla embarrassed herself by doubting the Janitor's love life.

Watch this! April 10: The Office (six or seven new episodes) 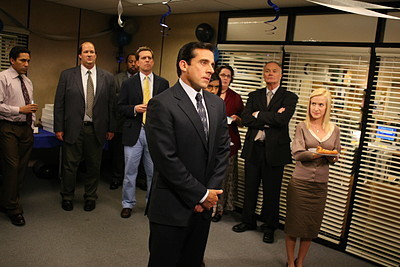 When PB&J last graced television screens - that's office sweetheart Pam Beesly and her dreamy cubicle boy Jim, if you have been living in a box for the last four heart-wrenching years - they had finally affirmed their love for each other and entered into a semi-secret relationship. They even survived the ultimate test - a trash talk-infused ping-pong match against Kelly and her new boo Darryl. No such luck for Michael, whose ridiculous relationship with girl-fiend Jan, who most recently published his personal diary, may finally be coming to a close. 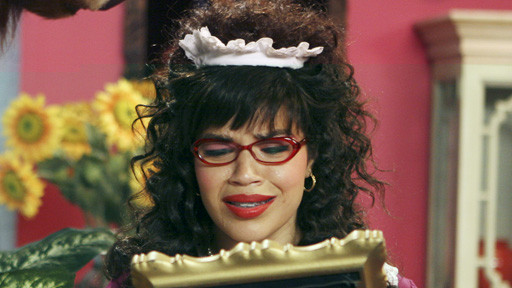 In Entertainment Weekly, executive producer Silvio Horta recently described a general "re-energized" feeling for these upcoming new episodes, even though there are fewer than originally planned. America Ferrera - and not just her braces - dazzles as Betty, a deviation from the typical blonde bombshell in the fashion industry. Betty is stepping outside her comfort zone, making her love interest Henry jealous, while evil Wilhelmina is using his sperm as a pawn for control of the Meade empire. That became tricky to hide when Daniel started seeing her sister. Meanwhile, Amanda has finally met her birth father, Gene Simmons. If that's not exciting enough, look out for a Lindsay Lohan cameo expected soon.

Creator Shonda Rhimes announced this week that over the break she reevaluated the plot, and now plans to reinvest the show in a long-term Meredith and Derek relationship, according to Entertainment Weekly. That's not all - McDreamy's recent hook-up Nurse Rose and Alex's once-infatuation Jane Doe will be back too. 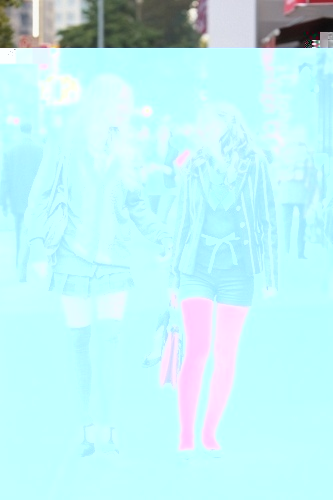 "Gossip Girl" was addicting in novel form, but viewers cannot get enough of the freshman TV adaptation. Revolving around a group of New York City elite socialites and their hard partying ways, as documented by the omniscient blogger "Gossip Girl," the show is a terrific break from the mid-week burnout, whether you are actually following the plot or just watching for easy laughs. "Gossip Girl's" latest dish is that Blair slept with her boyfriend's raunchy best friend Chuck. The source of the gossip is aspiring it-girl Jenny; the position is open now that Blair's image has been destroyed and her best friend Serena is pursuing other interests like her stud-muffin boyfriend Dan.