Management needs to improve in order to increase company effectiveness

After a string of torrential thunderstorms throughout the months of July and August resulted in widespread power outages in the Montgomery County area, Pepco customers grew annoyed and impatient at the electric service provider's incapacity to fix their customer's power. According to Energy Business Review, Pepco recently outlined a five-year plan that includes updating underground cable from the 1970s; the plan was created in an attempt to increase Pepco's reliability and efficiency when storms occur. Pepco needs a reality check – it's not the equipment that needs to be replaced, it's the company's management. 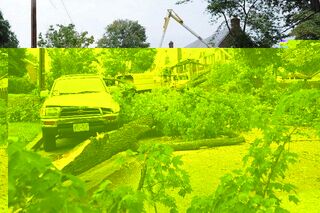 Photo: Pepco has been criticized for its failure to quickly restore power to DC area homes.

Photo: Pepco has been criticized for its failure to quickly restore power to DC area homes. Photo courtesy of The Washington Times .

In an Aug. 23 blog post from WashingtonPost.com, local resident R.H. Dogett explained the lack of attention that Pepco pays toward its current cable system. "All of [the lines] are overgrown with tree limbs, wild grapevines and other vegetation. The lines have looked like this the entire time I have lived in this area,” he wrote. "Obviously, they are not inspected or maintained regularly. If Pepco does not inspect and maintain what it has now, I can't believe that it will do any better at maintaining updated equipment.”

Dogett brings up a crucial point – even with the best equipment that money can buy, a company with lackluster management is incapable of being efficient. Not only does Pepco not inspect their lines, it also makes lazy mistakes that are easily avoidable. In addition to being extremely slow in fixing service, Pepco also had trouble with its caller response technology, which gave incorrect estimations of when power would be restored during this summer's storms.

All signs point to poor work ethic on the part of Pepco's employees, not faulty equipment. Fortunately, Pepco is regulated by the state, and Maryland officials reacted skeptically to Pepco's new plan. If Pepco would just admit their mistakes and make a commitment to improving their response to outages, then customers would feel a whole lot better. Instead, it seems that Pepco is attempting to use slightly out-of-date equipment as an excuse for their blunders.

Pepco's inefficiency is bad; the fact that the company continues to stick up for its actions is worse. According to a news story in The Washington Post, Pepco officials defended their response to major service disruptions at a hearing on Tuesday. The article states that Pepco blamed the outages on trees falling on private property whose owners do not allow access to Pepco tree-trimming crews.

The one thing that everyone can agree on is that Pepco must improve its effectiveness. In order to do so, Pepco has to look in the mirror and realize that what's needed is a major personnel overhaul, not a costly cable upgrade. That's the only way that Pepco will satisfy its 800,000 customers in D.C. and suburban Prince George's and Montgomery Counties. If they don't, then we're all in for a rough hurricane season come this fall.