Smells waft in the air, a rich and overwhelming odor of fish heads, dirt and sweat. Herbs hanging from stalls sway stiffly in the warm wind as patrons, smelling both rich and poor, shop at the market. Beneath one of the stalls a new smell has just entered the world: that of the infant Jean Baptiste Grenouille, the star of "Perfume: The Story of a Murderer."

Based off of Patrick Suskind's novel of the same name, "Perfume" is the most expensive movie ever made in Germany, as of 2006. Directed by Tom Tykwer of 1998's "Run Lola Run," the film follows Jean Baptiste Grenouille, a Parisian orphan born with an acute sense of smell but lacking a personal odor. As an adult, Grenouille travels from Paris in a quest to create the perfect, virginal scent with horrific results. 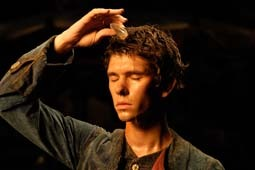 Directors, including Stanley Kubrick and Martin Scorsese, have stated that "Perfume" was such an powerful novel that it would be impossible to film. Despite these claims, Tykwer excels at directing the film, making every odor, action and character believable and real. However, although necessary, the narration (done by John Hurt) is stiff and awkward. Hurt's commentary on the killer's life provides insight that the terse Grenouille would have kept hidden. Despite this factor, the narration splits the film into choppy segments in an otherwise fluid story.

Early in the film Grenouille learns from the perfumer Baldini (Dustin Hoffman) that fragrances are music-like, having four chords. The first chord is the top notes, noticed first and briefly; the second is the middle chords that last for up to an hour and the third is the base notes, which last for days. The final chord is an added mystery odor that makes the scent unique. Like the perfume, the film can be broken down into chords based on power, style and length.

For the beginning of "Perfume," the most intense part of the film is the cinematography. From the filth ridden alleys of Paris to the gruesome birth of Grenouille, the shots and sets are meticulously planned and designed. However, the intensity of the sets fades, making room for the middle note: the acting. Whishaw, for whom "Perfume" is a break through role, changes himself physically and mentally in order to play the role of the perfumer turned murderer. More seasoned actors, such as Hoffman and Alan Rickman (who plays the merchant Antoine Riches,) provide balance in Whishaw's performance.

The longer lasting affects of "Perfume," or the base notes, are the themes of acceptance, humanity and rejection that the actors convey. Understanding the actions of both the killer and the victims provides further explanation. For Grenouille the final note, the one that makes the perfume unique, is Laura (Rachel Hurd Wood of 2003's "Peter Pan"), the beautiful daughter of Richis. For the viewer, the final chord is what viewers get from the movie: a sense of wonderment, thoughts of confusion or satisfied contentment. Like a truly powerful scent, the scent of "Perfume" won't fade.

"Perfume" is rated R for aberrant behavior involving nudity, violence, sexuality, and disturbing images. It is playing at E-Street Cinema and Bethesda Row.