"Pericles" in the park

Holding a performance outside is always a risky idea; between the biting bugs, unpredictable weather and complicated acoustics, audiences are usually scarce. For Shakespeare Theatre Company's "Pericles," though, open-aired Carter Baron in Rock Creek Park provides the perfect setting. Instead of detracting from the performance, the mystique of the woods adds to the sense of intimacy the humorous play conveys. Skillfully acted and creatively directed, "Pericles" is a wonderful experience and, best of all, it is free.

"Pericles," adapted from the ancient Greek tale of Apollonius of Tyre, was originally directed by Mary Zimmerman, but was later taken over by David Muse. The performance follows the life of Pericles (Thomas Hammond), the Prince of Tyre, as he makes his way from kingdom to kingdom, facing incestuous kings, traitorous governesses and antler-clad deities. Pericles starts his journey in Antioch where he has to answer a riddle in order to marry King 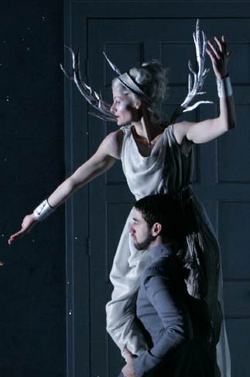 Antiochus' mysterious daughter. Unfortunately the answer reveals an incestuous relationship, forcing Pericles to flee from Antioch. A fierce storm shipwrecks Pericles in Pentapolis, where he is rescued and brought to the palace of King Simonides (John Tillotson). Pericles then competes and wins the hand of princess Thaisa (Julia Coffey), with whom he has a child named Marina (Marguerite Stimpson). Thaisa appears to die at childbirth with Pericles casting her coffin into the sea, resigning himself to grief. Thaisa, however, is magically revived in Ephesus. Thinking that Thaisa is dead, Pericles gives his daughter to friends Cleon (Joseph Costa) and Dionyza (Michelle Shupe) to be raised in Tarsus. Dionyza soon grows jealous of Marina's moral and physical superiority to her own daughter and plots to have her murdered. This plot fails and Marina is stolen away to a brothel in Mytilene where she convinces the governor, Lysimachus (Jesse Perez), to help her escape. Despite Marina being free, the family remains separated and grieving the loss of one another. With the appearance of the goddess Diana (Michelle Shupe) eerily floating across the stage, though, hope is restored that the family may finally reunite.

Despite the complex and slightly convoluted plot, superior acting keeps the play flowing naturally. Hammond performs gallantly as Pericles, tackling his character's rising and falling emotions as smoothly as the silk sheets used to represent the sea. Marina's innocence and poise comes naturally to Stimpson, who develops her character effectively despite being introduced in the later quarter of the play.

The older, more experienced actors, such as Tillotson, who plays King Simonides, and Bernard Burak Sheredy, who plays Helicanus, a lord of Tyre, did not steal the stage from the younger actors, but gives much more memorable performances. Their presence on stage gives much needed wisdom, authenticity and humor to the play. Tillotson is brilliantly casted as the jovial Simonides and brings the audience to tears of laughter with his over exaggerated expressions and witty asides.

The challenge brought forth by the constantly shifting geography in "Pericles" was dealt with gracefully through artistic director Michael Kahn's creative use of the stage. By incorporating the scene changes into the play and making use of the rows of small drawers set discreetly into the stage walls, the play flows smoothly from one setting to the other.

The Shakespeare Theatre Company masterfully performs "Pericles," one of Shakespeare's more difficult plays to produce, incorporating mysticism, sadness and, most of all, humor. With its talented cast and aesthetically savvy directors, "Pericles" is worth seeing even if it did cost money.

"Pericles" is playing at Carter Baron through June 4 at 7:30 p.m. Up to four free tickets are available to theatre goers. Tickets can be picked up the day of the performance at The Washington Post (1150 15th Street NW), The Shakespeare Theatre Company (450 7th Street NW) or the Carter Barron Amphitheatre Box Office (16th Street & Colorado Avenue NW). Lines form early at all three locations. For more information on getting tickets visit the Shakespeare Theatre's website.