Peterson Cos. does right, allows photography

The recent ban on photography in Downtown Silver Spring caused enough uproar to start a protest, a photographer rights group and now a change. Peterson Companies., the corporation who once claimed that Downtown Silver Spring is private property, has backed down and allowed photographers to freely take pictures in the area again. Nevertheless, these actions seem overdue and still leave the question of why the ban was placed to begin with. 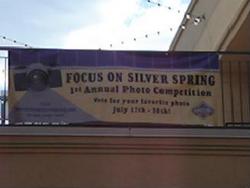 The ban started in mid June, when Silver Spring resident Chip Py was told to stop taking pictures of the buildings on Ellsworth Drive. The security guards on the premises claimed that Py was on private property controlled by Peterson Cos., the company who developed Downtown, and that photography was not permitted.

Day or night, Downtown Silver Spring is active with people walking on the streets and experiencing the area's many shops and restaurants. On first thought, such a place would seem to be a public area, and it most certainly can be defined as such. "The county considers Ellsworth Drive to be a public forum permitting the free and unfettered exercise of First Amendment rights by residents of the county and its visitors to the same extent as those rights are exercisable by residents and visitors to the county on any public sidewalk or public street within the county," said Montgomery County Executive Ike Leggett in a letter to Peterson Cos.

County tax dollars accounted for $100 million of the $400 million it has taken to develop the new downtown, according to County Council member Marc Elrich. In addition, not only do Montgomery County police and fire departments both operate Downtown, but there were no previous signs indicating that the area is private property. The argument that Ellsworth Drive is private is a false claim because the area is owned under Montgomery County municipality, making it a place of public access. Only in this case, Downtown is under private management, but not ownership.

It is understandable that Peterson Cos. would want to protect themselves and their property. But according to Mongtomery County law, the developer is required to give the public access to the managed area. The company claimed that Downtown is similar to a mall – private property and under the private jurisdiction – giving them the authority to ban photography, similar to the way they banned the distribution of political fliers in Downtown.

To make unsupported and false claims that a public area can be treated as private property and then to go so far as to make up new laws for Downtown is just childish. Hopefully personal freedom can be further restored, because photography is not the only ban unjustly placed on Downtown.

Now it is time to truly undermine the false claim that Downtown is under private ownership. The ban on political fliers should be rightfully lifted to ensure municipality ownership and freedom of the public. Also photographers should now practice their right to take pictures in the First Annual Photo Competition, sponsored by Peterson Cos.

One thing is certain; the protest held on July 4th to challenge the photography ban and Ike Leggetts's actions can be considered successes, because now the public can photograph freely in Downtown Silver Spring.