Pharrell Williams is a super-genius here to save the summer. A superhero for the fate of popular music, he scoops the tracks he produces and lifts them to the very top of the Billboard charts, where he then broadcasts grooves to make the world dance. 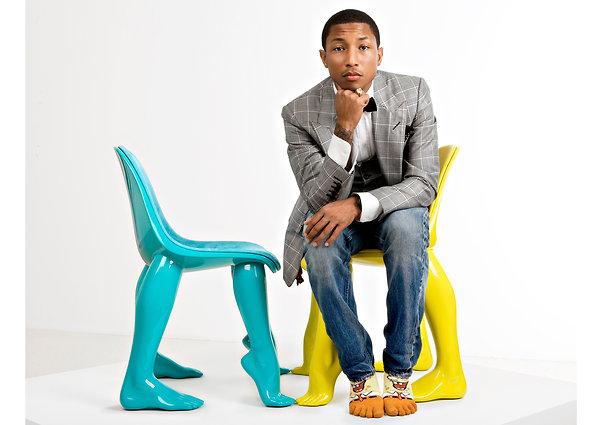 Photo: Pharrell is saving the world, one pop hit at a time.

Photo: Pharrell is saving the world, one pop hit at a time.

Operating under the single name Pharrell, this musical super genius has managed to dominate the summer with his cohesive lyrical style. The smash hit "Get Lucky," Daft Punk's collaboration with Nile Rodgers and Pharrell, has reached #2 on the Billboard charts and still remains in the top 5 spots. The Pharrell produced track "Blurred Lines" is #1 on the Billboard charts. Presently, "Despicable Me 2," which features a Pharrell soundtrack, anchors a spot at #3 in the box office.

Amongst all this, perhaps Pharrell's most elusive super power resides in his seeming inability to age even as he constantly works and provides harmonious wisdom. No one wants to believe he's 40 years old.

This year, besides working on an entire movie soundtrack, Pharrell has worked most extensively with the band Daft Punk on its album "Random Access Memories." He's lent the songs "Get Lucky" and "Lose Yourself to Dance." The first track on the album is "Give Life back to Music." That's what Pharrell's all about.

Last year, the biggest song of the year featured the embarrassingly catchy lyrics "Hey I just met you/And this is crazy." This year, within the first line, those lyrics have morphed into, "Like the legend of the phoenix/ All ends with beginnings.” Buoyed with Nile Rogers's rainbow guitar flare and Daft Punk's glamour 70's robots, "Get Lucky” is a retro hope for a classy sound of the future, courtesy of Pharrell.

This is especially prevalent on Robin Thicke's "Blurred Lines," which Pharrell produced. Even so, "Blurred Lines" hasn't garnered so much controversy for its bouncy bass or its metallic rhythms, rather its content and delivery of the song. Much of this disgust is targeted at Thicke.

Thicke didn't handle the controversy too well, sarcastically ranting about the joy of objectifying women. Pharrell classily handled the situation as he explained in Rolling Stone, "I know the video has caused some controversy, but my admiration for women supersedes anything I could ever say. We all come through the conduit of the bodies of beautiful women." It shouldn't ever be super for a man to defend sexism, but it helps to know that one man can present his argument eloquently and with calm assurance. That's super.

Even though he produced the soundtrack of a movie, Pharrell is a super micro-manager of his own life as well. Pharrell's brand, Billionaire Boys Club, just celebrated its 10th anniversary. It also harbors two other sub-brands and its stores sell in Hong Kong, New York and Tokyo. The mogul also manages the YouTube artist's hub I am OTHER, which houses such popular series as "Awkward Black Girl," "Nardwuar," and "StereoTypes." Pharrell's multitasking between businesses on two continents, YouTube series and smash hits is super multitasking.

Pharrell has the power to simply be himself. He might work with the bourgiest of celebrities, and countless projects, but he still knows who he is. A modern superhero, his fun energy radiates through turned up radios and free dance moves.

Maybe it hasn't only been pop music he's saved this summer. Maybe its the people listening to it. Somewhere, seeping into teenage souls is that inspiration to work hard because he shows it is possible. Somewhere, there's Pharrell's inspiration to help others find their voices. Somewhere, there's the "woo!" in the teenage soul that lets kids just be themselves and show it. Every time you blast "Get Lucky" or "Blurred Lines," Pharrell frees you to lose yourself to dance. He frees you to sing at the top of your lungs. He saves those moments so you can live your most original life. That way, you can become your own superhero.